At an Armed Services Committee hearing on Wednesday, Senator John McCain attacked reporting by our guest, Aaron Glantz, on the University of Phoenix’s deceptive recruiting practices that prompted the Pentagon to put the for-profit school on probation for deceptive recruiting practices. The move was welcomed by consumer advocates and veterans groups. We air an excerpt of the report for Reveal from The Center for Investigative Reporting and get Glantz’s response.

AMY GOODMAN: Aaron, before we go, I wanted to turn to a very different issue, and it is the issue of Senator John McCain. I want to ask about your reporting on Senator John McCain during an Armed Services Committee hearing. You have said McCain unloaded on you for your coverage of the University of Phoenix’s deceptive recruiting practices. Before we hear from McCain, this is a clip from your original report that aired on the PBS NewsHour.

AARON GLANTZ: Iraq War veteran Dan Dresen wanted to be a social worker so he could help other veterans. University of Phoenix gave him college credit for his military service so he could graduate quickly. That’s what convinced him to enroll. He even got credits for marksmanship.

For learning how to shoot a firearm in the Army National Guard, you got course credits for social work?

AARON GLANTZ: When Dresen went to apply for a master’s in social work at a state university, that school wouldn’t recognize his bachelor’s degree.

DAN DRESEN: I was devastated. I can’t use my degree.

AMY GOODMAN: That report for PBS was part of your investigation, Aaron Glantz, for Reveal and Center for Investigative Reporting, that prompted the Pentagon to put the University of Phoenix on probation for deceptive recruiting practices, the move welcomed by consumer advocates and veterans groups. But this is Senator McCain complaining about that investigation and its results during the Senate hearing on Wednesday.

SEN. JOHN MCCAIN: In 2009, before the administration’s regulatory assault on the for-profit sector, the company’s stock reportedly traded at $86.54 per share. Due to this targeted attack and prior to the release of the Reveal news hit piece, it was traded at around $16 per share and reached a low of around $6 a share shortly after DOD’s unfair probation decision. The purpose of this hearing, in short, is accountability.

AMY GOODMAN: McCain. Aaron Glantz, you’re the reporter behind that investigation that he was so critical of in these remarks. Your quick comment?

AARON GLANTZ: It’s incredible to have a sitting United States senator hold a hearing for the protection of one company, especially a company that we found was paying for preferential access to military bases, was surreptitiously engaging in recruitment activities at résumé workshops, was using the military seal in promotion and challenge coins without permission from the military, and was justifiably kicked off of every military base in the world by the Pentagon when it was put on probation so that these problems could be solved. And here you have Senator McCain and, I might add, the other Republicans on the committee sticking up for this company and indicating, by the way, that they expect that under a Trump administration the Pentagon and other government agencies will not take these kind of regulatory enforcement actions anymore.

AMY GOODMAN: Aaron Glantz, thanks so much for being with us, senior reporter at Reveal from The Center for Investigative Reporting, speaking to us from San Francisco. This is Democracy Now! Stay with us. 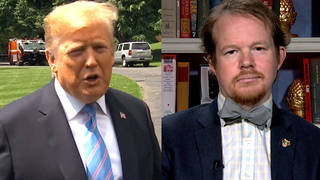