From Climate Change to Nuclear War, Noam Chomsky Warns of Literal Threats to Our Survival

On Monday night, Democracy Now! celebrated its 20th anniversary at the historic Riverside Church in New York City. Among those who addressed more than 2,000 attendants was world-renowned linguistic Noam Chomsky, who spoke about the two most dangerous threats the human species faces today: the possibility of nuclear war and the accelerating destruction of human-fueled climate change.

NOAM CHOMSKY: The U.S. isolation at Marrakech is symptomatic of broader developments that we should think about pretty carefully. They’re of considerable significance. U.S. isolation in the world is increasing in remarkable ways. Maybe the most striking is right in this hemisphere, what used to be called “our little region over here”—Henry Stimson, secretary of war under Roosevelt, “our little region over here,” where nobody bothers us. If anybody gets out of line, we punish them harshly; otherwise, they do what we say. That’s very far from true. During this century, Latin America, for the first time in 500 years, has freed itself from Western imperialism. Last century, that’s the United States. The International Monetary Fund, which is basically an agency of the U.S. Treasury, has been kicked out of the—of South America entirely. There are no U.S. military bases left. The international organizations, the—the hemispheric organizations are beginning to exclude the United States and Canada. In 2015, there was a summit coming up, and the United States might have been excluded completely from the hemisphere over the issue of Cuba. That was the crucial issue that the hemisphere—on which the hemisphere opposed U.S. policy, as does the world. That’s surely the reason why Obama made the gestures towards normalization, that were at least some step forward—and could be reversed under Trump. We don’t know.

On a much more far-reaching scale, something similar is happening in Asia. As you know, one of Obama’s major policies was the so-called pivot to Asia, which was actually a measure to confront China, transparently. One component of the pivot to Asia was the TPP, the Trans-Pacific Partnership, which excluded China, tried to bring in other Asia-Pacific countries. Well, that seems to be on its way to collapse, for pretty good reasons, I think. But at the same time, there’s another international trade agreement that is expanding and growing, namely, China’s—what they call the Regional Comprehensive Economic Partnership, which is now drawing in U.S. allies, from Peru to Australia to Japan. The U.S. will probably choose to stay out of it, just as the United States, virtually alone, has stayed away from China’s Asian Infrastructure Development Bank, a kind of counterpart to the World Bank, that the U.S. has opposed for many years, but has now been joined by practically all U.S. allies, Britain and others. That’s—at the same time, China is expanding to the West with the Shanghai Cooperation Organization, the China-based Silk Roads. The whole system is an integrated system of energy resource sharing and so on. It includes Siberia, with its rich resources. It includes India and Pakistan. Iran will soon join, it appears, and probably Turkey. This will extend all the way from China to Europe. The United States has asked for observer status, and it’s been rejected, not permitted. And one of the major commitments of the Shanghai Cooperation Organization, the whole of the Central Asian states, is that there can be no U.S. military bases in this entire region.

Another step toward isolation may soon take place if the president-elect carries through his promise to terminate the nuclear weapons—the nuclear deal with Iran. Other countries who are parties to the deal might well continue. They might even—Europe, mainly. That means ignoring U.S. sanctions. That will extend U.S. isolation, even from Europe. And in fact Europe might move, under these circumstances, towards backing off from the confrontation with Russia. Actually, Brexit may assist with this, because Britain was the voice of the United States in NATO, the harshest voice. Now it’s out, gives Europe some opportunities. There were choices in 1990, ’91, time of the collapse of the Soviet Union. Mikhail Gorbachev had a—what he called a vision of a common European home, an integrated, cooperative system of security, commerce, interchange, no military alliances from the Atlantic to the Pacific. The U.S. insisted on a different vision—namely, Soviet Union collapses, and NATO remains and, indeed, expands, right up to the borders of Russia now, where very serious threats are evident daily.

Well, all of this, these are significant developments. They’re related to the widely discussed matter of decline of American power. There are some conventional measures which, however, are misleading in quite interesting ways. I’ll just say a word about it, because there’s no time, but it’s something to seriously think about. By conventional measures, in 1945, the United States had reached the peak of global dominance—nothing like it in history. It had perhaps 50 percent of total world’s wealth. Other industrial countries were devastated or destroyed by the war, severely damaged. The U.S. economy had gained enormously from the war, and it was in—and the U.S., in general, had a position of dominance with no historical parallel. Well, that, of course, couldn’t last. Other industrial countries reconstructed. By around 1970, the world was described as tripolar: three major economic centers—a German-based Europe, a U.S.-based North America and the Northeast Asian area, at that time Japan-based, now China had moved in as a partner, conflict then partner. By now—by that time, U.S. share in global wealth was about 25 percent. And today it’s not far below that.

Well, all of this is highly misleading, because it fails to take into account a crucial factor, which is almost never discussed, though there’s some interesting work on it. That’s the question of ownership of the world economy. If you take a look at the corporate—the multinational corporations around the world, what do they own? Well, that turns out to be a pretty interesting matter. In virtually every—this increasingly during the period of neoliberal globalization of the last generation, corporate wealth is becoming a more realistic measure of global power than national wealth. Corporate wealth, of course, is nationally based, supported by taxpayers like us, but the ownership has nothing to do with us. Corporate ownership, if you look at that, it turns out that in virtually every economic sector—manufacturing, finance, services, retail and others—U.S. corporations are well in the lead in ownership of the global economy. And overall, their ownership is close to 50 percent of the total. That’s roughly the proportion of U.S. national wealth in 1945, which tells you something about the nature of the world in which we live. Of course, that’s not for the benefit of American citizens, but of those who own and manage these private—publicly supported and private, quasi-totalitarian systems. If you look at the military dimension, of course, the U.S. is supreme. Nobody is even close. No point talking about it. But it is possible that Europe might take a more independent role. It might move towards something like Gorbachev’s vision. That might lead to a relaxation of the rising and very dangerous tensions at the Russian border, which would be a very welcome development.

Well, there’s a lot more to say about the fears and hopes and prospects. The threats and dangers are very real. There are plenty of opportunities. And as we face them, again, particularly the younger people among you, we should never overlook the fact that the threats that we now face are the most severe that have ever arisen in human history. They are literal threats to survival: nuclear war, environmental catastrophe. These are very urgent concerns. They cannot be delayed. They became more urgent on November 8th, for the reasons you know and that I mentioned. They have to be faced directly, and soon, if the human experiment is not to prove to be a disastrous failure.

AMY GOODMAN: Patti Smith, performing “People Have the Power,” along with Michael Stipe of R.E.M., at Monday night’s celebration of Democracy Now!'s 20th anniversary at the historic Riverside Church here in New York. I'm Amy Goodman. This is Democracy Now!, democracynow.org, The War and Peace Report.

“Welcome to the Fourth Reich”: Legendary Actor Harry Belafonte on the Election of Donald Trump

NEXT“Welcome to the Fourth Reich”: Legendary Actor Harry Belafonte on the Election of Donald Trump 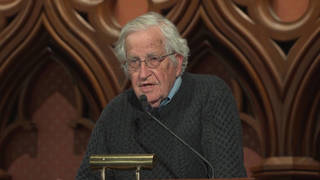