The legendary singer, poet and author Patti Smith performed two songs Monday night at Riverside Church celebrating Democracy Now!'s 20th anniversary. She opened with “Peaceable Kingdom,” a song she wrote for Rachel Corrie, the American activist killed by an Israeli bulldozer in Gaza in 2003. Smith dedicated the song to the young artists who died in Friday's fire in Oakland, as well as young journalists and activists who have lost their lives.

PATTI SMITH: This first song Tony and I wrote in memory of Rachel Corrie, who died on a peacekeeping mission in the Gaza Strip. Such a young girl. And we’d like to do this song for all the young people that we have lost globally—young reporters, activists, photographers, just all the—all the young people who have put themselves out in the front lines, who have—who want—as the young man said, all they want is change. All they want is peace. And we also would like to remember all the young people who lost their lives in the Oakland fire. And when you look at the pictures of them, all of them brimming with such hope, we need our young people. We pin our faith on them. They are going to make the most revolutionary changes in human history. They will continue to build peace movements, to protect our environment. And so we sing this little song for them.

Why must we hide all these feelings inside?
Lions and lambs shall abide

AMY GOODMAN: Patti Smith, performing Monday night with her daughter Jesse Paris Smith, and and Tony Shanahan at Riverside Church, celebrating Democracy Now!'s 20th anniversary. Tune in tomorrow to Democracy Now! when we air an historic conversation between Noam Chomsky and Harry Belafonte, never before together in conversation at a public event. And that's what we did with them last night. You can also watch the full two-and-a-half-hour event, the celebration of Democracy Now!, at democracynow.org. 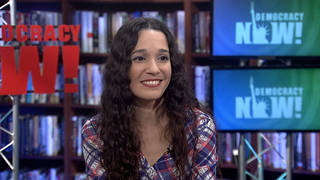