The Service Employees International Union faced criticism for endorsing Hillary Clinton in November 2015 even though many labor activists saw Senator Bernie Sanders as the candidate with a stronger record on labor issues. Sanders was an early backer of the Fight for $15 movement, while Clinton faced criticism for her time serving on the board of Wal-Mart. SEIU International President Mary Kay Henry says she did not make a mistake in endorsing Clinton so early in the campaign.

AMY GOODMAN: Finally, Mary Kay Henry, your union, SEIU, also faced criticism for endorsing Hillary Clinton in November 2015, even though many labor activists saw Bernie Sanders as the candidate with a stronger record on labor issues, an early backer, for example, of the Fight for 15 movement, while Clinton faced criticism for her time serving on the board of Wal-Mart. Do you think SEIU made a mistake in endorsing Clinton so early on in the campaign?

MARY KAY HENRY: No. Our home care and child care workers met with her the summer before. We knew that this was a leader who was going to advocate for women’s work finally becoming living wage work in the care sector. And she united with our vision that the 64 million people living and working more than full time in poverty deserved a shot at becoming the next American middle class.

AMY GOODMAN: But given the kind of, well, reflections people are making right now: Was the right candidate put forward? Especially as you talk about going forward, is there any kind of critical self-reflection that your union is doing?

MARY KAY HENRY: Well, we’re doing critical self-reflection on every aspect of our work in the two years leading up to the November election. The thing that we’re really digging into, Amy, is how do we project an economic agenda in this country where we are not divided by race and gender. And the key question that we’re digging into is that, because we think it’s what’s required for us to build the most powerful movement for change going forward and to make the gains that we need to in ’17 and ’18 to turn the tide in ’20 and begin to build the power we need to make the national change that every American deserves.

AMY GOODMAN: Mary Kay Henry, I want to thank you for being with us, international president of the Service Employees International Union, SEIU, which represents over 2 million workers in healthcare, public and property services.

This is Democracy Now! When we come back, an update on the recount with Green Party presidential candidate Dr. Jill Stein. Stay with us.

Green Party’s Jill Stein on Obstacles to Vote Recount: “This is Not What Democracy Looks Like”

NEXTGreen Party’s Jill Stein on Obstacles to Vote Recount: “This is Not What Democracy Looks Like” 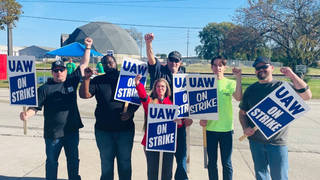