The Iowa caucus is different from a normal presidential primary: Party members gather and discuss their preferred candidates before ballots are cast. Caucus sites include homes, churches, gyms, halls, libraries, taverns and grain elevators. Turnout varies by community, with up to 1,000 people typically gathering in cities like Des Moines, while a few dozen or less may gather in more sparsely populated areas. At stake is just 1 percent of the delegates candidates needed to win their party’s nomination. Democrats and Republicans each have their own rules over how to caucus. To help us understand what will actually happen tonight, we are joined by Hugh Espey, executive director of Iowa Citizens for Community Improvement.

StoryFeb 01, 2016Bernie Sanders Says No to Fracked Oil Pipeline in Iowa, Will It Help Him in Today’s Caucus?

AMY GOODMAN: We’re going to switch right now to talk about caucus day. What exactly are the Iowa caucuses, the first nominating contest of the 2016 presidential race, voters heading to 1,100 schools, churches, libraries, other locations across Iowa tonight at 7:00 p.m. Iowa time? Turnout varies by community, with up to a thousand people typically gathering in cities like Des Moines, while a few dozen or less may gather in more sparsely populated areas. At stake is just 1 percent of the delegates candidates need to win their party’s nomination. Democrats and Republicans each have their own rules over how to caucus.

To help us understand what will actually happen tonight, we’re joined by Hugh Espey, the executive director of Iowa Citizens for Community Improvement.

Hi, Hugh. Can you lay out for us what is a caucus? How does it differ from a primary?

HUGH ESPEY: Well, a caucus is—you’ve got to spend about an hour or two going to a public meeting, as opposed to a primary, where you go during the day and cast your ballot over a 10- or 12-hour period. A caucus is—starts at 7:00 tonight, and it’s a community meeting, where you’re meeting with your friends and neighbors, and you’re picking a presidential nominee.

AMY GOODMAN: So, but explain, for people who are not—don’t come from Iowa. You go into a room, and you don’t just vote like you do in other states. Explain what you do.

HUGH ESPEY: OK, so there’s going to be 2,000 of those meetings across the state tonight. And the Republicans—this is a little bit different than the Democrats. They show up at a caucus site. It could be a school, could be a church basement, could be a library. And there’s—at the beginning, there’s going to be endorsements or speeches from various folks that support candidates. And then the people at the Republican caucuses then cast a secret ballot. And then the ballots are tallied, and the votes are apportioned accordingly.

So, that’s what it is. So, with the Democratic caucus, you’re probably going to spend about two hours. And the Republicans are going to probably be just a little bit less. After you do the nominations, then you deal with party platforms. But the exciting stuff tonight is the voting for the nominees.

AMY GOODMAN: Why did the Republicans and the Democrats evolve differently? Why is their process different in the same state?

HUGH ESPEY: You know, why are the Democrats different here in Iowa than the Republicans? Is that what you asked?

AMY GOODMAN: Their system. Why is their system different? You don’t have the same system where they have—where it’s private voting when it comes to Republicans, and you have a whole controversy over this Cruz flier that went out.

HUGH ESPEY: Yeah, I don’t know. I mean, it’s a good question. I’m not sure of the history of it, other than, you know, I guess, as Democrats—and I’m in a caucus, in a Democratic caucus. It’s just like we’re going to go out, and we’re going to tell our votes. And we’re going to, you know, stand up in front of our neighbors and say we support so-and-so. And then, so that’s what it’s going to be. The Democrats are just—make things just a little bit more complicated. You know?

HUGH ESPEY: Well, you know, that’s a good question. From my experience, most of the—the overwhelming majority of folks that are at the caucus have made up their minds. Now, again, you might be—at the Democratic caucus, you might be in a group that is not viable: You do not have 15 percent. And then you’ve got to figure: Am I going to go stand with another candidate, or am I going to abstain? But my experience has been that the folks that go are—know that they’re going to vote for a particular candidate. And turnout tonight is—you know, turnout is a big, big factor. I think the weather is going to be OK. There’s probably going to be over 120,000, 130,000 Republicans turn out, and I think there’s going to be a big turnout on the Democratic side, over 200,000. You know, a big turnout is going to help Sanders on the Democrats, and a big turnout will probably help Trump on the Republicans.

HUGH ESPEY: Well, you know, that’s a good question. Just because—you know, we practice grassroots politics out here. You know, it developed like that out of the party structure back, you know, over 40 years ago. Sometimes people say, “Well, you know, Iowa is a lot different than the rest of the country. It’s older, it’s whiter,” and all that sort of thing. And really, I think, here in Iowa, we take our politics pretty seriously. We want candidates to come out. We want to hear what they’ve got to say. We want them to hear what we’ve got to say. So we take the politics very seriously. And really, whether you’re in Des Moines or the middle of Detroit, people are people. You know, we want good schools. We want good jobs. We want to make sure that we’ve got retirement security. So the issues that are important here in Iowa are important across the country. So, it’s, you know—and we give our candidates a good look, and we put them through the paces. And we ask them and we tell them what we want, and we want to hear what they’ve got to say.

AMY GOODMAN: Finally, just for people who have never experienced this before, you’re in this big room, say you’re in the Democratic caucus, and someone goes over, say, to Martin O’Malley, and maybe he doesn’t get the 15 percent that he needs to—for that group to remain cohesive. What happens then? Someone in the room says you have to go to another—you have to go to another group?

HUGH ESPEY: Well, you know, so, after the first initial—with the Democratic caucus, after the first initial division up into the groups, then we’ll do the counting. And if you don’t have—let’s say it is Martin O’Malley. Say you don’t have 15 percent. And then people from the other preference groups, Sanders will approach you, and Clinton will approach you. And they’ll talk about, you know, what issues are important to you and what issues are important to their candidate. And so, they’ll try to convince people to side with them. And what I—you know, what I would say to a candidate or a person that’s standing in a preference group that’s not viable is that if you want to challenge the political establishment and if you want to change business-as-usual politics, then come stand with us, because I think people are fed up with business-as-usual politics and establishment politics. But so, there’s—

HUGH ESPEY: Well, you know—well, yeah. I mean, you know, it’s not like a basketball game where you’ve got 20 minutes per half or that sort of stuff. I mean, it could go on. It all depends. I think the—it’s going to be interesting. I think the Democratic caucus sites are going to last longer, because of the preference groups, and there’s going to be some questions about viability in some of those caucuses. So I would say—you know, it starts at 7:00. I think, you know, we’ll have a pretty good idea about 9:00 Central time.

AMY GOODMAN: Well, we’re going to have to leave it there. We do have a deadline. Thanks, Hugh Espey. I’m Amy Goodman. Thanks for joining us. 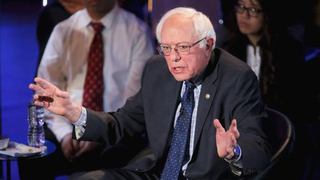