As the nation focuses on the Iowa caucus, we turn to a local issue that has received little attention. Iowa is facing a growing debate over the Bakken pipeline, a proposed crude oil pipeline that would run diagonally across the state. During his stops in Iowa, Bernie Sanders has used the pipeline to highlight differences with rival Hillary Clinton. We are joined from Des Moines by journalist and historian Jeff Biggers, a writer-in-residence and the founder of the Climate Narrative Project at the University of Iowa.

AMY GOODMAN: As the nation focuses on the Iowa caucus, we turn to an issue that has received little attention: a growing debate in Iowa over the Bakken pipeline, a proposed crude oil pipeline that would run diagonally across Iowa. Bernie Sanders recently ran a campaign ad featuring a pair of farmers talking about his position on the pipeline.

GEORGE NAYLOR: My family has lived on this farm for three generations. The Bakken pipeline would pump dirty crude oil across Iowa.

PATTI EDWARDSON: The fact that Bernie Sanders stands up against the pipeline is one of the reasons we support him.

PATTI EDWARDSON: Bernie knows that if we don’t act, we threaten the climate and the health of our children.

PATTI EDWARDSON: Bernie Sanders has the guts to just stand up for what he believes in.

AMY GOODMAN: While the Bernie Sanders ad doesn’t mention rival Hillary Clinton, on the campaign trail, the Vermont senator has used the pipeline to highlight differences between the two campaigns.

Joining us now from Des Moines is Jeff Biggers, a journalist and historian, writer-in-residence and founder of the Climate Narrative Project at the University of Iowa. He recently wrote a piece in Huffington Post titled “Iowa’s Climate Vote: Sanders Victory Will Put Climate Action Back in National Debate.”

There is a lot of activism on campus, Jeff. Talk about the Bakken pipeline, what it is, why people should care.

JEFF BIGGERS: Sure. You know, Amy, this is a pipeline that sort of has flown under the radar, I think, of a lot of the national media but really is a big issue here in Iowa, especially for farmers, for environmental activists and for climate activists. If it goes through, this will be a half-million barrels of oil that will be coming from the fracking fields of North Dakota completely across the state, going to the southern tier of the Midwest and the South. And it’s really become a bit of a litmus test for a lot of people with the candidates. I think what has encouraged a lot of people is that Bernie Sanders has been in the forefront and said he’s against the Bakken pipeline, and he’s actually taken a position. And that’s very much united farmers with environmentalists and students to side with Bernie Sanders as really the main climate action candidate this year.

AMY GOODMAN: Can you talk overall, give us a lay of the land of Iowa and the energy issues that are of great concern to Iowans?

JEFF BIGGERS: Sure. I think what’s unusual about Iowa—I first came here in 1984 to work in the campaign, and it’s a completely different issue. You have a completely different narrative going on right now and a different group of people who are working together. Thirty percent of the electricity in Iowa is produced by wind energy, and that has brought together a unique network of both farmers, of business people, of Republicans and Democrats, of students and climate activists, who really are in the forefront of the clean energy revolution. At the same time, they’re quite concerned about other issues. And I think this is where they’re looking at Bernie Sanders for leadership. He is the only candidate who has been in the forefront of taking on the fossil fuels lobby, of refusing to take money from fossil fuels lobbies, someone who’s against any kind of fossil fuel subsidies, and someone who has, you know, been in the forefront, long before President Obama, to say that we have to end coal extraction on public land.

JEFF BIGGERS: Right. I think it’s one of the incredible stories that’s often gone unreported, is the fact that we provide billions of dollars in subsidies, both tax breaks, tax credits, and actual gifts to the coal industry, the oil industry and the natural gas industry. If you take Illinois, for example, which is right next to Iowa, they receive millions of dollars, both from the state but also from the federal government. And this is something that Bernie Sanders has been in the forefront to say that we have to end these subsidies and transfer them over to clean energy development. And once again, pointing out that kind of issue, which is critical to any kind of a clean energy revolution, beyond a lot of the sort of well-meaning talk, is something that people are paying attention to, and it’s really mobilizing voters, I think especially the students and especially people in the rural areas.

CHUCK TODD: Isn’t it understandable why Iowans like these subsidies? Ethanol and biodiesels support more than 46,000 jobs. They’ve generated $2.5 billion in income for Iowa households. This is a state with unemployment under 4 percent. This is an important part of their economy.

SEN. TED CRUZ: Oh, absolutely. And listen, my view on energy, we should pursue all of the above. We ought to be pursuing every energy source.

CHUCK TODD: You’re going to be hurting their economy.

SEN. TED CRUZ: But with no mandates and subsidies. And you know what? The people who are attacking me on this are lobbyists and Democrats. And the reason they’re attacking—

CHUCK TODD: Governor Branstad? Is he a lobbyist or a Democrat?

SEN. TED CRUZ: No, his son is a lobbyist who makes hundreds of thousands of dollars lobbying on ethanol. So his family makes a ton of money. And the lobbyists very much want to keep Iowa focused on the ethanol mandate, because it keeps Iowa dependent on Washington. It means every year they’ve got to go back to Washington and maintain the mandate. The lobbyists get paid, the politicians get paid. I’m going to eliminate all the subsidies—no subsidies for oil and gas, no subsidies for anybody.

JEFF BIGGERS: You know, Cruz really stands alone as the only candidate, both on the Democrats and Republicans, who doesn’t support subsidies in the ethanol industry here in Iowa. I mean, let’s just be frank about it. Coal—I mean, excuse me, corn really is one of the defining features in this state, both in the economy and in the politics. And to come out on something like that is quite unique. Both the Democrats, like Sanders and Hillary Clinton, and O’Malley, of course, support the Renewable Fuel Standard. So I think what people have seen is that Cruz is making a major departure and major challenge to what has been very much the norm here in Iowa politics.

AMY GOODMAN: How important is climate to Iowans?

JEFF BIGGERS: Sure. You know, I was at Bernie Sanders’ rally on Saturday. It was the largest rally so far here in Iowa. Over 4,000 students showed up, and many more were actually left outside the Field House. Probably one of the biggest issues, clearly, that brought a lot of the students there was whether or not we’re going to have some action on climate change. The most organized sectors on campus among the students are the climate change groups, who are working and have a very good ground game to get their students to the caucuses. And so, I think these are students who really are facing the future, who realize it’s not enough just to sort of say that you believe in climate change, and you want to have some sort of action, it’s not enough to say you just want to put solar panels on a certain percentage of our households, but who want to see, you know, a really hard-nosed climate action plan. And that has really put Bernie Sanders in the forefront.

What we have done on the campus is to try to come up with a new climate narrative, a new way to talk about energy that can reach more people and in fact mobilize more people to do something about it. And I think this campaign in Iowa is very reflective of it. I think people often see Iowa as a flyover state. And why is—why do we have the caucus in Iowa? And, in fact, Iowa has been in the forefront of the clean energy movement across the state and could very much set the pace and set a very high bar for what candidates have to do when they talk about climate energy, climate change and clean energy.

AMY GOODMAN: Jeff Biggers, I want to thank you for being with us, journalist, historian, writer-in-residence, founder of the Climate Narrative Project at the University of Iowa, co-author of, most recently—we are talking to Jeff Biggers, but we’re going to switch right now to talk about caucus day. 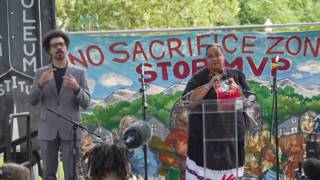