We talk about the legacy of Supreme Court Justice Antonin Scalia, the leading conservative voice on the Supreme Court for decades. “What’s not really being said as much as it should be is just how devastating his legacy is,” says Kimberlé Crenshaw, law professor at UCLA and Columbia University. “Justice Scalia was a person who effectively bludgeoned the life out of the living Constitution, the Constitution that gave us desegregation, that gave us women’s rights, that gave us environmental protections and political access.”

AMY GOODMAN: Well, let’s turn to Kimberlé Crenshaw, who is just joining us from Santa Ana, California, a professor of law at UCLA and Columbia University. The significance of the death of Justice Scalia?

KIMBERLÉ CRENSHAW: Well, Amy, I think this is probably the most significant thing to happen on the Supreme Court at least in the last three decades, since he was actually appointed. But I really think the challenge in the way we talk about it is being able to make it clear that while Justice Scalia was enormously influential—and some will even say he was an interesting person—what’s not really being said as much as it should be is just how devastating his legacy is.

What many people, I think, don’t really understand is how much their rights really turn on the interpretation of the Supreme Court. And in that context, Justice Scalia was a person who effectively bludgeoned the life out of the living Constitution, the Constitution that gave us desegregation, that gave us women’s rights, that gave us environmental protections and political access. So, when we think and talk about his influence, we have to think about it and talk about it in ways that give people a strong sense of how significant his judgments were and what this moment presents an opportunity to do, which, frankly, is to recover or reclaim some of what made the Constitution so powerful as a source for equal rights.

JUAN GONZÁLEZ: And, Kimberlé Crenshaw, we’ve asked the other guests, but I’d like to ask you also, your sense of what this means in terms of the possibility that we now face a potential gridlock in the Supreme Court, similar to the gridlock we have in Congress in terms of being able to get things done as a result of partisanship?

KIMBERLÉ CRENSHAW: Well, I agree with all the other guests that what we’re looking at, if Mitch McConnell is able to really stand firm on his claim that they will delay, delay, delay, there will be chaos. And within that chaos there will be some victories that might not have happened, as always, you know, is the case when you have the Supreme Court in the position of merely affirming some of the decisions below.

But I really think that the more fundamental opportunity that this presents is to really point out that the originalist claim is truly an ideological one that is more directed to particular outcomes rather than any coherent position. I mean, the founding fathers would be appalled by the claims of Mitch McConnell and many of the Republicans that the president doesn’t have a role to play in nominating a replacement and the Senate can just choose to delay because they don’t like the potential ideological direction that this nomination might represent. I think it’s important for the American people to know that the position of originalism isn’t itself an originalist position. And this is the opportunity to understand that and see what difference it makes in how we go about thinking about the Supreme Court.

AMY GOODMAN: I mean, isn’t it true that probably they understand that President Obama is going to nominate someone? I mean, in the last cases where there’s been the announcement of someone retiring, he has announced a name within 30 days. So, it’s pretty clear he’s going to move forward. But what this does, this kind of pressure does, is it pushes him to name a more conservative candidate for the Supreme Court. And I wanted to ask Linda Hirshman about one of the cases that’s coming up very soon, on March 3rd, the case of Whole Woman’s Health—on March 2nd, the case of Whole Woman’s Health in Texas. This is a case of abortion. Can you explain the significance of this case and what this Scalia-less court will do?

LINDA HIRSHMAN: So, the Whole Woman’s Health case involves a very onerous law in Texas which requires abortion clinics to have affiliations with hospitals that they simply can’t get and would mostly drive most of the abortion clinics out of Texas, creating an abortion-free zone in Texas. The lower court is the red or conservative Fifth Circuit. So they had said that the law was good. And there was some betting about whether the Supreme Court would break five to four, with Kennedy switching to the liberals to strike down the Texas law. So, the question now is, essentially, again on Kennedy. If Kennedy switches to the liberals, then the law will be struck down five to three. If Kennedy stays with the conservatives, then the court will, exactly as we’ve been—

AMY GOODMAN: We just lost Linda Hirshman; we lost the satellite in Phoenix, Arizona. She is the lawyer and historian, author of Sisters in Law: How Sandra Day O’Connor and Ruth Bader Ginsburg Went to the Supreme Court and Changed the World. Can you finish her thought, Scott Horton?

SCOTT HORTON: Well, the alternative is that there is an even split, four to four, and the ruling of the Fifth Circuit stands. And that accentuates, again, the likely evolution of a divided country by judicial districts. The more liberal, the blue courts of appeals will probably strike down efforts to undermine abortion rights, whereas the red courts of appeals will sustain them. 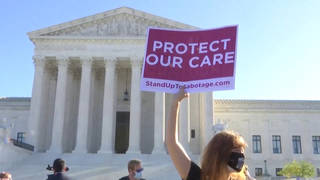 Amid SCOTUS Fight over ACA, Advocates Say Medicare for All Remains Best Way to Expand Healthcare