Part 2 of our conversation on Donald Trump with the father of fascism studies, Robert Paxton, professor emeritus of social science at Columbia University and author of several books, including “The Anatomy of Fascism.”

AMY GOODMAN: This is Democracy Now!, democracynow.org, The War and Peace Report. I’m Amy Goodman. “Fascism: Could it happen here?” That’s a question increasingly being raised as Republican presidential front-runner Donald Trump continues his bid for the White House. Oh, people like former Labor Secretary Robert Reich, actor George Clooney, the comedian Louis C.K. and Anne Frank’s stepsister Eva Schloss have said, yes, Trump is a fascist. We’re joined now by the father of fascism studies, Robert Paxton, professor emeritus of social science at Columbia University, among his books, The Anatomy of Fascism. His recent piece is headlined “Is Fascism Back?”

Professor Paxton, thanks for staying with us for Part 2 of this conversation. Have you been surprised by the rise and the popularity of Donald Trump?

ROBERT PAXTON: Totally surprised. Not so very long ago, Trump was a guaranteed laugh line. He was considered a buffoon. All you had to do was to show the hair and call him “The Donald,” and everyone kind of snickered. And suddenly he’s this—he’s this immense power. He’s touched the nerve with his style, which has fascist overtones, encouraging violence, attacking the internal enemy and so forth, saying that the system is rotten and it needs an outsider to fix it, which is a fascist kind of appeal—make Germany great, make America great. Suddenly he’s touched a nerve, and for millions of people he is suddenly seen taken more than seriously. And that’s a strange flip. That’s a strange transformation.

AMY GOODMAN: What is this nerve that he’s tapped?

ROBERT PAXTON: Well, I think people are driven absolutely wild, people who are not doing well in this economy. The recovery is incomplete, it’s partial. And there’s many people who are doing extremely well or fairly well, and then there are a group of people who can’t get jobs because they’re not sufficiently educated in technology, whose wages are stagnant, and they’re driven wild by this disparity. So—

AMY GOODMAN: I mean, talking about disparity, you have—what did the study show? Something like 63 of the world’s richest people have more wealth than three-and-a-half billion people. And 42 of them are right here in the United States.

ROBERT PAXTON: Yes, and it’s ironic that Trump is one of them, and somehow he’s seen as the outsider who will fix it. But I think there’s this bitterness that suddenly, with his—with his aggressive style, which recalls Mussolini and so forth, he’s suddenly seen to them as some kind of savior. And I think that transformation—a year ago, they would have laughed at him. Now, suddenly, he’s seen as a savior. I think that’s absolutely astonishing and, I guess, a tribute to the power of social media and suggestion and crowd behavior. It’s very strange.

AMY GOODMAN: And do you think he’s pulling other Republicans with him?

ROBERT PAXTON: I think if other Republicans believe that he’s a liability and he’ll cause them to lose the election, they’ll fight him all they can. But if they decide that he’s doing so well in mobilizing these angry people that he indeed could win the election, then they’ll all come in behind him. And then, I think, they’ll support him massively.

AMY GOODMAN: The Mussolini quote, when it was pointed out to him—he retweeted it.

AMY GOODMAN: But it did say Il Duce right before it, so it wasn’t like this was a total shock. And when he was told, “The quote you have retweeted is Mussolini,” he did not back down, said, “Well, it’s a good quote.”

ROBERT PAXTON: Yes. I think he’s quite tolerant of these kinds of political oratory and appeal. I think he—he’s not offended by them.

AMY GOODMAN: So, what are the trends that most concern you in the United States right now and the ones that don’t, as the father of fascist studies, fascism studies, that you see makes this different?

ROBERT PAXTON: Well, this is one of the troubles with using the term “fascism,” is that blinds us to a lot of really bad things that are happening, such as the power of money in politics, the decay of community feeling, the decay of the feeling that we owe something to the community and to our neighbors. These are other kinds of problems that calling Trump a fascist doesn’t help us understand. It’s one of the objections I have to using the term. The way the political system has slipped out of the hands of the people who used to decide things and opening the gates to outsiders, which sounds like a democratic thing, but the—when the outsiders use crowd behavior and use the media with such skill, and then it’s—then you come up with dangerous people

AMY GOODMAN: Let’s talk about these rallies and what they represent.

ROBERT PAXTON: Well, the rallies—it’s in the rallies that he’s established this rapport with a lot of angry people who felt that nobody else was speaking for them. It’s an incredible achievement. He’s very good at sensing the deep feelings of a crowd and playing them. This is another thing that sounds like Mussolini. Mussolini used to stand on the balcony and have exchanges with the thousands of people assembled in the streets below, and they would chant back and forth. He has brought those people into political activity. He’s given them a focus. And he’s installed himself as their spokesperson. And that’s an astonishing achievement.

AMY GOODMAN: What about the role of the media?

ROBERT PAXTON: Well, the media nowadays make everything happen in an instant. And there’s no—it’s very difficult to arrive at mature judgment when things are happening on a six-hour news cycle.

AMY GOODMAN: There was an amazing conversation today on CNN between Chris Cuomo, the host of the morning show, and Alisyn Camerota, his co-host. And she went through all of the attacks on Latino, black protesters at Trump rallies—you know, the choking, the sucker-punching, the violence. And Chris Cuomo says, “Well, Trump’s going to say that no one’s really been hurt.” So Alisyn Camerota responds, “How is that not being hurt, when you’re shoved to the ground and kicked?” Chris Cuomo says, “I don’t know how badly they were hurt.” And Alisyn Camerota says, “I mean, the guy—they’re not in intensive care.” And then another commentator, Jackie Kucinich, says, “On a stretcher shouldn’t be a metric.” I mean, how this is escalating right now.

ROBERT PAXTON: Yes, but one of the qualities of fascism was that they admired violence. They thought that violence had an esthetic quality, provided it was violence directed toward the revival of a damaged country or damaged state. And a little of that redemptive violence is showing up in Trump’s rhetoric, because he’s suggesting to the crowd and encouraging them to think that it’s good to rough up people they disagree with. And this is an ominous development.

AMY GOODMAN: Economic deprivation today in this country and in Nazi Germany, in the Weimar Republic, do you see parallels?

ROBERT PAXTON: Well, economic deprivation was universal in Germany, in Weimar Germany. First of all, there was the massive inflation of 1923. If you had savings, they disappeared. The whole middle class went through the trap door. And then everybody was unemployed in 1930. Every—it was total deprivation. We have relative deprivation. We have the richest economy on Earth, with a group of people who feel they’ve been left behind, while others, perhaps including black people, are given unfair advantages.

AMY GOODMAN: You conclude your article by saying the term “fascist” should be left to groups that explicitly employ Nazi symbols and use physical violence, like Aryan Nations here in the U.S. or Golden Dawn in Greece.

ROBERT PAXTON: Yes, well, I’m a little leery of using the term “fascism” too loosely. I think Trump adopts fascist themes. He revels in fascist techniques. He’s good at manipulating a crowd. There are, at the same time, profound differences. The original fascisms wanted to solve the problems of Germany and Italy by creating a strong state, and they wanted to—they wanted to subordinate the conflicting interests of individuals to the overarching interest of the community, which is the opposite of what’s going on now in America. There’s the—there’s individualism to the extreme, and people are unwilling to accept any kind of community discipline—environmental legislation, action on global warming, protection of workers—all of this, for people who vote for Trump or, indeed, largely, any of the Republican candidates want to throw out all of these community obligations. That’s the opposite of fascism.

AMY GOODMAN: Has your feelings about Trump’s danger evolved? Like at the beginning, were you saying to people, “This is absolutely ridiculous”? I mean, Robert Reich calling Donald Trump “the American fascist.” And have—as you’ve seen his popularity grow, have you changed your views?

ROBERT PAXTON: Well, early on, I thought it was temporary. I thought the bubble was going to burst. There would be some outrageous comment, that he might even attack the pope, for example. Turns out not to have had the slightest effect. What he said—

AMY GOODMAN: He did attack the pope.

ROBERT PAXTON: He did attack the pope. The content of what he says is utterly irrelevant. It’s the style. It’s the sort of image he projects of being an outsider, a nonpolitician, who’s going to use force and fix it for us. And that seems to be unshakable. And that’s something new. That’s a surprise.

AMY GOODMAN: Well, Professor Paxton, I want to thank you fro being with us. Professor Robert Paxton is a professor emeritus of social science at Columbia University specializing in modern European history, with particular focus on the rise and spread of fascism. Among his books, The Anatomy of Fascism. His latest piece, “Is Fascism Back?”

This is Democracy Now! I’m Amy Goodman. Thanks for joining us. 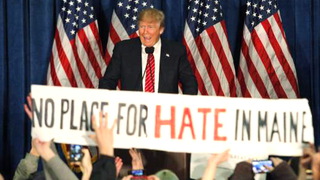