“Fascism: Could it happen here?” That’s a question increasingly being raised as Republican presidential front-runner Donald Trump continues his bid for the White House. People as varied as actor George Clooney, comedian Louis C.K. and Anne Frank’s stepsister Eva Schloss have suggested Trump is a fascist. Earlier this month, Mexican President Enrique Peña Nieto criticized Trump by invoking the fascist dictators Adolf Hitler and Benito Mussolini. Trump has retweeted quotes by Mussolini. Is Donald Trump really a fascist? We put the question to the father of fascism studies, Robert Paxton, professor emeritus of social science at Columbia University and author of several books, including “The Anatomy of Fascism.”

PRESIDENT ENRIQUE PEÑA NIETO: [translated] And there have been episodes in human history, unfortunately, where these expressions of this strident rhetoric have only led to very ominous situations in the history of humanity. That’s how Mussolini got in. That’s how Hitler got in. They took advantage of a situation, a problem perhaps, which humanity was going through at the time, after an economic crisis. And I think what they put forward ended up, at what we know today from history, in global conflagration.

AMY GOODMAN: Republican front-runner Donald Trump has retweeted quotes by Italian fascist leader Benito Mussolini. He was asked about it on Meet the Press.

CHUCK TODD: That’s a famous Mussolini quote. You retweeted it. Do you like the quote? Did you know it was Mussolini?

AMY GOODMAN: Donald Trump has waffled on accepting support from white supremacist groups like the KKK, and he’s even encouraged hand salutes at his rallies that some say are reminiscent of Adolf Hitler. However, Donald Trump, is he a fascist? Could fascism ever come to America’s shores?

For more, we’re joined by the father of fascism studies, Robert Paxton, professor emeritus of social science at Columbia University. Paxton is the author of several books, including The Anatomy of Fascism. His recent piece is headlined “Is Fascism Back?” and a while ago wrote a piece on “The Five Stages of Fascism.”

ROBERT PAXTON: Thank you very much for inviting me.

AMY GOODMAN: So, what do you think of Donald Trump? Is he a fascist?

ROBERT PAXTON: Well, I think that Donald Trump shows a rather alarming willingness to use fascist themes and fascist styles, which—and the response this gets, the positive response, is alarming.

AMY GOODMAN: What is fascism?

ROBERT PAXTON: Well, fascism is a mass nationalist movement intended to restore a country that’s been damaged or is in decline, by expansion, by violent attacks on enemies, internal as well as external enemies, and measures of authority, the replacement of democracy by an authoritarian dictatorship.

AMY GOODMAN: Explain what happened in Nazi Germany and with Adolf Hitler. I mean, he didn’t start by killing 6 million Jews; there was a buildup. Talk about how it started—and in Italy, and you particularly look at France.

ROBERT PAXTON: Well, in the case of Hitler, it took him 13 years. It started in Munich as a minor fringe movement of disgruntled war veterans, and it percolated along.

AMY GOODMAN: That was from World War I.

ROBERT PAXTON: From World War I. This is 1920, early 1920s. In the election of 1924, he did very poorly, for a marginal party. Then you have the Depression in 1929 and 1930. And there are two things: There’s this huge economic crisis with millions and millions, tens of millions, unemployed, and there’s also a governmental deadlock. You cannot get any legislation passed without bringing in the social democrats. And the middle—center and right absolutely won’t work with social democrats, although they’re really quite moderate.

ROBERT PAXTON: I’m describing—I’m describing the German—the German Weimar Republic really ceased to function as a republic in 1930, because nothing could be passed, and the president acted under Article 48 of the Constitution, which gave him powers in an emergency to rule by decree. So, between 1930 and 1933, President von Hindenburg ruled by decree. And the political elites are desperate to get out of that situation. And here’s Hitler, who has more votes by this time than anybody else. He’s up to 37 percent. He never gets a majority, but he’s up to 37 percent. And they want to bring that into their tent and get a solid mass backing. And so they co-opt Hitler. They bring him in.

The other party that’s growing is the Communist Party. And that’s what’s very different from today. There are two parties that are growing in 1932: the Communist Party and the Nazi Party. And if you don’t bring in the Nazi Party, then maybe it’s the Communists who are going to take over. There’s that dynamic of social panic. They bring Hitler into the tent. And once he’s there, he doesn’t have full power when he’s chancellor. He doesn’t even have all the ministries. But he then—then he takes over full power, and nobody is willing to fight him, because that would mean helping the Communists.

AMY GOODMAN: And then what happens.

ROBERT PAXTON: Then he becomes a dictator. He gets a four-year—he gets the Parliament to pass a four-year Enabling Act. It allows him to govern without consulting Parliament, in '33 and ’37. And he uses that to build an unbeatable machine. He doesn't bother to get it renewed. He gets it renewed, but it’s meaningless by that time. He does what he wants. And he has these huge rallies. He’s enormously successful in restoring the economy and in bringing German power back and dismantling the Versailles Treaty. And he has these delirious mass rallies. And no one will dare to try to stop him, because it’s either him or the Communists.

AMY GOODMAN: So, Eva Schloss, the half-sister of Anne Frank—Otto Frank, her father, remarried after his family was killed in the Holocaust—Eva Schloss was just quoted as saying, in Newsweek, if Donald Trump becomes the next president of the [U.S.] it would be a complete disaster. I think he is acting like another Hitler by inciting racism.” She said, “I remember how upset the world was when the Berlin Wall was erected in 1961 and now [everybody] is building walls again to keep people out. It’s absurd.”

ROBERT PAXTON: Well, we don’t know what Donald Trump would do if he were elected president. He’s a thoroughly self-centered and aggressive personality. The danger, it seems to me, is that in a deadlock between Trump and the Congress or Trump and the courts, he would indeed take some kind of nonconstitutional action, and people would be afraid to say no.

AMY GOODMAN: You talk, Professor Paxton, about the five stages of fascism.

ROBERT PAXTON: Well, fascism confuses a lot of people, because at the very beginning, when it was a handful of disgruntled veterans, it sounded quite radical. But when it’s in power, it allies with banks, industrialists, the army, churches and so forth. And so it changes. As it comes close to power and it makes the bid for power, there’s an opportunist adjustment, whereby it gets along with the previously hated conservatives. So, you have to look at each stage somewhat separately. But in general, I’m very leery of the use of the term too casually. And I do see great differences between Trump and fascism.

AMY GOODMAN: Well, let me ask you about the violence at the Trump rallies.

AMY GOODMAN: You’ve got March 9th, a black protester is sucker-punched; and then, February 29th, a photographer slammed on the ground; November 21st, a black protester punched, kicked, briefly choked; October 23rd, a Latino protester kicked; October 14th, immigration activists are shoved, they’re spit on. Donald Trump talks about paying the legal fees of those who are brought up on charges—most recently, the man who sucker-punched the African-American protester and then, afterwards, said into a camera of Inside Edition, “Next time I would kill him.” And Donald Trump has offered to pay his legal fees?

ROBERT PAXTON: Well, Donald Trump—Donald Trump’s pandering to the hatreds and violent instincts of some of these crowds is very alarming. But I think in a longer perspective of we’ve had greater acts of violence than this during the civil rights campaign. People were shot, dogs were put on them, fire hoses were put on them, people were killed in the civil rights campaigns. And this is—this is relatively small potatoes. I think it reveals a man of violent temperament and a dangerous person, but I think it’s still on a relatively small scale. Mussolini and Hitler fought in the streets with the Socialists and the Communists. And they were dead. There were a few dead in Germany. There were actually more dead in Italy, when Mussolini was sort of conquering the streets with his Blackshirts. That’s real political violence. If Donald Trump puts his followers in colored shirts and they begin to fight in the streets, then you’ve got fascism.

AMY GOODMAN: Well, in this country, a deindustrialized America, the increasing, growing disparity between rich and poor, do you think a kind of foundation is being laid that he is playing on?

ROBERT PAXTON: Well, I think there is a public that he’s speaking to. In Italy after the First World War, there was a global depression. Everybody was worse off. In Germany in 1933, everybody was worse off. Now, we’ve got this strange dichotomy of a few people doing incredibly well, amassing pharaonic wealth, and most people in the middle doing somewhat better, and a group of people doing worse, with stagnant wages, with job opportunities that are limited to people with technical skills that poorly educated people don’t have. So we’ve got a group of people who see the others getting ahead by leaps and bounds, and sometimes they think that black people are getting fair advantages to get ahead, and they’re slipping behind. And so, this is a very angry crowd of people.

AMY GOODMAN: Do you think Donald Trump is a danger to America or represents a danger that’s already here?

ROBERT PAXTON: I think that his violent and aggressive temperament installed in the powers of the president of the United States is unpredictable and frightening.

AMY GOODMAN: I want to thank you very much for joining us, Professor Robert Paxton, professor emeritus of social science at Columbia University. His books include The Anatomy of Fascism. His recent piece is headlined “Is Fascism Back?”

And that does it for our broadcast. Democracy Now! has three job openings: broadcast engineer, director of finance and operations and director of development. Go to democracynow.org for more information. 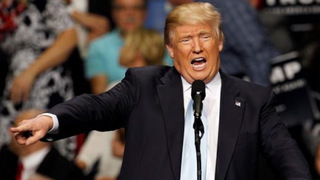