Chomsky: Hillary Clinton Fears BDS Because It Counters Decades of US Support for Israeli Aggression

We speak with world-renowned political dissident Noam Chomsky about where the Democratic presidential candidates stand on the issue of Israel and the Boycott, Divestment and Sanctions movement, or BDS. “Boycott and sanctions make perfectly good sense when these tactics are properly applied, as they often are,” Chomsky says. “You can understand why Hillary Clinton is frightened of them. They might undermine the policy of her husband and his predecessors, and Obama, as well, to support Israeli violence and aggression.”

AMY GOODMAN: Noam, I want to turn back to the Democratic debate that was held here in Brooklyn. Bernie Sanders and Hillary Clinton sparred over the issue of Israel and Palestine. This exchange begins with a question from the moderator, Wolf Blitzer.

WOLF BLITZER: Secretary Clinton, do you agree with Senator Sanders that Israel overreacts to Palestinian attacks, and that in order for there to be peace between Israel and the Palestinians, Israel must, quote, “end its disproportionate responses”?

HILLARY CLINTON: I can tell you right now, because I have been there with Israeli officials going back more than 25 years, that they do not seek this kind of attacks. They do not invite rockets raining down on their towns and villages. … So I don’t know how you run a country when you are under constant threat, terrorist attack, rockets coming at you. You have a right to defend yourself. … And let me say this: If Yasser Arafat had agreed with my husband at Camp David in the late 1990s to the offer that Prime Minister Barak put on the table, we would have had a Palestinian state—

SEN. BERNIE SANDERS: I don’t think that anybody would suggest that Israel invites or welcomes missiles flying into their country. That is not the issue. And you evaded the answer. You evaded the question. The question is, not does Israel have a right to respond, not does Israel have a right to go after terrorists and destroy terrorism. That’s not the debate. Was their response disproportionate? I believe that it was. You have not answered that. … There comes a time when, if we pursue justice and peace, we are going to have to say that Netanyahu is not right all of the time.

AMY GOODMAN: That’s Bernie Sanders and Hillary Clinton on the issue of Israel and Palestine. Noam Chomsky, your response?

NOAM CHOMSKY: Well, it’s interesting and helpful that Sanders said that. By world standards, it’s way off to the extreme—I don’t know what dimension to call it, the nationalist right. The talk—the question of Israel’s disproportionate response is a little bit like the question of expansion of the settlements, the only one you’re allowed to discuss here. These are not the questions. The question is: Why is there a response at all? Why are there any settlements? The settlements are totally illegal. That’s been determined by the highest authorities: Security Council, International Court of Justice, Red Cross, ministers of the Geneva Conventions. There’s simply no question about their legality. At one point, the U.S. also agreed that they were illegal. Now they just say it’s an obstacle to peace. So—and the same is true of the disproportionate response.

So let’s take at these alleged missiles. First of all, there aren’t any missiles, but the so-called rocket attacks that are coming. Why are they coming? You look at the record. I’ve gone through it in detail in print, if you want to look at it; it’s in the book that you just mentioned, in fact. Consistently, what has happened is this: A ceasefire agreement is reached between Hamas and Israel. The terms are always about the same—end the siege, no more military action, beginning of commercial relations and so on. Israel complete—Hamas lives up to the terms. Israel totally disregards them—maintains the siege, a brutal, harsh siege, continues with military actions. Finally, some escalation in Israeli attacks leads to a Hamas response. At that point, we get another episode of what Israel politely calls “mowing the lawn,” each one worse than the lasts. Then we get a question here: Is Israel’s response disproportionate? I mean, if it weren’t so grotesque, it would be comical. The question is: Why is Israel maintaining a harsh, brutal, vicious siege, which is destroying Gaza, consistently violating the ceasefire agreements that it reaches, and then, when there’s some response to its escalating crimes, carries out a monstrous attack, while its protector debates whether the response is disproportionate?

The real problem is right here. As long as the United States continues to support all of this, it’s going to continue. And incidentally, U.S. support for Israeli actions is not only—is not only supporting violations of international law, it is explicitly violating U.S. law. Take a look at U.S. law, so-called Leahy law. It flatly bars military—dispatch of military equipment to any military group that is involved in consistent human rights violations. There’s simply no doubt that the Israeli army is involved in extremely serious human rights violations consistently. Now, that’s why organizations like Amnesty International and, if I recall correctly, Human Rights Watch have called for a ban on sending weapons to Israel—in accord with U.S. law, incidentally. So, yes, if the United States lived up to U.S. law, if it stopped providing the decisive support for the settlement activities it claims it’s opposed to, for other repression and violence, then there wouldn’t be any need for any response, certainly not a disproportionate response.

As to Clinton’s famous offer, alas, at Camp David, Mrs. Clinton may remember that Clinton himself recognized that it was inadequate. A couple months later, in December, he—after Camp David, he issued what he called his parameters for a settlement. Both sides accepted them. Both sides had reservations. Israel had extremely severe reservations. They were to negotiate these in Taba in January 2001. Negotiations took place. They were called off by Israel at a point where the negotiators, at least, say they were coming pretty close to an agreement, an agreement which was much less extreme on the pro-Israel side than the Clinton proposals. Well, Prime Minister Barak himself has said, informally, that—maybe, I presume, correctly—that the Israeli negotiators at Taba had no authority to negotiate anything, so it was kind of a show.

AMY GOODMAN: Noam, I wanted to go back to the candidates on this issue, particularly what Hillary Clinton had to say to AIPAC earlier this year, when she criticized the BDS movement, the Boycott, Divestment, Sanctions movement.

HILLARY CLINTON: As I wrote last year in a letter to the heads of major American Jewish organizations, we have to be united in fighting back against BDS. Many of its proponents have demonized Israeli scientists and intellectuals, even students. To all the college students who may have encountered this on campus, I hope you stay strong. Keep speaking out. Don’t let anyone silence you, bully you or try to shut down debate, especially in places of learning like colleges and universities. Anti-Semitism has no place in any civilized society—not in America, not in Europe, not anywhere.

NOAM CHOMSKY: Well, some of what she said is quite accurate. I’m strongly—I’m very happy that she has agreed that one should not shut down debate on this issue in campus. She’s about 40 years too late. Over the past decades, I’ve had plenty of experience. The few other people who talk about this issue have similar experience of trying to give talks on the topic on university campuses, with police protection, with meetings broken up violently, with airport-style security at entrances. Even at my own university, until not long ago, not only did there have to be a police presence, but the police insisted on walking me back to my car, just because of the threat of violence. So, that’s been going on for decades. And it’s very nice that Mrs. Clinton has finally decided, yes, maybe it would be nice to have free and open debate on campus—as there is now for the first time. And it’s a good thing that there is, that there is now a possibility of free and open debate on campuses. You can find, if you search, marginal cases of excesses. Reminds me of back around 1970, when people like Seymour Martin Lipset were desperately searching through local black newspapers to see if they could find an anti-Semitic comment somewhere, so they could then condemn the black movements as anti-Semitic. Yeah, I can understand the game. But the fact of the matter is, now there is, for the first time, free, open, extensive discussion and debate on campus—not perfect, by any means, on—you can find things on all sides, but radically different from before.

As to the tactics of boycott and divestment, they make perfect sense. When the Presbyterian Church imposes a boycott and divestment on anything connected to the Israeli-occupied territories, including U.S. multinationals—that’s critical—which are involved in the territories, that’s a very positive step forward, not only supportive of international law, supportive of genuine moral principles, a significant act, a nonviolent act, to oppose brutality, violence and repression. We could, I think, go much farther. As I said, we should be calling for implementation of U.S. law, along joining Amnesty International and others to call for an end to U.S. military aid to Israel. Boycott and sanctions make perfectly good sense when these tactics are properly applied, as they often are.

You can understand why Hillary Clinton is frightened of them. They might undermine the policy of her husband and his predecessors, and Obama, as well, to support Israeli violence and aggression, to protect Israeli nuclear weapons from scrutiny so we can’t have a nuclear weapons-free zone in the region, to veto Security Council resolutions, which literally support official U.S. policy, as Obama did in February 2011. Yeah, and the nonviolent actions to undermine this, legitimate actions, of course frighten Hillary Clinton enormously. And then you hear tirades like this.

But one part was correct. Namely, it’s a good idea to protect the right of free discussion and debate on campus. It’s a shame that that never occurred to her for the past 40 years, when it was impossible to have debate and discussion without violence, police protection and so on.

AMY GOODMAN: Noam, I want to break and then ask you who you’re supporting in this presidential race. Noam Chomsky, world-renowned political dissident, linguist, author, institute professor emeritus at Massachusetts Institute of Technology. His latest book, Who Rules the World? Stay with us. 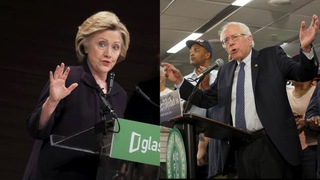