Keep Oil in the Soil: Bill McKibben on Being Named by Sanders to DNC Platform Committee

AMY GOODMAN: Very quickly, before we end, Bill McKibben, I want to ask you about another issue. You were just named by Senator Sanders to serve on the platform committee at this year’s Democratic National Convention, along with scholar Cornel West; Native American activist Deborah Parker; Minnesota Congressmember Keith Ellison, who chairs the Congressional Progressive Caucus; and the Palestinian rights activist and scholar Jim Zogby, who founded the American Arab Institute. Can you talk about what you want to see in the Democratic platform, what you’re going to be pushing for?

BILL McKIBBEN: Sure. I think my job here—I mean, I think, look, this is not my normal—you know, I’m more likely to be found outside protesting than inside, but Bernie has earned the right to ask people, I think, at this point, to help him. And so, when he asked, I said I would. And what I’ll do is try to focus on the things that he’s been talking about with climate and energy throughout the campaign, trying to close down as much as we can of this expansion of the fracking industry, trying to keep fossil fuel in the ground on public lands, the Keep It in the Ground Act that he co-sponsored, that Senator Merkley of Oregon wrote—things like that, that have been part of the reason that people have been rallying to his standard.

AMY GOODMAN: Would you call for a moratorium on fracking?

BILL McKIBBEN: Well, I don’t—I mean, I don’t know what the language will be or even quite what that would mean, but I think at this point the key is at least to keep it from growing any faster than it can. I wrote a long piece in the cover of The Nation about a month ago just explaining that what we’ve learned about the science over the last two or three years makes it extraordinarily clear that it’s not only desperately dangerous for people in their local communities, but also for the planet, because the leakage of that methane into the atmosphere, that CH4, is darn near as dangerous as what we’re doing with carbon dioxide.

AMY GOODMAN: Finally, how would it translate into a platform to keep the oil in the soil? What exactly would you call for?

BILL McKIBBEN: Well, I think that the best sort of example of that we have so far is this Keep It in the Ground Act of 2015 that Senator Merkley introduced. In fact, I was up on the Hill the day that he introduced it. And Senator Sanders was there, as well as the other—one of the other co-sponsors. That’s a really powerful and interesting piece of legislation.

AMY GOODMAN: Well, I want to thank you for joining us, Bill McKibben, co-founder of 350.org, scholar-in-residence at Middlebury College. We’ll link to your piece in The Guardian headlined “Let’s give up the climate change charade: Exxon won’t change its stripes.” Author of many books, including Oil and Honey: The Education of an Unlikely Activist. He has been named by Senator Sanders to the platform committee of the Democratic National Convention that will take place in Philadelphia in July. And, of course, Democracy Now! will be there throughout. Thank you also to Anna Kalinsky, granddaughter of James Black, who worked for decades as a scientist at Exxon. He alerted the company executives to the original scientific findings of climate change in the 1970s. And she, Anna, questioned the CEO of Exxon yesterday at the Exxon shareholders meeting in Dallas, where she’s speaking to us today. This is Democracy Now! We’ll be back in a minute. 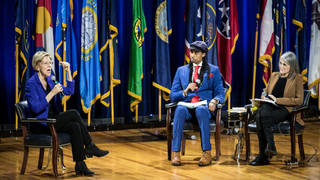