Over the years, Juan González has used his column in the New York Daily News to break major corruption scandals and cover-ups, including the attempt to conceal the health impacts of the toxic dust released on 9/11. Tom Robbins, one of Juan González’s colleagues at the Daily News and a recent Pulitzer Prize finalist for his coverage of violence in New York’s prisons, joins us to reflect on González’s remarkable career as an organizer who led newspaper workers on a successful strike and published “one scoop after another.” Robbins is now investigative journalist in residence at the CUNY Graduate School of Journalism. His piece “Juan González: Iron Man of the News Room” has just been published.

AMY GOODMAN: This is Democracy Now!, democracynow.org, The War and Peace Report. We’re broadcasting from Atlanta, Georgia, and New York City. I’m Amy Goodman, with Juan González in New York. On Monday night, New York Governor Andrew Cuomo, New York Senator Chuck Schumer, New York Mayor Bill de Blasio, Congressmember José Serrano, journalist Geraldo Rivera and others celebrated Juan González’s 29-year career at the New York Daily News during an event Monday night at the Fraunces Tavern. We are joined by longtime New York journalist Tom Robbins, who is a recent Pulitzer finalist for his coverage of violence in New York’s prisons, Tom a longtime columnist and staff writer at The Village Voice and the New York Daily News, where he worked with Juan González for over a decade. He recently wrote an article headlined “Juan González: Iron Man of the News Room.” Tom is now an investigative journalist in residence at the CUNY Journalism School.

So, Tom, you were there. What an amazing event! I’m so sorry I couldn’t be with you all. But, Juan, what a scene in New York, as I was getting live tweets of the photographs of, first, the governor, then the mayor—God forbid they should be in the same room at the same time, but it was you who brought them into the same room, even if they weren’t there at the same time. Tom, I’m not going to ask Juan, because he’s too modest, but talk about Juan’s significance as a journalist.

TOM ROBBINS: You know, Andrew Cuomo was singing Juan’s praises the other night. And a lot of us in the room who have watched Andrew Cuomo squirming in the last few weeks, given his own problems, you know, were sort of thinking, you know, he’s sort of escaping from the questions that reporters would otherwise be asking him. But, in fact, he was, I think, speaking from the heart about his true admiration for reporters like Juan, who get below the surface. Juan’s ability to both dig deep and ask tough questions has never gotten in the way of his relationships with people, which is an amazing thing. And I—that’s one of the reasons you had the crowded room at Fraunces Tavern. I think it’s another reason why you had the Deadline Club event, that we just witnessed, with—surrounded by adoring fans. Juan has an ability to both tell the truth and keep people liking him, which is sometimes a tough thing to do.

AMY GOODMAN: And the years of coverage, I mean, the kind of stories that Juan has broken?

TOM ROBBINS: You know, when—I got to the News about six months after Juan did. And me and Jack Newfield came together from The Village Voice. And the way Juan just described himself to the Deadline Club, in terms of like him being like kind of like odd man out, in a way, was really true. Juan was, you know, clearly, not only the only key Latino reporter in the room, he was the only columnist, you know, at that time. And he was looked at askance by other folks. And he never let that bother him for a moment. You know, he just marched on, and he did the stories.

He worked, as one of the editors said the other night at the party for him, Arthur Browne—Juan worked every day to dig the stories, and in the process of which he forged a bond with, I think, working New Yorkers—something I mentioned in this column I just wrote about him for the Public Employee Press, the municipal workers’ union—so that people trusted him enough to bring him news and information and stuff they weren’t supposed to talk about. And Juan was able to parlay that, along with his own inbred sense of like what’s a good story and his sticktoitiveness, into one scoop after another.

You know, you mentioned earlier in the show being the only reporter in New York to write the truth about what was happening to air quality in Lower Manhattan after the twin towers fell. I mean, just think about that for a moment. That’s a pretty remarkable scoop for anybody, under any circumstances. But more remarkable is the fact that after Juan wrote it—and it was, I think, a front-page story initially—there was such a ferocious roar back from the federal secretary for air quality, from the mayor, and then from his own editors, who then really asked Juan to tone it down and to stop doing what he was doing. And Juan, you know, he has this sheepish grin. I can—I wasn’t in the room, but I can see him just sort of shrugging and saying, “Sorry, I’m doing my job.” And the editors, I think, understood that like saying no to Juan González was not a very good idea. It just didn’t work out very well. And they’re all gone, by the way, and Juan was still there, until he got up, of his own decision, from his seat last week.

AMY GOODMAN: So, Juan, you united politicians—I won’t say across the political spectrum. You have de Blasio and Cuomo, both Democrats. But you got all these people, well over a hundred people, in this room for your retirement. How did it feel?

JUAN GONZÁLEZ: Well, it was a—you know, it was a good feeling to know that as a—because Cuomo did say—when he gave me this award, he said, “Well, Juan González has never stopped beating me like a drum,” but that he would think enough of my work to show up and to say goodbye. I even had a commissioner—former Police Commissioner Ray Kelly there, who, as Tom says, once cuffed me when I was in the Lords and he was a young cop. And so, he showed up with his wife to say goodbye. So I think it was a—it felt good to—because it’s been a long road. It’s definitely been a long road.

And I know, Tom, you and I bonded especially during the period, early on, of the Daily News strike, which was a traumatic experience for all of us. You know, five months—I don’t know how many people have been on—I’m sure many of our viewers and listeners have at one point or another been on strike. But a labor strike is a really traumatic experience in a person’s life. And we were out there for five months, and many people thought they’d never get their jobs back. But we were able to prevail, and I think that helped very much in terms of building the respect of the management of the paper, as well as of my fellow workers, that we were able to stick it out together and that I helped assist in trying to figure out the best way to do that.

TOM ROBBINS: You know, look, Juan was a two-fer. You know, I mean, papers are lucky enough to get a great reporter who’s going to dig it and can tell it really well. But Juan was an incredible organizer—is an incredible organizer. When he says that those five months were traumatic, it doesn’t begin to talk about it. But Juan never broke a sweat. You know, I mean, that was the remarkable thing. It was—the Newspaper Guild was in total chaos at the time we went out. And Juan led us together.

AMY GOODMAN: I want to thank you, Tom Robbins, for joining us. And, Juan, congratulations on all that you have accomplished. You may have left that New York Daily News, but I’m really thankful that you’re staying with your other DN. That’s right, with Democracy Now! And that does it for the show. Juan González, read all of his books: News for All the People, Harvest of Empire: A History of Latinos in America, Roll Down Your Window: Stories of a Forgotten America.

I’ll be speaking in Spokane, Washington, and then on to Olympia and Seattle. I’m Amy Goodman, with Juan González. Thank you so much for joining us. 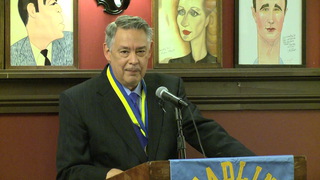