“How Many Shootings Must We Have?” Florida State Senator Calls for Gun Control After Pulse Massacre

In the wake of the deadly shooting at an LGBT nightclub in Orlando, we speak with Florida Democratic State Senator Geraldine Thompson, who represents the district where the shooting happened. Thompson is calling for Florida Republican Governor Rick Scott and other elected leaders to take action on gun control. “When will the time arrive? How many shootings must we have?” Thompson asks.

AMY GOODMAN: Vigils are being held around the country following the deadliest mass shooting in modern American history. At least 50 people have died in Orlando, Florida, early Sunday morning after a gunman opened fire at a packed gay dance club—more than a dance club, a safe haven for so many in the LGBTQ community. More than 50 others are injured, many critical in the hospital, overwhelmingly Latino. It was Latin night at the Pulse.

Still with us in Washington is Imam Daayiee Abdullah, who is executive director of the Mecca Institute, one of the first openly gay imams in the Western Hemisphere. Can you talk about coming out, Imam, what it meant and how the Muslim community responded to you, and what you’re trying to do today?

IMAM DAAYIEE ABDULLAH: OK. Well, Amy, originally, I was 15 when I was about to graduate from high school and came out to my parents, in 1969, 1970. And so, I was accepted by my parents, because I upheld the ethics that were important to them. And so, with that, I continued forward to learn to be the kind of person that I’ve come to become today. But even some decades later, when I got introduced to Islam when I was in China—I was studying there at Beijing University—ethics remained an important part in becoming a Muslim, as well.

So, the process of coming out within the Islamic community was a slower one, meaning that it was one upon which—pushed me towards becoming a scholar in the arena, because I needed to understand the context of what the text meant both in context and in content, and therefore it was an important aspect. And while living in the Middle East at the time, I was able to go to school and do studies, and found that the issues towards homosexuality was really based on the prejudices of those interpreters who were there talking about these particular issues. So, I came to learn, through that process, that many times Islam, or any religion, when it goes into a culture, cultures have certain types of taboos, and then they will morph or evolve and match their taboos with the religious understanding. So, quite often, the prejudice is not based on the text, but it’s based on interpretation and the cultural acceptance and support of that particular stigma. So, coming out in the Muslim community continues to be a problem for many people, regardless of their age. But I’m very happy to say that, over the generations, more and more younger people are being self-accepting and learning to reach out to people like myself and other religious leaders, not only in Islam, but others.

AMY GOODMAN: And, Imam Abdullah, have you heard from members of the LGBT community, Muslim members, after this attack?

IMAM DAAYIEE ABDULLAH: Yes, very much so, and been in contact with a number of different organizations. We’ve come in solidarity. Many of them have put out commentary, both on Facebook and other social media arrangements, to acknowledge the horror, but also to acknowledge that there are safe places for us to be and that we should remain in contact with each other. And this is also true within the Muslim community, because like places like Pulse in major cities or in other places, this is a safe haven for them to remove themselves from their own sequestered sense in the community, and then being able to find a place where they’re open. So, the other organizations and myself and other religious leaders, too, welcome people to definitely find safe space and to contact us and talk to us when there is the need.

AMY GOODMAN: Imam Abdullah, I want to thank you for being with us, executive director of the Mecca Institute, one of the first openly gay imams in the Western Hemisphere. We’re going back to Orlando, now, where we’re joined by Florida State Senator Geraldine Thompson, who represents the district where the shooting happened, where the Pulse nightclub—really, cultural center, political center of the community—is in Orlando. Your response to the horror that took place this weekend, State Senator?

SEN. GERALDINE THOMPSON: Absolutely heartbreaking. I am mourning still for the victims, for the family members of the victims, and just devastated by this kind of horrific act here in Orlando. I think that part of the conversation, while we are comforting the family members, but part of the conversation has to be: How do we become safer in our communities? And I think that that safety is linked to the availability of guns to people who are unstable, who may be mentally disturbed, and how easily individuals like that get weapons, including assault-type weapons that allowed Omar Mateen to go into the Pulse nightclub and to literally shoot hundreds of people. We’ve got to look at whether we want to be the kind of America where you can buy ammunition in magazines with rounds of ammunition that is usually reserved for military operations, and therefore it’s available for people like Omar Mateen, who went to the Pulse nightclub. So that has to be part of the conversation.

AMY GOODMAN: You know, I was interested—I saw you yesterday morning on television. You followed the news conference of Governor Rick Scott.

SEN. GERALDINE THOMPSON: I did, yes.

AMY GOODMAN: He was saying people should pray. And as the group walked away, you came forward. They weren’t surrounding you when you spoke, to say the least. And you said you want this to be your first conversation with the governor. What is Governor Scott’s response, not only at the state level, but also nationally, when you talk about this issue? What exactly are you calling for? The weapon—one of the weapons used, I think Mateen had an AR-15, which was a semiautomatic rifle that would have been banned under the assault weapons ban, that was allowed to sunset by Congress over 10 years ago. He had a Glock pistol. In his car, he had a Smith & Wesson. What are you calling for now? And what are the rules in Florida?

SEN. GERALDINE THOMPSON: I’m asking the governor and other elected leaders to re-examine our laws with regard to the availability of guns. Governor Scott said in the news conference yesterday that this is not the time. When will the time arrive? How many shootings must we have? This is the deadliest shooting, mass shooting, in our nation’s history. So when is the time going to arrive? One of the things that I remember about Dr. King’s Letter from the Birmingham Jail, when he said that people were saying, “It’s not the time for integration, and it’s not the time to end to segregation and to give people basic human rights,” and his response that people who say “wait” really mean “never.”

And so, I am calling on Governor Rick Scott, I’m calling on other elected officials, to look at our laws. Omar Mateen had a license to be a security guard, even though his wife had reported that he was abusive, that he was prone to violent outbursts. And we need a database that helps us identify unstable people. And our laws do allow the use of some of the weapons that he had in the performance of his duties as a security guard, but not off duty. And so, we have to look at that, as well. We know that if you’re on a terrorist watchlist, for example, you could not board a plane in the United States, but you can buy a gun. And so, there’s a problem with that. We’ve got to close that terror loophole. And it’s up to our elected leaders to do that. And citizens at the grassroots level have to say to elected leaders that as elections come about—and elections do have consequences—one of the questions that citizens have to ask before they go to the polls is: Where does a person who wants to be elected stand with regard to ending gun violence in this country?

AMY GOODMAN: You know, it’s interesting. So often in these cases, the NRA says—the National Rifle Association—they won’t comment, they don’t to make it political at this time, right after the shooting. Immediately, you see “terror strikes,” and everyone will talk about the issue of terrorism. But when it comes to guns, they say this isn’t the correct time or place. Do you see this as a terror attack, State Senator?

SEN. GERALDINE THOMPSON: I do see it as a terror attack. I am the former chair of the Florida Commission on Human Relations, and we dealt with hate crime. And this was obviously a hate crime that was targeted to individuals based on their sexual orientation and based on people—based on their ethnic background. It was Latin night at the Pulse nightclub. So, it was a hate crime perpetrated against two different groups of people.

And unfortunately, we hear people who are offering themselves for leadership, who are encouraging demeaning and disparaging other groups because they are different. And when people are seen as different, many times they are seen as inferior. And that difference could be based on the color of their skin, as we saw in Charleston, South Carolina. It could be on—based on an ideological idea or difference in perspective, as we saw in the shooting with the Planned Parenthood facility. And certainly, in this case, it’s based on sexual orientation and ethnic background. So, it’s a hate crime. And when leaders encourage violence at political rallies, for example, and demean and disparage certain individuals, that gives license to people who are unstable to say that this is acceptable and that this is OK, and they carry out these kind of acts. So I think we have to be very, very careful about the rhetoric that we’re hearing from individuals who are looked up to in this country.

Australia Stopped Mass Shootings After 1996 Massacre, So Why Doesn’t the U.S. Follow Suit?

NEXTAustralia Stopped Mass Shootings After 1996 Massacre, So Why Doesn’t the U.S. Follow Suit? 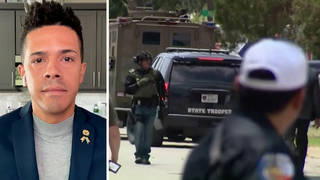