Naomi Klein: There Would Be No Bernie Movement Without #FightFor15, Keystone XL & #BlackLivesMatter

At The People’s Summit in Chicago, author and activist Naomi Klein looks at the link between the Sanders campaign and the growth of other people-powered movements in recent years, from #BlackLivesMatter to the immigrant rights movement.

JUAN GONZÁLEZ: Naomi, I wanted to ask you, because the international aspect of this, we are not in isolation, what is going on here, whether it’s Syriza or Podemos or—across the world, there is a people’s fightback going on. And this is only a reflection of that. I’m wondering your sense of that from your travels.

NAOMI KLEIN: Yeah, I mean, there has been this migration from the streets to forming political parties. And it’s complicated, right? Because I completely agree that all of this work on the electoral front and the diversifying and the—on every level and brand-new Congress, it’s really, really important. But we also have to remember that movements produced this moment. Right? So I think that we have to—we have to do something really complicated, where we have to—we have to build out all of these electoral possibilities while understanding that these politicians will be nothing unless they are backed by social movements and accountable to those social movements. Right? I mean, there would be no Bernie moment without the Fight for 15, Keystone XL, the movement against fracking, Black Lives Matter, the immigrant rights movement—all of it, right? So, it’s not an either-or.

And I think that that’s what’s really beautiful about the way we’re moving forward, is understanding how do we complement each other, how do we make sure that we don’t—because I think with some of these movements—right?—they went too far in. Right? I mean, speaking to some friends in Spain who—you know, who went from the squares to Podemos, realizing that they—you know, it was—they lost that street power. Syriza, as well, right? And so, you know, everybody is in this process of learning. We’re all—you know, we’re all in communication with each other. I mean, I remember being in Zuccotti square and having people from Spain and Egypt there, and that cross-pollination that fed the movements at the grassroots level and are now giving each other ideas at the political level. And by the way, the Podemos leadership will be the first to tell you that they learned from left-wing movements in Latin America. You know, they went to Ecuador, they went to Bolivia, you know? So, we are in conversation.

And I’ll tell you a funny story. You know, I have dual citizenship. I’m Canadian. I only tell this among friends, that I’m a child of draft dodgers. We came during the Vietnam War. And—but—but—but my father works in healthcare, so we left the U.S. because of the war, but we stayed for the healthcare, for the universal, single-payer healthcare. It works, by the way.

Anyway, so we found ourselves in a—I want to back up a little bit to around—I just want to insert one point, and I feel my friend Bill McKibben on stage with me now, who is, you know, fighting in a sweaty Phoenix hotel room, trying to get the best—you know, best language in the Democratic Party platform possible, trying to make sure it has strong anti-fracking language and strong language saying we can’t be handing out any new fossil fuel leases on federal lands. You know, he’s in there. And if Bill were here—and he wishes he was here—you know what he would say? We’ve got a deadline, folks. You know? Yes, we’re winning, but we don’t have all the time in the world. And this is the thing about climate change, is, you know, we—whoever the next president is, they come to power with their backs up against the wall when it comes to climate change, which means there’s no honeymoon, baby. There’s no “give her a chance,” you know? I mean, we have to be in there demanding no new fossil fuel infrastructure. We need to build the infrastructure of the future. No fossil fuel money. We’re going to shame them for every dollar they take from an oil and gas company, from a coal company, every meeting they take. Yeah, we’re going to make it toxic, right? So, you know, I’m a writer, as I mentioned, and I think deadlines help. You know, this is the thing about climate change, is it says we have to turn this around by the end of this decade. No joke. Our emissions have to be pointing in a different direction. The challenge we face is: How do we transform our energy system, recognizing that we live at a time of multiple overlapping crises? That, yes, climate change is an urgent crisis banging down our doors, but so is racial injustice, so is economic inequality, so are all of these other crises we face. So we’re not going to play my crisis is bigger than your crisis, first we’ll save the planet, then we’ll worry about jobs. No, we are going to figure out ways to lower emissions while healing the wounds that date back to the founding of our countries. And it is possible to do.

So, in Canada, we found ourselves in a situation not dissimilar to the one that, you know, you are finding yourselves in, where we had an election a year ago, and mostly, the energy of that election, on the progressive side, was the energy of no. This is before everybody got really excited about our hot new prime minister. It was just about getting rid of our right-wing government. And so, it was very much a no vote, it was very much a strategic vote. And none of the major progressive—so-called progressive or liberal alternatives were taking climate change seriously, were connecting economic injustice, racial injustice, injustice towards indigenous people, and the need to act swiftly and with boldness in the face of the climate crisis. And so, a group of us got together, 60 movement organizers and leaders, and we wrote our own people’s platform called The Leap Manifesto. And it—and we launched it, right in the middle of the election platform. This was our attempt to say our dreams don’t fit on your ballot. We are going to vote out the worst guy, but that does not represent the world we want. And we created space to dream. And what was interesting, just—it was that platform—The Leap Manifesto was just sort of endorsed by one of our major political parties, the New Democratic Party. And it was the young people. They resolved—they endorsed it in spirit and resolved to debate it at the riding level across the country. And it was the young people in the party that drove it. And I was watching this play out. I wasn’t at the convention. But the young people, several of them, were wearing Bernie T-shirts, as they were—as they were making their impassioned pleas that now is the time for boldness, that we—that small steps are not enough. So we are all feeding each other’s movements, and we’re all drawing strength from each other.

AMY GOODMAN: That’s author and activist Naomi Klein; before that, Rosario Dawson and Democracy Now!'s Juan González, at The People's Summit in Chicago. We’ll be back to talk about gun control in a minute.

If Australia Can Do It, Why Not Us? How a Conservative Gov’t Enacted Gun Reform After Mass Shooting

NEXTIf Australia Can Do It, Why Not Us? How a Conservative Gov’t Enacted Gun Reform After Mass Shooting 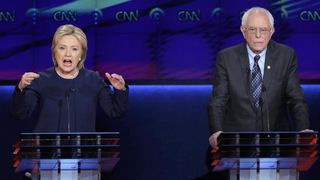