In a major setback for the immigrant rights movement, a divided Supreme Court has blocked President Obama’s plan to shield as many as 5 million undocumented immigrants from deportation. On Thursday, the court returned a 4-4 ruling, leaving in place a lower court decision that Obama had overstepped his authority. The case concerned Obama’s Deferred Action for Parents of Americans program, or DAPA, which would have shielded millions of immigrants with U.S. citizen or permanent resident children from deportation. It also affects Obama’s attempt to expand the existing Deferred Action for Childhood Arrivals program, or DACA, which since 2012 has protected immigrants brought to the United States as children. The ruling is likely to further amplify the role of immigration in the 2016 presidential election. We speak with Thomas Saenz, president of the Mexican American Legal Defense and Education Fund, who was one of four attorneys to argue the immigration case before the Supreme Court.

JUAN GONZÁLEZ: In a major setback for the immigrant rights movement, a divided Supreme Court has blocked President Obama’s plan to shield as many as 5 million undocumented immigrants from deportation. On Thursday, the court returned a 4-4 ruling, leaving in place a lower court decision that Obama had overstepped his authority. The case concerned Obama’s Deferred Action for Parents of Americans program, or DAPA, which would have shielded millions of immigrants with U.S. citizen or permanent resident children from deportation. It also affects Obama’s attempt to expand the existing Deferred Action for Childhood Arrivals program, or DACA, which since 2012 has protected immigrants brought to the United States as children. At a news conference in Los Angeles, undocumented immigrants responded to the Supreme Court’s tie.

MARIA ORTIZ: [translated] I had this little bit of hope that I would be able to see my parents, which has now been dashed. But I also know that we will not stop. Together, we will continue to fight, because this fight must go on, and it will not stop. We need to knock on doors and touch hearts, because we are immigrants who came to this country to carry it, not to burden it, and we deserve an opportunity to be here legally.

GABRIELA CID: Today also reminds me that we just have to keep fighting, because so many millions of people, like my parents, are waiting for this. And it has been a very long fight, one that I’ve been involved in for a very long time, and it’s very tiresome. But just remembering all those moments helps you remember that we always stand up and fight back. And that’s what we continue doing. We continue moving forward.

PRESIDENT BARACK OBAMA: For more than two decades now, our immigration system, everybody acknowledges, has been broken. And the fact that the Supreme Court wasn’t able to issue a decision today doesn’t just set the system back even further, it takes us further from the country that we aspire to be.

JUAN GONZÁLEZ: Meanwhile, Republican Texas Attorney General Ken Paxton welcomed the ruling, saying it, quote, “keeps in place what we have maintained from the very start: one person, even a president, cannot unilaterally change the law. This is a major setback to President Obama’s attempts to expand executive power, and a victory for those who believe in the separation of powers and the rule of law,” unquote. The ruling is likely to further amplify the role of immigration in the 2016 presidential race.

AMY GOODMAN: For more, we’re joined now by three guests. In Los Angeles, we’re joined by Thomas Saenz, president of MALDEF, the Mexican American Legal Defense and Education Fund. He was one of four attorneys to argue the immigration case before the Supreme Court. And in Seattle, Washington, we’re joined by Maru Mora Villalpando, an activist and undocumented immigrant with the group Latino Advocacy and part of the #NotOneMoreDeportation campaign organized by the [group Mijente], one of millions of people impacted by the Supreme Court’s ruling. And we’re joined by her daughter, as well, Josefina Mora, who is a U.S. citizen.

We’re going to start, though, with Thomas Saenz, who was one of those lawyers who argued this case before the Supreme Court. Split decision, 4-4, your response?

THOMAS SAENZ: It’s a disappointment. But it really points out how dysfunctional and politicized our system, even in the courts, has become. The fact that there are only eight justices is a fact that comes to us because the United States Senate refuses to do its job and pass on the nomination put forward by President Obama. In fact, Judge Garland was nominated to the court more than 30 days before the argument in this case, more than enough time for him to have been seated to hear the argument and to render a decision in this case together with his colleagues. In addition, of course, the 26 states, who are responsible for seeking to stop a program that would only benefit their state and their residents, should be held accountable for continuing to hold hostage this important initiative announced by the president in November of 2014 to provide temporary relief to so many millions of people who are raising families, contributing to our economy and society year after year after year.

JUAN GONZÁLEZ: And, Thomas Saenz, just to get clear on what the deadlock was over, it wasn’t a deadlock over the substance of the issue, but a deadlock over whether a preliminary injunction would be issued, pending resolution, right? Could you explain that?

THOMAS SAENZ: That’s correct. This was a decision on preliminary injunction. So, the litigation is ongoing. There’s still action to be taken in the courts. And we, together with the United States government, will be working in the courts to try to ensure that the president’s authority, well established by all of his predecessors, to engage in this kind of prosecutorial discretion is vindicated, approved, and that relief can be provided.

JUAN GONZÁLEZ: But you’ll have to go back to the U.S. district court in Texas to actually argue the case itself, the substance of whether the president does have the power to issue these temporary stays.

THOMAS SAENZ: That’s correct, unless there is a petition for rehearing, which is something that we and the government, I am certain, are looking at, which is whether to ask the Supreme Court to hold the case over until it has a ninth justice, and rehear the preliminary injunction appeal.

AMY GOODMAN: Thomas Saenz, you are representing three mothers in this country without documentation, who have U.S. citizen children. When you argued before the high court, you said they live in daily fear of being detained or deported. What happens now?

THOMAS SAENZ: Well, unfortunately, the status quo remains. They will continue to live in that daily fear, which is why what the president announced was such wise policy and really to the benefit of everyone, including the governors and attorneys general in those 26 states, who nonetheless took it upon themselves to block the program nationwide. In fact, these are folks who deserve to have that protection from the daily fear, including the fear experienced by their U.S. citizen children, many of them very young, who go to school every day not knowing whether they’ll come home to an empty home or to the absence of one of their parents, who might have been placed in detention or removal proceedings. This is a very reasonable response to the fact that these are important components of our community. These are folks who are contributing to our economy, to our society, and deserve to live without that daily fear and deserve to live with work authorization, so they can continue to raise their families successfully in this country.

JUAN GONZÁLEZ: But just to be clear, the president, in his statement yesterday, said that as far as he’s concerned, the issue of deportations will remain as it is now, with a low priority by the administration for law-abiding, undocumenteds to be deported. The only issue here is whether they’d be able to get temporary work authorizations under this program, right?

THOMAS SAENZ: Well, first of all, work authorization is really critical for folks to have the right to work and support their families with full legal protections. But moreover, there have been problems in the immigration enforcement scheme under this administration, where rank-and-file officers around the country have not followed those enforcement priorities and have placed people who are clearly, by anyone’s consideration, low-priority targets into deportation and detention. And that’s the problem that the announcements in November 2014 of an expansion of DACA and the implementation of DAPA would have addressed. It would have ensured nationwide uniform enforcement of those priorities when it comes to immigration issues. 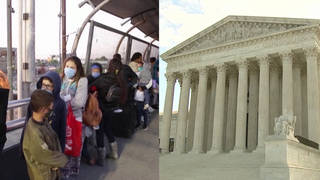