As Extreme Weather Sweeps Across U.S., Is New Democratic Platform on Climate Change Too Weak?

Extreme weather is sweeping across the United States, from scorching heat in the Southwest to uncontrollable wildfires in California, to deadly flooding in Appalachia. In West Virginia, at least 23 people have died in once-in-a-thousand-year flooding, and a number of people remain missing across the state. Meanwhile, wildfires are raging up and down the state of California. At least two people have died, and hundreds of homes have been destroyed. May was the 13th straight month to smash global temperature records, amid increasing human-fueled global warming. We speak with Michael Mann, a professor of atmospheric science at Penn State University. Mann was in Phoenix last weekend to testify before the Democratic National Platform Draft Committee meeting.

AMY GOODMAN: This is Democracy Now!, democracynow.org, The War and Peace Report. I’m Amy Goodman, as we turn to extreme weather sweeping the United States, from scorching heat in the Southwest to uncontrollable wildfires in California, to deadly flooding in Appalachia. In West Virginia, at least 23 people have died in a once-in-a-thousand-year flood. West Virginia Governor Earl Ray Tomblin has declared a state of emergency in 44 counties and has deployed the National Guard to help with search and rescue efforts. A number of people remain missing across West Virginia. Meanwhile, wildfires are raging up and down the state of California. At least two people have died, and hundreds of homes have been destroyed. On Thursday, Kern County Fire Department Chief Brian Marshall spoke out.

FIRE CHIEF BRIAN MARSHALL: This is a lot of damage. This is going to go down as the most destructive wildland fire in Kern County’s history. And these people, they’ve been displaced, and they want to go home. So that’s why we’re here today, to start that process.

AMY GOODMAN: All this extreme weather comes after scientists confirmed May was the 13th straight month to smash global temperature records amidst increasing human-fueled global warming.

For more on climate change and extreme weather, we’re joined by three guests. In State College, Pennsylvania, we’re joined by Michael Mann, professor of atmospheric science at Penn State University, was in Phoenix last weekend for the Democratic National Platform Draft Committee meeting. In Sacramento, California, we’re joined by Ken Pimlott, the director of the California Department of Forestry and Fire Protection and a 30-year fire service veteran. And in Richwood, West Virginia, we’re joined by Mayor-elect Bob Henry Baber. Richwood is one of the towns hardest hit by the flash flooding. Bob is also the first member of the Mountain Party to be elected to public office in West Virginia.

We welcome you all to Democracy Now! We’re going to go directly to West Virginia. Oh, I’ve just heard that we’re having a little trouble with the line, and so we’re going to turn to Michael Mann at Penn State University in the AccuWeather studios. Can you talk about the significance of, well, where you just were—Arizona—the temperatures, what, topping like 120 degrees, and what’s happening in West Virginia to California?

MICHAEL MANN: Sure. Thanks, Amy. It’s good to be with you. So, I was out in Phoenix about a week ago giving testimony to a committee hearing for the Democratic National Platform Committee, and I was talking about the reality of climate change and the fact that the impacts of climate change are no longer subtle. And I pointed to various examples, some of which you’ve listed already. But one of those examples was the fact that, one or two days later, Phoenix was going to be experiencing not just extreme heat, but record heat. And, in fact, we’ve seen a doubling of the rate of record-breaking heat in the U.S. over the past several decades. That means we’ve literally taken the dice and loaded them so that sixes, if you will, come up twice as often as they ought to, not one in six times, but one in three times. We’ve doubled the odds of these extreme weather events, extreme heat and many other types of extreme weather events, like unprecedented floods, unprecedented droughts, unprecedented superstorms.

AMY GOODMAN: So, you were at the Democratic Platform Committee that took place in where? In Phoenix, which was like what? A hundred and six degrees? What did you tell them?

MICHAEL MANN: I did. It was 106, but I told them that a day later it was going to be flirting with 120 degrees, record heat. And what I pointed out was the fact, again, that the impacts of climate change are no longer subtle. It used to be the case that climate change was sort of this abstract concept, and you needed to sort of really dig into the data and the model output to really find the signal of climate change. Well, we now see the signal of climate change with our own two eyes. It plays out before us in the 24-hour news cycle, in the headlines of the newspapers we read. And so, that was a part of my message. Part of my message was also that it’s not too late to solve this problem, but it’s going to take concerted action. And in particular, we need to put a price on carbon. We need to level the energy market playing field so that renewable energy, which is not degrading our planet in the same way, can more fairly compete with fossil fuel energy. And one of the things I recommended was that the platform really embrace this.

AMY GOODMAN: And what kind of language have Democrats put into the platform around climate change?

MICHAEL MANN: Well, it’s a pretty strong platform. It commits to a rapid de-escalation of our burning of fossil fuels. It commits to meeting our energy needs with 100 percent renewable energy by the middle of the century. And it’s pretty tough in the language that it uses in condemning fossil fuel interests that have knowingly misled the public about the nature and threat of climate change. So I thought it was a strong—a strong platform. There are others who feel that—you know, who would have liked to see more specific language, for example, about a carbon tax, about policies about fracking. I think it sort of took a big-picture approach, and we will need to work out those details, if we’re going to tackle this problem. We will need to tackle—you know, the devil is in the details, as they say.

AMY GOODMAN: What do you say to the presumptive Republican nominee, Donald Trump, who dismisses climate change—human-induced climate change almost entirely? It was one of the reasons he said he would not go to where the pope was, when he came to New York, because he talked about climate change and human beings exacerbating it.

MICHAEL MANN: Yeah, well, you know, to use the language of Winston Churchill, this is an age of consequences. And it’s an age for serious people. We are dealing with serious problems, none of them more serious than the threat of catastrophic climate change. And we don’t have time to squander. We don’t have time to engage in silly debates about whether the problem even exists. And unfortunately, the standard-bearer of the Republican Party, Donald Trump, does deny that the problem even exists. Look, there’s a worthy debate to be had about policy, about what we do to combat this problem. There is no longer a worthy debate to be had about whether the problem exists. We have to get past that. And unfortunately, right now we have a Republican Party that seems committed to the notion that climate change is a myth. Not all Republicans. There are some very—there are some real leaders even within the Republican Party on the issue of climate change, folks like Bob Inglis of South Carolina. But, unfortunately, their party has been seized by the Koch brothers and fossil fuel interests, who are doing everything they can to prevent any progress from being made.

AMY GOODMAN: When you say anything they can, what exactly are they doing?

MICHAEL MANN: Well, they’re literally poisoning not just our atmosphere, but the public discourse. The Koch brothers and other fossil fuel interests have literally spent tens of millions of dollars in a massive disinformation campaign to convince the public that climate change is a hoax, that it’s not real, that it’s not a problem. It’s precisely what the tobacco industry did in decades past. And now we see the fossil fuel industry using the very same playbook to try to fool the American people, the public, into thinking that there isn’t a problem, that we don’t have to incentivize this shift away from fossil fuels, towards renewable energy. But the fact is, we do need to do that, if we are going to avert catastrophic climate change.

AMY GOODMAN: In a moment, we’re going to go to West Virginia and California—West Virginia, where it looks like two dozen people have died in the most recent once-in-a-thousand-year flood, and California, the wild raging fires. Can you connect these two?

MICHAEL MANN: Yes. I mean, we—climate change has literally changed the fabric within which all weather now occurs. The atmosphere has about 5 percent more moisture than it did a century ago because of the warming of the atmosphere. Warmer air holds more moisture. And so, one of the things that we’ve long predicted—and we’re seeing it play out—is that we see more extreme precipitation events, more extreme rainfall events, these thousand-year floods that we’re seeing in South Carolina, in Texas, around the world, that clearly is—it bears the fingerprint of human-caused climate change, the fact that we are seeing so many more extreme floods. At the same time—it might seem contradictory, but it’s not—even though you get more rainfall, when it occurs, rainfall events in many regions, like North America, become less frequent, especially during the summer. And so, you get more extreme drought. You get the unprecedented drought that California is dealing with right now. And, of course, the wildfires they’re dealing with are a consequence of the unprecedented drought and record heat that they’ve seen out there on the West Coast. So, what we’re doing is we’re changing the atmosphere in a way that we get more extreme rainfall events, when we do get that rainfall. But often that rainfall is fewer and farther between, and we get more prevalent drought. 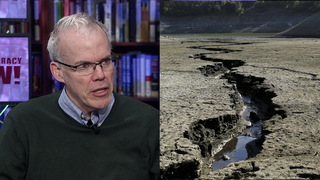