Rep. Keith Ellison: Arrest the Officer Who Killed Philando Castile, He Has to Be Held Accountable

More than 300 people were arrested over the weekend as protests against police brutality erupted in more than a dozen U.S. cities over the fatal police shootings of Alton Sterling in Baton Rouge, Louisiana, and Philando Castile in Falcon Heights, Minnesota. Philando Castile’s death comes on the heels of massive protests over another fatal police shooting in Minnesota last year: the police killing of Jamar Clark. Authorities say Clark was shot in the head after a scuffle with officers who responded to a report of an assault. But multiple witnesses say Clark was shot while handcuffed. For more, we speak with Minnesota Democratic Representative Keith Ellison. He is also one of the five people picked by Bernie Sanders to serve on the Democratic National Committee Platform Drafting Committee.

Watch Part 2 || Rep. Ellison: Why is the Democratic Party Afraid to Mention the Israeli Occupation in Platform?

Web ExclusiveJul 11, 2016Rep. Ellison: Why is the Democratic Party Afraid to Mention the Israeli Occupation in Platform?

AMY GOODMAN: Protests against police brutality erupted across the United States over the weekend with tens of thousands of people taking to the streets, blocking roads, bridges and highways in cities from Chicago to Atlanta to Baton Rouge to St. Paul, Los Angeles, Phoenix, New York City. More than 300 people were arrested nationwide, including 160 in Baton Rouge, where two white police officers killed Alton Sterling last Tuesday morning, an African-American father of five. In Minnesota on Wednesday, Philando Castile was killed by police. More than a hundred people were arrested Saturday night at Interstate 94 during a standoff with police.

Welcome to Democracy Now!, Congressman Ellison. Start off by talking about what happened to Philando Castile. What many people are calling for right now is the immediate arrest of the officer. Can you talk about whether you support this and what you feel needs to happen?

REP. KEITH ELLISON: Well, let’s start out with the fact that Philando Castile was arrested 52 times before he ever got to the fateful one that resulted in his loss of life. I really doubt that this is just him being a bad or unlucky driver. Probably has much more to do with the fact that he’s a black man driving in one of our suburban communities and is targeted for that. People might say, “Well, how do you know that?” Well, I do know that African-American teenagers are shot 21 more times, more often than their white counterparts. And I know that African-American motorists are stopped, you know, maybe—significantly more than their white counterparts. And so, it is reasonable to say that he was stopped for an impermissible reason—that is, race.

So then we arrive at the fateful day when he’s stopped, and the first explanation they give is that he’s stopped for a busted taillight. Within moments, we see that he’s—his girlfriend is narrating in real time that he’s going for his wallet, as he was commanded to do, and then he is shot and killed by a shrill, panicked-sounding officer as this young woman is incredibly well poised as she’s narrating to the world what’s happening to Philando, as her four-year-old child is sitting there.

Now, look, I’m a defense attorney of many years, and I’m not one to say that people don’t get their due process. Everyone gets it. That’s the way it is. But in this particular case, it seems very clear to me this officer was out of control. He used excessive force, resulting in the death of Philando Castile. And there needs to be accountability.

AMY GOODMAN: Do you think he should be arrested, the officer?

REP. KEITH ELLISON: Arrest is part of the normal course of the police process, right? That’s the way it goes. I mean, that’s the normal—that’s part of what happens. I mean, they could give him a summons and tell him to show up, or they could arrest him. But demanding—but obsessing on whether he’s arrested or comes into the court system by another system, to me, is the smaller point. The bigger point is, he has to be held accountable, because you don’t get to shoot people. And Castile never should have been killed that day. He should have been able to—he never should have—probably should never have been stopped that day.

AMY GOODMAN: What about an independent investigation, what protesters are also calling for?

AMY GOODMAN: And what would that look like in Minnesota?

REP. KEITH ELLISON: Well, I believe there should be an independent federal investigation, but I do support—and I support that and have called for that publicly. But I also believe that the Bureau of Criminal Apprehension should engage in an investigation. I don’t believe the Falcon Heights Police Department or St. Anthony Police Department should be investigating this case. I think there must be an independent. But I also think we need to—I think the county attorney needs to publicly declare that he will not go through and use the grand jury. This is a system that’s used to literally whitewash police officer-involved shootings, not just in Minnesota, but all over the country. And I think that we need our law—our prosecutorial authority to step up and say, “This is the law. These are the facts. We’re going to put this in front of a jury, and they get to decide what they decide.” But there’s going to be some accountability here, because this is an outrageous, epidemic problem.

REP. KEITH ELLISON: Well, the officers were there to try to protect and provide safety for the demonstrators. Their killing is a horrible, horrible, atrocious situation, which we all have to condemn. But let me say this: Whenever we do not make sure that there’s police accountability broadly, sick, demented, broken people will—the chance that they come out of the woodwork goes up. I think that you can’t ever predict when someone is going to do something like this guy Micah—I can’t think of his last name.

REP. KEITH ELLISON: Yeah, yeah. I can’t think of—you know, you never know when a horrific event like this is going to happen, very hard to predict. But I can tell you this: I think that we ensure the safety of our officers when officers who do not comply with the Constitution and the laws of our country, all over the country, are brought to account, because that gives the public the general idea that there’s equality before the law. Now, maybe this could not have been stopped. Maybe this sick, demented, homicidal person could not have been prevented. But I hope that if we have greater accountability, if the public believes that if a citizen violates the law, they will be held accountable, if an officer violates the law, they will be held accountable, then people who did move toward the lunatic extremes will be suppressed and will be dissuaded from going in the direction that this guy obviously went in.

So, I have tremendous sympathy for these officers. They were providing water. They were protecting demonstrators. It’s a horrible tragedy, and I honor their memory and thank them and their families for the service that they gave. But also, I think it’s certainly within our—within our purview to say that we believe that the police who violate the law and dishonor the badge should be held accountable, and so should citizens when they murder police officers. Of course, we know that Micah X. Johnson is—died, himself. But I think that they’re two independent events, both tragic, and require our action to make sure we protect people.

AMY GOODMAN: Congressmember Ellison, we just have a minute, and I want to ask you about the Democratic platform committee.

AMY GOODMAN: It’s believed that Senator Sanders is going to throw his support to Hillary Clinton tomorrow in New Hampshire. They’re going to have a joint meeting there and press conference. What happened at the platform committee? Are you satisfied with the Democratic platform? You were one of Sanders’ representatives on that committee.

REP. KEITH ELLISON: Am I satisfied? No, because I tend not to be. I have a thirst for justice, and I’m always striving in that direction. But am I happy, and do I believe this is the most progressive platform that I’ve ever seen? The answer to that is resoundingly yes. I think that Bernie Sanders, through his campaign, through the appointments he made to the Platform Drafting Committee, and the platform committee has set forth a set of ideals for the Democratic Party which will attract, excite, electrify the base. And I think that we’ve made dramatic steps forward—15 and a union indexed. We have the strongest statement that I think we could get against TPP. We did not come out with a total rejection of it, but we set up standards that it clearly does not meet, and said that we—that any trade agreement must meet these standards, which TPP doesn’t meet.

AMY GOODMAN: We’re going to talk about the rest of the platform and post it online at democracynow.org. Congressmember Ellison, thanks so much for joining us.

Rep. Ellison: Why is the Democratic Party Afraid to Mention the Israeli Occupation in Platform? 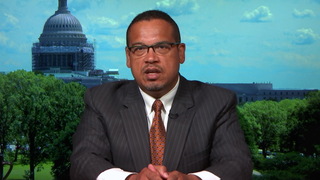 Rep. Ellison: Why is the Democratic Party Afraid to Mention the Israeli Occupation in Platform?