With the national political conventions beginning next week, protests against police brutality continue to sweep across the country in the wake of the fatal police shootings of African Americans Alton Sterling in Baton Rouge, Louisiana, and Philando Castile in Falcon Heights, Minnesota. Racial justice has been one of the core issues of the 2016 presidential election cycle. With the Democratic and Republican parties decided on their nominees—former Secretary of State Hillary Clinton and real estate mogul Donald Trump—many are asking: Which will most push for racial justice? The answer, at least to Princeton professor Eddie Glaude, is neither of them. We speak with Eddie Glaude, chair of the Department of African American Studies at Princeton University, and his son, Langston, who is an undergraduate at Brown University. Eddie Glaude said, “Those of us who are not in the battleground states, those of us who are in blue states or red states, we should just leave the ballot blank.”

AMY GOODMAN: We’re speaking to Professor Eddie Glaude. He is chair of African American Studies at Princeton University, author of several books, his latest, Democracy in Black: How Race Still Enslaves the American Soul. You named your son Langston Glaude, Langston, who is still with us, a junior at Brown University. Langston Hughes, who wrote that famous poem “Dream Deferred.”

What happens to a dream deferred?
Does it dry up
like a raisin in the sun?
Or fester like a sore—
And then run?
Does it stink like rotten meat?
Or crust and sugar over—
like a syrupy sweet?

Or does it explode?

EDDIE GLAUDE: Yeah, you know, I mean, part of what I’ve tried to do with my son over the course of—the hardest thing that I’ve ever done is to try to raise a child—and I say “try”—is to give him access to this wonderful tradition, that informs how we see ourselves and how we see ourselves in the world. And what I’m most proud about is that when we were deciding to write this letter, you know, I remember Langston telling me, “Dad, I don’t want to be the poster child of a pity party.” Right? “I don’t want to be the excuse for white sentimentality.” Right? Sounding like Richard Wright, right? What he wanted to do was to provide an occasion—I shouldn’t speak for you, L—but to provide an occasion to put forward—right?—the feelings and vision of his generation, to give voice to it. And he did it in the intimate setting of his relationship with his crazy father. So, I don’t want to speak for you, L, but, you know, this idea of really thinking about the politics of your generation is so important.

AMY GOODMAN: You know, a lot of people talk about the conversation they have with their sons, and I wanted to turn to the New York mayor, Bill de Blasio, who did just that in 2014, about he and his wife Chirlane’s—who’s African-American—fear for their teenage son Dante.

MAYOR BILL DE BLASIO: Chirlane and I have had to talk to Dante for years about the dangers he may face. Good young man, law-abiding young man, who never would think to do anything wrong, and yet, because of a history that still hangs over us, the dangers he may face, we’ve had to literally train him, as families have all over this city for decades, in how to take special care in any encounter he has with the police officers who are there to protect him. And that painful sense of contradiction that our young people see first, that our police are here to protect us and we honor that, and the same time, there’s a history we have to overcome because for so many of our young people there’s a fear, and for so many of our families there’s a fear.

NERMEEN SHAIKH: And, Professor Glaude, can you talk about what you say you in your book, Democracy in Black, about racial habits and what you call the value gap, in the context of what Langston said?

EDDIE GLAUDE: Yeah, Langston just hit it dead on the head, right? I talk—we talk about the achievement gap and the wealth gap in this country, but at the heart of all of it is the value gap. And the value gap is the belief that white people matter more. And that belief has animated our social practices, informed our political and economic arrangements, from the moment in which we gave voice to the principles of freedom, liberty and equality, and reconciled it with the institution of racial slavery, to the moment in which we elected our first black president, and then we heard the vitriol of the tea party and then a wholesale attack on voting rights. So there’s always this kind of sense that white people matter more. And to the extent that’s true, no matter what the inputs are, the outputs will be the same. And those who are valued less, their lives have a sense of precariousness.

But we want to be careful. The value gap is not simply the possession of loud racists. That’s too easy. That’s melodramatic. It’s actually evidenced in our habits, in the very ways in which we live our lives, the fact that, “Oh, I just want my kid to go to the best school,” and usually that phrase means “How many black and brown kids go to that school?” “Oh, I want to just live in a nice neighborhood”—usually, that’s just a shorthand for “How many black and brown people live in this neighborhood? Is it mixed-income?” Right? So there’s a way in which we’re making day-to-day choices.

And I use this example. I believe the planet is warming. I do. I’m not a climate change denier. But if you look at my house and you look at my car and you look at the light bulbs in my house, you would think I think the planet is OK. I’m making choices, day in and day out, that contribute to the warming of the planet, but I’m not running around loudly saying, “No, no, the science is wrong.” That’s just the way racial inequality works. It’s not about intentional prejudice. It’s about a culture practice, as Professor Imani Perry says.

AMY GOODMAN: I want to end just by asking you and Langston about your choice for president. Bernie Sanders just endorsed Hillary Clinton. Your thoughts on that? Then we’re going to have a post-show conversation.

EDDIE GLAUDE: Yeah, I’m not—you know, I believe, like José Saramago in Seeing, that wonderful novel written by that Portuguese writer, Nobel Prize winner 1996, that we should blank out, that those of us who are not in the battleground states, that those of us who are in blue states or red states, that we should just leave the ballot blank. As Melville’s Bartleby, scrivener, says, “I prefer not.” I can’t stand either one of them.

AMY GOODMAN: Langston, your thoughts on the election?

LANGSTON GLAUDE: I agree 100 percent. You know, there needs to be a stance amongst the people that we are not going to simply accept the status quo any longer, especially when the status quo is the very thing that is costing us our lives and our livelihoods. So, I personally don’t find either one of the candidates favorable in any sense, because, again, a change needs to come on the behalf of the people, and I don’t believe either one is prepared to bring that change in the manner that we need it.

AMY GOODMAN: We’re going to have to leave it there. I thank you both for being with us, Langston and Eddie Glaude. Eddie Glaude’s new book, Democracy in Black: How Race Still Enslaves the American Soul. He’s chair of African American Studies at Princeton University. Langston is at Brown. 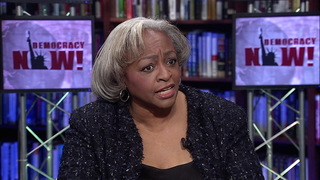