The epilogue of Vijay Prashad’s new book, “The Death of the Nation and the Future of the Arab Revolution,” examines the undercovered conflicts in Yemen and Palestine, and the role of Saudi Arabia. “The poorest Arab country is being destroyed by the richest Arab country,” Prashad says. “The very people that are out on the streets demanding that Israel stop bombing Gaza need to be out on the streets demanding that Saudi Arabia stop this murderous war against Yemen.”

AMY GOODMAN: You have an epilogue in your book, “Yemen and Palestine.”

VIJAY PRASHAD: Yeah, so, if you consider that there have been two situations where the bombing has been ruthless—in Palestine, of course, there is an occupation, and the occupation has been on, you know, for decades. But in the last 15 years, Israel has, in a punctuated fashion, bombed Gaza. And it’s bombed Gaza, been resupplied by the West, received diplomatic backing by the West, has not able to, you know, receive, I think, the criticism it deserves from the so-called international community.

Yemen, since March of 2015, has been ruthlessly bombed. The poorest Arab country is being destroyed by the richest Arab country. And nobody has been able to properly criticize the Saudis, because they have been essentially backed by the United States, rearmed by them, etc.

And the reason I put them together is that there is a international sensibility to support the Palestinian cause. Every time there’s a bombing in Gaza, there are demonstrations. There is heartfelt, I think, condemnation. But with this bombing in Yemen, there is virtual silence. You know, the very people that are out on the streets demanding that Israel stop bombing Gaza need to be out on the streets demanding that Saudi Arabia stop this murderous war against Yemen.

JUAN GONZÁLEZ: And I’d like to ask you: How do you see the failure of the Arab Spring even to consolidate any kind of progressive left movement in any of the countries we’ve been talking about? Why has it been so difficult?

And in that sense, we need to understand that this was less an Arab Spring and more the opening of an Arab civil war. You know, this civil war has been going on since the 1950s between Arab nationalist governments and the monarchies. And the weakness of the Arab nationalist governments, their own weakness, their own use of brutal means against the people, their own economic collapse, had weakened them to such a point that when the uprisings began, the monarchies took advantage of it, and they entered to—in a sense, I would say, to destroy the capacity of ordinary people to build their own society. So, it’s less an Arab Spring, more an Arab civil war, that the monarchies seem to have won.

Vijay Prashad on India’s Crackdown in Kashmir: “If This is Not an Occupation, What Else is It?”

NEXTVijay Prashad on India’s Crackdown in Kashmir: “If This is Not an Occupation, What Else is It?” 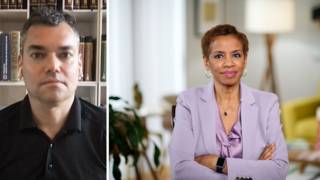