Republican presidential nominee Donald Trump spoke at the prestigious Detroit Economic Club Monday, where he laid out his economic vision. Trump vowed to slash corporate taxes and end the estate tax. He also said he would reject the Trans-Pacific Partnership and renegotiate trade deals including NAFTA, the North American Free Trade Agreement. This comes after Donald Trump announced his economic team, which includes 13 men, no women, several billionaires, an Oklahoma oil baron and one part-time professional poker player. For more on Donald Trump’s speech economic plan and his team, we speak with Matt Taibbi, an award-winning journalist with Rolling Stone magazine. He’s been closely following the Trump campaign. One of his recent pieces is headlined “A Republican Workers’ Party?”

StoryNov 09, 2016What Led to Trump’s Victory? From Racial Fear to Economic Populism

AMY GOODMAN: Well, let’s bring in Matt Taibbi. You’re an award-winning reporter for Rolling Stone. You watched the speech yesterday. First of all, why do you think Donald Trump chose Detroit and the Detroit Economic Club to deliver his economic message?

MATT TAIBBI: Well, I think that the central message that he’s trying to communicate, and he’s trying to make the defining issue of this campaign trade and free trade agreements. Detroit is probably the capital of disenfranchised America. It’s a symbol of what we used to be. It was an industrial powerhouse back in the day, that is now in virtual devastation because the manufacturing sector has been exported to other countries. And I think that’s—that was the key to his speech yesterday, as he was trying to say, “We were a great nation once, and look at what’s happened in the decades since we’ve entered into all these agreements. I, Donald Trump, am going to bring all these jobs back, and here’s how I’m going to do it.” And Detroit, of course, had significance in that respect.

AMY GOODMAN: Were you surprised by anything in the speech or the overall tone of the speech?

MATT TAIBBI: Well, you know, the beginning of the speech, I was a little bit surprised that he led with what sounded like warmed-over versions of previous Republican messages on taxes. You know, he had this new proposal to simplify the tax code and only have three tax rates. He wants to reduce the corporate tax rate to 15 percent. These kinds of proposals are not what won him the primary. What really—you know, apart from the racial aspect of his campaign, it was the message on trade that I think that really separated him from the other candidates, and he ended up emphasizing that much more later in the speech. I was a little surprised that he led with the tax aspect of it. But as it went on, the speech made more sense. And I think, you know, it did highlight a weakness in the Democratic position that can be exploited.

AMY GOODMAN: So, let’s talk about his tax proposal: three brackets—12 percent, 25 percent, 33 percent—0 percent for the poorest, and then cutting the cap on taxes for business to 15 percent.

MATT TAIBBI: Right. And also he says he’s going to repeal the carried-interest tax break, which makes him about the 5,000th politician who has proposed to do that. But that, of course, never happens. So—

AMY GOODMAN: But what about these?

MATT TAIBBI: Well, these—again, these are standard-issue Republican tax proposals, again, describing the Democrats as tax-and-spend politicians who raise taxes and choke small businesses. You know, this goes back to Steve Forbes and the flat-tax proposals. It’s the same thing that we’ve seen over and over again from Republicans in years past, which I thought was unusual because Trump’s whole message is “I’m different from these other people who have come before you. I am a completely new animal. I’m not the same kind of politician.” These proposals are very similar to proposals that we’ve seen from other sort of tea party Republicans in the past.

AMY GOODMAN: I want to talk about his economic team that he announced on Friday, including 13 men, no women, several billionaires, an Oklahoma oil baron and one part-time professional poker player, also one of the members, John Paulson, who made billions betting against the housing market in the lead-up to the 2008 crash. Matt Taibbi?

MATT TAIBBI: Yeah, John Paulson, to me, was a very surprising choice, because it completely undercuts his ability, I think, to make the accusation that Hillary Clinton is a shill for Wall Street, if one of your main economic advisers is John Paulson, who is sort of at the head of the table at the list of 2008 financial crisis villains. He was a central figure in the so-called Abacus affair. He was a hedge fund guy who assembled a kind of born-to-lose portfolio of mortgage instruments. And Goldman Sachs put it together, and a couple of European banks ended up getting bilked out of a couple of billion dollars thanks to this deal. Goldman got in a lot of trouble; Paulson did not. But nonetheless, he remained a symbol of the kind of cynical maneuvering that went on during the 2008 period. And for Trump to make him one of his leading advisers, it seems to me, makes it very difficult for him to level any criticisms at Hillary Clinton on the Wall Street score.

AMY GOODMAN: And the poker player?

MATT TAIBBI: Yeah, I don’t know much about the poker player, but I think it fits in with, you know, the personality of Donald Trump’s campaign. It’s almost like he’s assembling a cast of a reality TV show.

AMY GOODMAN: —what they call the Q. The Democratic convention took place in Philadelphia at the Wells Fargo Center.

AMY GOODMAN: Talk about the significance, I mean, maybe the symbol, of these two centers and these two companies and what they’ve done in this country.

MATT TAIBBI: I mean, it’s hilarious, right? It’s like American democracy, brought to you by the mortgage lending industry, you know, or supermarket banking in the case of Wells Fargo. You know, these—we forget that these presidential campaigns are essentially funded by a lot of the companies that are at the heart of a lot of the controversies that we’re supposedly talking about. I mean, if we’re talking about too-big-to-fail banks and what to do about them, well, Wells Fargo is at or near the top of the list of those companies, and yet it’s the Wells Fargo Center that the Democratic convention is held in. So, it’s—I think it’s interesting. I think we’re so used to hearing the corporate sponsorship of democracy that we don’t even pay attention anymore to these details.

AMY GOODMAN: Matt Taibbi, the piece you wrote, “A Republican Workers’ Party?” what did you mean?

MATT TAIBBI: Well, there’s a lot of talk now among some conservative intellectuals, people from like the National Review and Ross Douthat from The New York Times, that because of the reality of what happened in the Trump campaign, the Republican Party has to recognize that its constituency is really largely made up of working-class white people, and that they should readjust their policies accordingly to become a party that more naturally appeals to that constituency. And they’re talking about, you know, more aggressively embracing issues that are important to working-class people.

Now, of course, they’re never going to be a union-friendly party, but the fact that they even have this idea in their head, the fact that those voters have already defected to the Republican Party, the traditional explanation for that is that they’ve been sort of hoodwinked into voting against their own interest because they’ve been appealed—there have been cynical appeals on race and cultural issues. But I don’t think that’s the entire story. I think a lot of it does have to do with things like free trade deals, which have turned off some of these voters to the Democratic Party, and they are there for the taking. So, I guess what I was really trying to say is, the fact that they’re even having this discussion speaks to a huge failure on the part of the Democratic Party that they’ve even lost these voters to begin with.

AMY GOODMAN: You know, something interesting happened over the weekend with Tim Kaine, the vice-presidential nominee of the Democrats. He said he’ll oppose the TPP. You know, he has come out for it until as recently as a couple days before he was nominated by Hillary Clinton, angering many who are deeply concerned about the TPP, which is a deal that would encompass 12 Pacific Rim nations, including the U.S. Both Clinton and Trump now say they’re opposed to it, amidst this wave of public protest, to those who say it benefits corporations at the expense of health and environmental regulations. But this is Senator Kaine speaking Sunday on NBC.

SEN. TIM KAINE: Companies were given rights to enforce provisions, but the labor and environmental provisions could not be effectively enforced. That was never fixed. I’ve asked again and again to understand this piece of the TPP, and I’ve never gotten a good answer. We can’t have a deal that cannot be enforced.

AMY GOODMAN: I mean, it’s interesting that Senator Kaine is talking about these corporate counsels, he, again, one of 13 Democratic senators to vote to give President Obama the power to fast-track the TPP.

MATT TAIBBI: Right, but this goes back to NAFTA. This goes back to the original free trade agreements. They all had provisions in them that supposedly were going to provide for worker protections and to prevent things like signatory countries manipulating currencies or using their own protectionist measures to keep our products out, to prevent human rights abuses, human trafficking. I mean, Malaysia is in this deal. Of course, those things are never paid attention to in these deals. The only thing these deals really effectively do is they allow Western companies to move to these sort of unfree labor zones, where they get to exploit extremely low-paid, politically unfree workers. And that’s the real part of these deals. The part that supposedly provides any worker protections never materializes. 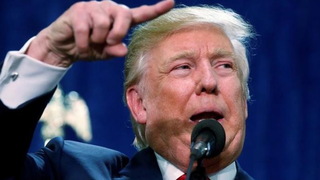