Our guest is longtime consumer advocate Ralph Nader, author of the groundbreaking 1965 book, “Unsafe at Any Speed,” which prompted Congress to enact the most sweeping auto safety law in U.S. history. This month marks the 50th anniversary of the signing of the National Traffic and Motor Vehicle Safety Act and the Highway Safety Act. President Lyndon Johnson signed the landmark legislation on September 9, 1966, greatly reducing the annual number of traffic fatalities. It set mandatory federal safety standards for vehicles and drivers, and established the National Highway Traffic Safety Administration. Nader went on to win a major settlement against General Motors for spying on him and trying to discredit him, and used the lawsuit’s proceeds to start the Center for the Study of Responsive Law. Now he has a new book out, titled “Breaking Through Power: It’s Easier Than We Think.” Next week he hosts a related conference in Washington, D.C.

AMY GOODMAN: Our guest for the hour is Ralph Nader, four-time former presidential candidate, consumer advocate. I want to talk about Trans-Pacific Partnership, or TPP. You fought against NAFTA—that was under President Clinton—now the TPP. Hillary Clinton initially supported the deal, but then spoke out against it when she was running in the Democratic primary against Bernie Sanders. Meanwhile, Donald Trump has lambasted trade deals. At the G20 summit earlier this month, President Obama tried to assure Asian countries that the U.S. will ratify the TPP despite mounting opposition.

PRESIDENT BARACK OBAMA: On the merits, it is smart for America to do it. And I have yet to hear a persuasive argument from the left or the right as to why we wouldn’t want to create a trade framework that raises labor standards, raises environmental standards, protects intellectual property, levels the playing field for U.S. businesses, brings down tariffs. It is indisputable that it would create a better deal for us than the status quo.

AMY GOODMAN: That was Ralph Nader—that was President Obama. Ralph Nader, talk about Donald Trump and Hillary Clinton’s stances on the TPP and what they mean.

RALPH NADER: Well, Trump says he’s against it, but you can’t believe anything he says. He’ll back down according to any opportunistic lever that he might want to hold, should he ever become president.

AMY GOODMAN: Do you think he has a chance?

RALPH NADER: I don’t think so, but it all depends on whether Bernie Sanders and Hillary Clinton start advancing authentic majoritarian issues before people and workers in this country.

AMY GOODMAN: And do you think—

RALPH NADER: Hillary Clinton is going quiet now, after she vanquished Bernie Sanders at the convention. She’s not speaking that much against the Trans-Pacific Partnership, which empties jobs from this country, raises drug prices and subordinates our own sovereignty in consumer, labor and environmental protection. Why? Because Barack Obama is going to make a major move in December, in the lame-duck session, and she doesn’t want to embarrass him. And so, she’s going quiet—you know, the usual reversal from rhetoric that the Clintons have been known for.

But why is there opposition really on the ground against TPP? Because of building civic skills. That’s what Lori Wallach has done with Global Trade Watch. That’s what our mobilization next Monday, Tuesday, Wednesday and Thursday in Washington—if you’ll let me just illustrate, the first day is—and these are from major civic leaders and doers—building civic skills and breaking through apathy. Wouldn’t people want to be in the auditorium for that?

Controlling what we own, shifting the power: People don’t realize that we own the greatest wealth in the country—the public lands, onshore, offshore, the public airwaves, trillions of dollars of government research and development, not to mention all kinds of intellectual property—but we don’t control it. And so, we are going to have a whole day, by the experts, on how you shift power, so that we control what we own, we have our own audience networks, we control the public lands, we deal with the things that our assets are involved in.

And the third deals with citizen action models, on September 28th.

And the fourth is the liberation movements from medieval England that are being crushed: the law of torts, the law of wrongful injury—if somebody wrongfully injures you with a medicine that’s hazardous or a defective car—and the law of contracts, which we’ve given up with the fine-print contracts. I don’t know anybody who hasn’t signed on the dotted line and given away their rights to these vendors.

AMY GOODMAN: Well, I want to talk about the theme of the conference—

AMY GOODMAN: —and also the fact that it is the 50th anniversary of your book Unsafe at Any Speed, which prompted Congress to enact the most sweeping auto safety law in U.S. history, 50th anniversary of the signing of the National Traffic and Motor Vehicle Safety Act and the Highway Safety Act. President Johnson signed the landmark legislation September 9, 1966, greatly reducing the annual number of traffic fatalities. It set mandatory federal safety standards for vehicles and drivers, established the National Highway Traffic Safety Administration. Our guest today, Ralph Nader, went on to win a major settlement against GM—that’s General Motors—for spying on him and trying to discredit him, and used the lawsuit’s proceeds to start the Center for the Study of Responsive Law. This is Ralph pointing out the safety flaws of General Motors’ Chevrolet Corvair.

CBC INTERVIEWER: Well, then, surely they did the right thing. They found out there was something was wrong with the car, and they fixed it.

RALPH NADER: Yes. The question is: Why did it take them four years to find out? This is my point. Either it’s sheer callousness or indifference, or they don’t bother to find out how their cars behave.

AMY GOODMAN: That was Ralph Nader back in the '60s. Ralph, what's happened in this 50 years?

RALPH NADER: What’s happened is, whenever we’ve advanced anything, it’s been less than 1 percent of the people around the country, in various congressional districts, supported by public opinion, whether it’s food safety, cleaner air, cleaner water, improved information flows, Freedom of Information law. People have got to realize. That’s why I call Breaking Through Power: It’s Easier Than We Think, and full of examples of where a few people started the ball rolling. Lois Gibbs, starting this group out of Love Canal, all over the country, against toxic contamination of people’s homes and neighborhoods, she had—she had no power at all, but she built power.

RALPH NADER: OK. Take a study by Johns Hopkins University Medical School last March and break it down. And in the period when these bombs are being discovered in trash cans in New York, 25 people have died in the New York area from mishaps in hospitals—hospital-induced infections, hospital malpractice, bad prescription of drugs. Totally, it’s 700 a day. This is a silent violence from corporate negligence, that includes air pollution, includes a lot of other hazards from negligent or criminal corporations. But silent violence doesn’t get on TV. It’s overt violence that gets on TV, which is more like street crime or violent attacks. So, but by far, the greatest number of Americans who are dying from preventable causes are from corporate misbehavior, whether it’s air pollution, water pollution, contaminated water, hospital hazards, you name it. And it’s all documented by groups like Harvard Medical School, Harvard School of Public Health, Johns Hopkins. But very little, if anything, is done about it, because it emanates from profit-making corporations that put money into political campaigns. But that doesn’t stop people from organizing in each congressional district. You can transform this country with Congress watchdog groups in each congressional district, representing majority opinions, a lot of left-right support for change in this country.

AMY GOODMAN: Let me ask you something. A lot of progressives who don’t want to go the major-party route—

RALPH NADER: Terrible. They’re against health and safety regulation. They’re against Medicare, full Medicare for all. That’s their very serious weak point. And they can’t back it up with many facts, unfortunately. But as you say, they’re against empire. They’re for civil liberties and, therefore, civil rights. But very incomplete party.

AMY GOODMAN: What would no corporate regulation look like?

RALPH NADER: Well, it would—you would repeal—they would actually get rid of the federal regulatory agencies. They want to get rid, some of them, of the IRS. I don’t know how they’re going to collect taxes. But they’re really estranged from reality in that way. But you take them for what they are. They are good on civil liberties, and they are good against empire. And they don’t like the bloated military budget. But they’re very incomplete. They haven’t figured out: How do you build all these public works, that they use every day, all these public services?

AMY GOODMAN: This is the 50th anniversary of Unsafe at Any Speed, of you launching the many different groups to push the country, the government, to make people safer. What do you think has been accomplished? What are you proudest of in this 50 years?

RALPH NADER: Well, you know, the air, water is cleaner. That’s one. Much safer in cars, where it’s one-fifth the risk of getting killed in a car by a given 100 million vehicle miles. We have the best Freedom of Information Act in the world, and we’ve got to use it more. We have civil rights laws that we don’t use enough of. We have the law of wrongful injury, that’s very underutilized. Most of the people who are wrongfully injured are not finding their way to a lawyer, against the perpetrator of their harm, so they can get compensated and deter other unsafe characteristics. So, there has been. But in the foreign and military area, it’s been very, very regressive. It’s been worse—more risky, more empire, more illegal actions under—

AMY GOODMAN: And what do you think that would change that, in 20 seconds?

RALPH NADER: Again, it’s the Congress. It’s Congress watchdog groups. And it’s doing me a favor, folks, by showing up at Constitution Hall and calling Ticketmaster for the next four days, 1-800-745-3000. Be there.

AMY GOODMAN: Well, Ralph Nader, longtime consumer advocate, corporate critic, four-time presidential candidate. His new book, Breaking Through Power: It’s Easier Than We Think He’ll be speaking and doing a book signing tonight at the Barnes & Noble in New York City at Union Square at 7:00 p.m. Then, from September 26 to September 29, the first two days at Carnegie Institution and then the 28th and 29th at Constitution Hall, will be the Breaking Through Power conference. 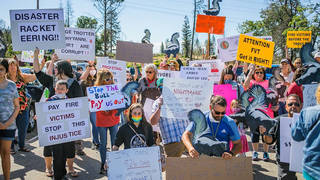