On Friday, NBC released a gut-wrenching cellphone video by Rakeyia Scott witnessing her husband, Keith Lamont Scott, being shot and killed by Charlotte-Mecklenburg police. “She was trying to do what police somehow couldn’t do, which was de-escalate the situation. … It’s really a remarkable act of courage and clearheadedness by his wife,” says Marc Lamont Hill, journalist, distinguished professor of African American studies at Morehouse College. He notes this is not the first time an African-American wife has had to watch state violence take place in real time against her spouse, while being ignored and disrespected by officers.

StoryMay 21, 2021Above the Law? Review of Police Killing of Andrew Brown Jr. Demanded After DA Calls It Justified

AMY GOODMAN: We begin today’s show in North Carolina, where Charlotte-Mecklenburg police have yielded to pressure and released two videos of last Tuesday’s fatal police shooting of 43-year-old African American Keith Lamont Scott. One video is from a police dashboard camera, the other from an officer’s body camera. Police say they also have more video that they have not released. The Scott family is asking the police to release all of the videos. The dashboard camera video shows Scott exiting his vehicle and taking steps backwards with his arms at his sides. Police fire four shots at Scott as he falls to the ground. The body camera video shows Scott on the ground after being shot by officer Brentley Vincent, who’s also African-American. Scott family attorney Justin Bamberg responded to the footage on Sunday.

JUSTIN BAMBERG: What we see when we look at this dash cam video is Mr. Scott steps out of the vehicle. He doesn’t appear to be acting aggressive towards any of the law enforcement officers on the scene. He doesn’t appear to be making gestures or motions as though he’s arguing with anybody. He doesn’t lunge at the officers. It appears he has his hands by his side. Again, there is no definitive evidence in this video as to whether or not there is an object in his hand, and, if there is, what that object is. That question still remains. But what we do know is that the moment Mr. Scott is shot, it appears as though he is not aggressively moving towards law enforcement. He’s actually doing the opposite: He’s passively stepping back.

AMY GOODMAN: The Charlotte police have also released pictures of a handgun as well as an ankle holster and a marijuana joint they say were in Scott’s possession. They did not say where they found the gun. North Carolina is an open-carry state.

This came after NBC News obtained gut-wrenching cellphone video capturing the shooting, filmed and narrated by Scott’s wife, Rakeyia Scott. NBC released the video on Friday. In it, Scott tells officers her husband is unarmed and suffers from a traumatic brain injury, or TBI.

RAKEYIA SCOTT: He doesn’t have a gun. He has a TBI.

RAKEYIA SCOTT: He’s not going to do anything to you guys. He just took his medicine.

POLICE OFFICER: Drop the gun! Let me get a [bleep] baton over here.

RAKEYIA SCOTT: Keith, don’t let them break the windows. Come on out the car!

RAKEYIA SCOTT: Keith, don’t do it.

POLICE OFFICER: Back up!

POLICE OFFICER: Is everybody good? Are you good?

RAKEYIA SCOTT: He don’t—ain’t nobody touch nobody, so they all good.

POLICE OFFICER: Back up!

AMY GOODMAN: That was cellphone video of the police killing of Keith Lamont Scott, filmed and narrated by his wife, Rakeyia Scott, in real time as he lay dying. Police claim they tased and then shot Scott because he was armed, but Scott’s family says he was not armed—except with a book in hand. They say Scott, the father of seven children, had been sitting in his car waiting to pick up his son after school.

Meanwhile, Sunday, hundreds continued to protest for a sixth straight day in Charlotte. Uniformed National Guard soldiers carrying rifles deployed outside a Carolina Panthers football game, while police in riot gear surrounded about a hundred demonstrators chanting “Black Lives Matter.” Inside, Carolina Panthers quarterback Cam Newton signaled his support during his pregame workout by wearing a T-shirt with a Martin Luther King Jr. quote: “Injustice anywhere is a threat to justice everywhere.” Also on Sunday evening, Charlotte Mayor Jennifer Roberts lifted the curfew that had been in place since Thursday.

For more, we’re joined here in studio by Marc Lamont Hill, journalist and distinguished professor of African American studies at Morehouse College. His book is titled Nobody: Casualties of America’s War on the Vulnerable, from Ferguson to Flint and Beyond.

AMY GOODMAN: A lot has happened since our show on Friday, these three videotapes released. We begin with Rakeyia Scott’s video, the shocking, horrifying video of a wife watching as her husband is shot by police. Respond to that.

MARC LAMONT HILL: Yeah, it’s heart-wrenching. And we saw the same thing with Philando Castile just a few months ago, where a wife has to watch state violence take place in—you know, in real time against their spouse. She was trying to explain to the police that he had a traumatic brain injury. She was saying that he didn’t have a weapon. She was trying to do what police somehow couldn’t do, which was de-escalate the situation. She was trying to offer information that would get them to back off. At the same time, she was trying to encourage her husband to stay where he was supposed to be, in the car, so that he wouldn’t be as vulnerable to state violence. It’s really a remarkable act of courage and clearheadedness by his wife. At the same time, police seemed to be completely unresponsive to her instruction, to her insights. It was really disappointing.

AMY GOODMAN: They wouldn’t even let her near him as he lay dying and they are handcuffing him.

MARC LAMONT HILL: Handcuffing him, yeah. That was the other part of this. You know, again, we watch this over and over again—and not just at the current moment, but throughout history—black women, in particular, watching their spouses killed at the hands of the state and then being thoroughly disrespected and marginalized even in real time. She couldn’t go over and attend to him. She couldn’t talk to him. They’re more worried about telling her to stay away. Same thing happened with Philando Castile: “Stay away. Don’t film. Don’t come near us.” That kind of attitude and that kind of sensibility makes it difficult to believe that the police were invested in de-escalation at any point that day. 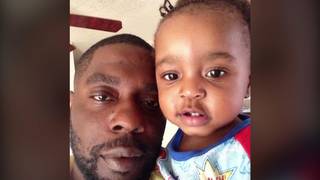 Above the Law? Review of Police Killing of Andrew Brown Jr. Demanded After DA Calls It Justified