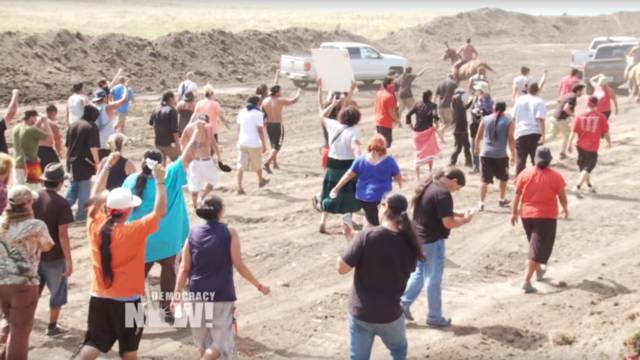 In a dramatic series of moves late Friday afternoon, a federal judge rejected the Standing Rock Sioux Tribe’s request for an injunction against the U.S. government over the Dakota Access pipeline. Then the Army, Department of Justice and Department of the Interior responded with an announcement that the Army Corps will not issue permits for Dakota Access to drill under the Missouri River until the Army Corps reconsiders its previously issued permits:

“The Army will not authorize constructing the Dakota Access pipeline on Corps land bordering or under Lake Oahe until it can determine whether it will need to reconsider any of its previous decisions regarding the Lake Oahe site under the National Environmental Policy Act (NEPA) or other federal laws.  Therefore, construction of the pipeline on Army Corps land bordering or under Lake Oahe will not go forward at this time. “

“We appreciate the District Court’s opinion on the U.S. Army Corps of Engineers’ compliance with the National Historic Preservation Act.  However, important issues raised by the Standing Rock Sioux Tribe and other tribal nations and their members regarding the Dakota Access pipeline specifically, and pipeline-related decision-making generally, remain.”

In a statement posted online, the Standing Rock Sioux Tribe summarized the actions taken by the agencies and added that they “also set the stage for a nationwide reform, establishing consultation with tribes regarding the need for meaningful tribal input for all pipeline projects in the future. This federal statement is a game changer for the Tribe and we are acting immediately on our legal options, including filing an appeal and a temporary injunction to force DAPL to stop construction.”

The Standing Rock Sioux Tribe’s lawsuit challenges the Army Corps of Engineers’ decision to issue permits for the pipeline, arguing it violates the National Historic Preservation Act. This comes as over 1,000 people representing more than 100 Native American tribes are gathered along the Cannonball River by the Standing Rock Sioux Reservation to resist the pipeline’s construction. It’s been described as the largest unification of Native American tribes in decades.

Red Warrior Camp posted online: “Nothing has changed for the 1000s of people who came from 1000s of miles on prayers & fumes to stop this pipeline. Stay peaceful without backing down.”

If completed, the $3.8 billion pipeline would carry about 500,000 barrels of crude per day from North Dakota’s Bakken oilfield to Illinois. The project has faced months of resistance from the Standing Rock Sioux Tribe and members of more than 100 other tribes from across the U.S. and Canada.