We get response from fellow Chicagoan, Congressmember Luis Gutiérrez, on key achievements highlighted by President Obama during his farewell presidential address, which took place at Chicago’s McCormick Place convention center Tuesday night. “Healthcare is important. It’s a basic fundamental human right. It’s not a political right. … There are 20 more million people covered by healthcare. Ironically, large numbers of rural white Americans that had no access to healthcare were the primary beneficiaries of Obamacare. So, I’m excited,” Gutiérrez says. “Could we have done more? Could we have reformed our immigration system? Absolutely.”

AMY GOODMAN: This is Democracy Now!, democracynow.org, The War and Peace Report. I’m Amy Goodman, with Juan González, as we talk about what happened on Tuesday night, President Obama’s farewell address.

JUAN GONZÁLEZ: Yes, he gave it at Chicago’s McCormick Place convention center. One of the issues he addressed was voting rights.

PRESIDENT BARACK OBAMA: Which brings me to my final point. Our democracy—our democracy is threatened whenever we take it for granted. All of us, regardless of party, should be throwing ourselves into the task of rebuilding our democratic institutions. When voting rates in America are some of the lowest among advanced democracies, we should be making it easier, not harder, to vote. When—when trust in our institutions is low, we should reduce the corrosive influence of money in our politics and insist on the principles of transparency and ethics in public service. When Congress is dysfunctional, we should draw our congressional districts to encourage politicians to cater to common sense and not rigid extremes.

JUAN GONZÁLEZ: That was President Obama in his farewell speech last night. I wanted to ask Congressman Gutiérrez a couple of things. At the end of his speech, he referred back to the theme of his original race, “Yes, we can,” ”Sí, se puede.” And he ended, saying, “Yes, we did.” I’m wondering, your reflections now on what “Yes, we did” meant to you. What was accomplished? What wasn’t accomplished? The issue of DACA, that you—of the DACA youth and also of Oscar López Rivera, that you have been raising repeatedly?

REP. LUIS GUTIÉRREZ: Look, today we’re going to get together at noon in front of the White House. I’m so thankful to Bishop Desmond Tutu, to former President Jimmy Carter, to the mayor of San Juan, to the mayor of New York, to so many religious leaders, archbishops and cardinals and religious leaders, demanding the release of Oscar López Rivera, 35 years in jail for loving his country and wanting the independence of Puerto Rico. And so, we’re petitioning the president. And I’m hopeful.

Here’s what I think. I think, in the end, he began—he began with a huge crisis. Right? And that really tied his hands. There were—remember, in any given month, when he was first elected, a million jobs disappeared. And so, we had that emerging crisis, economic crisis. And look, healthcare is important. It’s a basic fundamental human right. It’s not a political right. It’s a human right. It shouldn’t be to the political wins in this country. There are 20 more million people covered by healthcare. Ironically—ironically, large numbers of rural white Americans that had no access to healthcare were the primary beneficiaries of the—of Obamacare. So, I’m excited.

Could we have done more? Could we have reformed our immigration system? Absolutely. We challenged this president. And in the end, he responded to the challenge by taking the kinds of executive actions that freed 750,000 DREAMers, that took all the way to the Supreme Court his subsequent executive orders that were challenged by the Republican Party. And so, when I look at immigration, I see a president that started one place and ended in a very good place when it came to our immigration policy. So, I’m going to say, “President Barack Obama, we had a lot of fighting with you. We had a lot of challenging. But in the end, you turned around, you spoke to us, you listened, and you acted.”

And could I—would I have wanted it to have been done earlier? Absolutely. But I think between fixing our economy, getting us back on the right track, healthcare, let’s remember—and, you know, Donald Trump will say, “Well, I saved 500 jobs here, or there’s a thousand jobs there.” What about the millions of jobs that were maintained in America with GM and Chrysler when we intervened? That’s Barack Obama. That’s the Democrats, Dodd-Frank and making sure that we do not put the future of people’s pensions at risk, the future of our economy at risk, because of the greed on Wall Street. I think there are many wonderful things. And look, in the end—in the end, I have a grandson that’s 13 years old. And when he went—he got to see the president of the United States, so I know it’s very [inaudible]. He got to see, and he said—to President Obama, he said, “Thank you, Mr. President, because now my cousins and my aunts and uncles can stay,” when he issued those broader executive authority. I’m happy to see a young Latino man being able to speak to a grown black man that is president of the United States.

AMY GOODMAN: How many times were you arrested during the Obama administration, protesting around— 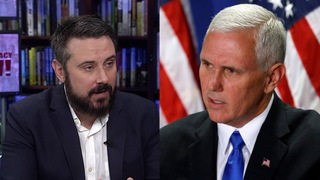