We look at one of the most controversial policies President Obama passes on to Donald Trump: family detention. Since 2014, thousands of Central American women and children seeking asylum have been held in private jails. Despite complaints of medical neglect and poor oversight, the Obama administration resisted calls to end the practice. Now, advocates worry Trump could expand it, with even less oversight. Democracy Now! correspondent Renée Feltz reports from the Texas-Mexico border.

JUAN GONZÁLEZ: As immigration protests erupt in 50 cities across the country, we end today’s show looking at one of the most controversial policies President Obama passes on to Donald Trump: family detention. Since 2014, thousands of Central American women and children seeking asylum have been held in private jails.

AMY GOODMAN: Despite complaints of medical neglect and poor oversight, the Obama administration resisted calls to end the practice. Now advocates worry Trump could expand it with even less oversight. We turn now to Democracy Now! correspondent Renée Feltz with this report.

RENÉE FELTZ: The Obama administration says its policy of detaining Central American families seeking asylum is meant to deter others from following. But thousands of women and children continue to come. In Texas, agents have erected large tents to hold them, near El Paso, in a small town called Donna. I tried to film the tent in Donna, next to a busy border crossing. The security guard didn’t make it easy.

SECURITY GUARD: No, they don’t want nobody here. It has to be across the street

RENÉE FELTZ: Across the street?

The tent can hold a thousand people. It’s surrounded by a chain-link fence topped with barbed wire, and Border Patrol jeeps are parked outside. Immigration lawyer Carlos García took a tour in December.

CARLOS GARCÍA: Basically, you walk in, and it’s tents. It’s like a tent city. And inside, they have chain-link fence, cages. They look like cages. And they call them temporary facilities, but they’re detention facilities nonetheless, where, you know, babies and children and parents are sleeping, are being jailed, while the government figures out what they’re going to do with them.

RENÉE FELTZ: This is the first step in family detention. Customs and Border Patrol has 72 hours to interview the so-called family units, collect their biometric data and send them to private prisons near San Antonio. In some cases, it gives them a notice to appear in immigration court and lets them go. Agents coordinate the drop-offs at the McAllen bus station with the nearby Sacred Heart Catholic Church.

SISTER NORMA PIMENTEL: Here in the community of the Rio Grande Valley, we started to see the families in very devastating conditions. They needed to regain their dignity, because they’ve been through very difficult times. As soon as they arrive, we welcome them. You know, we clap our hands and say “bienvenidos.” And it’s a way of letting them know that we’re here for them. We immediately will take them for their first stop, where they sit down and we will register them, at least take down their name, where they’re from, where they’re going and what time their bus leaves. They get a bag with all the items they need to go shower and get cleaned up. We then move them to the section where they go and sit down at the table, so they have something to eat, while the volunteers will look for them some clothing. Once they finish eating and have all the clothing collected, they go off and to the showers, take a shower, get cleaned up. After that, they come and ask for a phone call, so they can call their family and tell them what time they’re arriving.

RENÉE FELTZ: Even though women and children who are released can reunite with relatives, court records show few find a lawyer and remain free. Asylum claims in such cases are rejected 90 percent of the time. Almost half are ordered deported at their first hearing and wind up in detention.

MANOJ GOVINDAIAH: I think everyone—advocates, the administration—I think everyone sort of thought this was a temporary thing, and we would nip this in the bud.

RENÉE FELTZ: Manoj Govindaiah is director of family detention services at the Refugee and Immigrant Center for Education and Legal Services.

MANOJ GOVINDAIAH: And unfortunately, it looks like it’s going to turn into some kind of protracted thing that’s here to stay, similar to adult detention, similar to detention of unaccompanied minors. It looks like there is now this new space carved in the detention world for moms and kids.

RENÉE FELTZ: Immigration and Customs Enforcement has occupied that space with two family detention centers run by private prison companies. It has a contract with GEO Group in Karnes County to run a thousand-bed facility. And it recently extended its contract with CoreCivic in the town of Dilley to hold another 2,400 mothers and children until 2021 in a facility next to a state prison.

JOSÉ ASUNCIÓN: There’s 600 employees at the CoreCivic detention center. And this was a big deal when they came to pitch it to the city. “Oh, we’re going to bring 600 jobs.” And even still the city touts that number. Well, it’s great, except that most of those jobs didn’t go to people from the area.

RENÉE FELTZ: In October, ICE renegotiated CoreCivic’s contract from $20 million to $13 million. And the company passed the cut onto employees.

JOSÉ ASUNCIÓN: So, a resident supervisor that was making 24 bucks an hour was making $16 an hour after that contract renegotiation. They had a number of people quit.

RENÉE FELTZ: Not long after CoreCivic cut wages, more than 400 mothers and children were suddenly released from Dilley. This was about the same time a Texas judge refused to issue child care licenses to private prison operators. Immigration authorities claimed the mass release was part of normal operations, but it may have been linked to one or both of these events. The average stay in family detention is now 17 days before a family is deported or released. Those who are released while their asylum claims are pending in court are again dropped off at the bus station, this time in nearby San Antonio. Those not ready to travel can find housing and a good meal at a shelter RAICES operates.

YANIRA LÓPEZ LUCAS: [translated] My name is Yanira. I’m from Guatemala. And I work here in Casa RAICES. This is a kitchen. We have a fridge. We have this stove, where we prepare food for all the women that are coming in. It truly is very important, because, on the way here, a person doesn’t eat the way that a person really should be eating. On top of that, in detention centers, the food is a total disaster. I understand, because I went through that same thing and I know what the food in those detention centers is like.

RENÉE FELTZ: A Department of Homeland Security Advisory Committee on Family Residential Centers has urged the Obama administration to discontinue the general use of family detention. It noted allegations of medical neglect in retaliation against mothers who protested inadequate care. At Casa RAICES, I met a woman named Erica from Honduras who experienced just that. She was detained in Dilley after she requested asylum with her two young children. It was at CoreCivic’s detention center where her then-14-month-old daughter got sick.

ERICA: [translated] The third day in Dilley, she started having fevers and coughing. Took her to the medic, the hospital there. They told me there was nothing wrong with her. I cried and told the nurse that, please, to give me some medicine, because my daughter was having such a high fever. Even after we finished the treatment, my daughter was still having very high fevers and coughing a lot. Nothing was better. I wanted to sign my deportation, because I wanted to get out of there. And I told the other moms there, but they told me to not do that.

RENÉE FELTZ: Erica says at one point the medical staff gave her daughter VapoRub when she had a hard time breathing. When she was released to Casa RAICES, they immediately took her to the emergency room.

ERICA: [translated] She was hospitalized for seven days. A doctor told me that she was glad that I brought the child, because she could have died. She had pneumonia, and she had an infection in her right lung.

RENÉE FELTZ: Advocates worry Erica’s experience could become more common under Trump, who has vowed to crack down on immigrants, and surrounded himself with policymakers who oppose oversight and regulation of private industry. For now, she is one of many voices calling for the Obama administration to end family detention before he leaves office.

ERICA: [translated] The father of my children had already been here before. And he used to say that the children were treated much better and that there was a lot of medical attention. But truly, he was wrong.

AMY GOODMAN: And that does it for today’s show. Tune in for our special live coverage of the presidential inauguration on Friday, January 20th, from 8:00 a.m. to 3:00 p.m. Eastern. We’ll carry the official proceedings live, as well as analysis and voices from the streets. On Saturday, January 21st, we’ll broadcast live from the Women’s March on Washington from 10:00 a.m. to 3:00 p.m. Eastern, bringing you voices from the stage and the march. Go to democracynow.org for details. 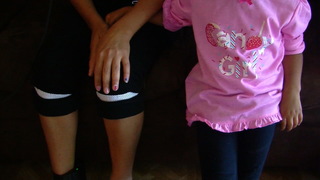