“Women Will Die Because of This”: Planned Parenthood on Trump Signing Anti-Abortion Global Gag Rule

Just two days after millions of people poured into the streets of Washington, D.C., and cities around the world for the historic Women’s March on Washington, President Trump has reinstated the controversial “global gag rule,” which women’s rights advocates fear will increase unsafe abortions around the world. The policy originated in the Reagan era and bans U.S. funding for any international healthcare organizations that perform abortions or advocate for the legalization of abortion or even mention it, even if those activities are funded by non-U.S. money. Trump signed the order surrounded by seven other men. We speak to Planned Parenthood’s Dawn Laguens.

AMY GOODMAN: Just two days after millions of people poured into the streets of Washington, D.C., and cities around the world for the historic Women’s March on Washington, President Trump has reinstated the controversial global gag rule, which women’s rights advocates fear will increase unsafe abortions around the world. The policy originated during the Reagan era, and it bans U.S. funding for any international healthcare organization that performs abortion or advocates for the legalization of abortion or even mentions abortion, even if those activities are funded by non-U.S. money. Trump signed the order surrounded by seven other men. White House Press Secretary Sean Spicer was questioned about the move on Monday.

REPORTER: Of all the policy or actions that the president could have taken today, he chose to reinstate the Mexico City Policy. What message is he sending here? Does he see the elimination, reduction of abortions as an American value? And also, here at home, can pro-life Americans expect him to put his signature on legislation that will defund Planned Parenthood?

PRESS SECRETARY SEAN SPICER: Well, I think the president, it’s no secret, has made himself—made it very clear that he’s a pro-life president. He wants to stand up for all Americans, including the unborn. And I think the reinstatement of this policy is not just something that echoes that value, but respects taxpayer funding, as well, and ensures that we’re standing up not just for life, for life of the unborn, but for also taxpayer funds that are being spent overseas to perform an action that is contrary to the values of this president, and, I think, continue to further illustrate, not just to the folks here in this country, but around the world, of what a value we place on life.

AMY GOODMAN: The global gag rule is seen by many as a major global barrier to access to crucial women’s health services. In this animated video, the president of Planned Parenthood, Cecile Richards, explains how the policy works.

CECILE RICHARDS: This rule, also known as the Mexico City Policy, was first put in place three decades ago by President Reagan. Current U.S. policy already restricts organizations from using U.S. funds to pay for abortions. But the gag rule goes even further, by dictating what they can do with their own money. This means that if a clinic receives even $1 of U.S. foreign assistance for family planning, its doctors and nurses are limited in what they can do to help their patients. They can’t counsel a woman on the full range of health options legally available to her, refer her to another provider for specialized care or even give her a pamphlet with medically accurate information. That’s why we call it the global gag rule, because it prevents doctors from talking to their patients and providing services that are legal in their own countries—and in the U.S.—and it keeps people from participating in the democratic process of their own countries. This means clinics closing their doors, more unintended pregnancies and more unsafe abortion

AMY GOODMAN: The significance of this gag rule? And, I mean, do you see it as retaliation for what happened two days before? You have this historic Women’s March. President Trump is obsessed with numbers. The march looks like it was three times larger than his crowd for his inauguration, which seems to be his top concern right now. Is this?

DAWN LAGUENS: Well, I don’t know if it’s retaliation, but what I know is it is the targeting of the most vulnerable women in the whole world with a policy that is going to mean women will die because of this action. And it is outrageous, contrasted with the march, with the voices of women around the world saying that they expected more.

AMY GOODMAN: So, explain exactly how this works.

DAWN LAGUENS: So, what happens is—and this is a more expansive version, by the way, of the global gag rule, worse than anything that happened under Ronald Reagan, because they have extended it to apply not just to family planning funds, but $8 billion in global health aid. And what it means is, any organization that takes one of those dollars to do Zika prevention, to do HIV/AIDS counseling, to do family planning work, if they speak honestly to their clients, to their patients, about the full range of reproductive health options that are available, if they refer or advocate, or even, as you said, mention abortion, they will lose that funding and not be able to provide those other services, because, unfortunately, already abortion dollars—dollars cannot pay for abortion internationally, U.S. aid dollars.

AMY GOODMAN: So, he asked, “So, why do they bother providing abortion?”

DAWN LAGUENS: Well, abortion is part of the full range of women’s healthcare. And it’s a legal right. I think one of the things that Sean Spicer forgets when he says that they’re going to export American values, an American value is access to our constitutional rights, and abortion is one of them.

DAWN LAGUENS: Right. Principled organizations around the world will be forced to make a choice as to whether they accept those family planning dollars that they use to provide all kinds of family planning services, if they also are going to stay true to their mission of serving women with the full range of reproductive health services, or at least informing them. I mean, in many cases, this is just about if a woman is going to ask about an abortion, that they can’t refer them to someone who could provide a safe, legal abortion, but have to let them be out in the world trying to figure this out on their own. And it really is insulting to women, their intelligence and their freedom.

AMY GOODMAN: Does this go into effect immediately?

DAWN LAGUENS: Organizations are going to have to immediately decide whether they are going to sign and abide by this gag rule. Organizations like Save the Children and CARE oppose these kinds of regulations, oppose global gag rules, because they know that it hurts women. I wanted to remind people that when Barack Obama took office eight years ago and reversed the global gag rule, there were some 70,000 women a year dying from these policies being in place. That has dropped down to 20,000 now at the end of eight years. And we’re just very fearful that this is going to cause that number, that loss of life, maternal mortality, to skyrocket.

AMY GOODMAN: How will this affect Planned Parenthood in particular? You have your national series of clinics around the country, network of clinics. What about internationally?

DAWN LAGUENS: We do support a lot of work internationally, and we don’t take U.S. aid dollars internationally. But, of course, we’re concerned about the rights and health of women across this country. And some of the same people who advocate for these policies in the global gag rule also are the people who are advocating for taking away the rights of women in America. And so, we’re very concerned. And as you know, these are the same people who are trying to defund Planned Parenthood and take away access to preventive health services like family planning for millions of women in this country.

AMY GOODMAN: I want to ask you about the confirmation hearing that’s going to happen today for Tom Price, the second one. Last week, Donald Trump’s pick for the head of Health and Human Services, Georgia Congressmember Tom Price, appeared before the Senate Committee on Health, Education, Labor and Pensions for his hearing. Price is the chair of the House Budget Committee, a member of the Tea Party Caucus, one of the leading opponents of President Obama’s Affordable Care Act. He opposes abortion, has voted to cut all federal funding for Planned Parenthood, also supports privatizing Medicare. Democratic Senator Patty Murray of Washington said women are deeply concerned about Price’s nomination. This is Senator Murray questioning Price at last week’s hearing.

SEN. PATTY MURRAY: Women are really deeply concerned about the impact this election could have on their access to healthcare that they need. I have heard from many of them. And according to Planned Parenthood, demand for IUDs, which is a form of long-lasting contraception, is up 900 percent since the election. So I want to ask you: Will you commit to ensuring all 18 FDA-approved methods of contraception continue to be covered, so that women do not have to go back to paying extra costs for birth control?

REP. TOM PRICE: What I will commit to and assure is that women and all Americans need to know that we believe strongly that every single American ought to have access to the kind of coverage and care that they desire and want.

DAWN LAGUENS: Well, very concerned, obviously, about the history of Tom Price, as you have mentioned—65 times voted against the Affordable Care Act, has been a leader in the defunding and fight against Planned Parenthood services, and, as you heard him, will not commit to protecting the preventive health services benefit. And we hear a lot about the 20 million people who may lose insurance coverage. We don’t hear very much about the 55 million women who are getting no-copay birth control today, saving $1.4 billion into their family budgets every year, that they are threatening. And this is going to have a big impact. I call it the mom tax. Right? They’re just going to shift $1.4 billion back onto the ledgers of families in this country. And that’s going to be a big shock to people. And it’s going to mean a lot of people don’t get the care and coverage and the birth control option that would work best for them.

AMY GOODMAN: Dawn Laguens, I want to thank you for being with us, executive vice president of Planned Parenthood Federation of America and the Planned Parenthood Action Fund. We’re here in Park City, Utah, at the Sundance Film Festival. When we come back, we’re going to look the first news conference of the new press secretary, Sean Spicer. Stay with us. 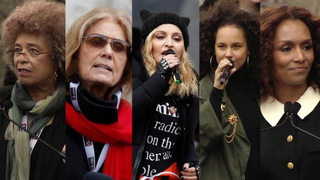