AMY GOODMAN: I want to go to Josh Fox in New York City. As we were getting this news here in Utah, you were already tweeting and putting on Facebook an action. Can you describe what happened last night in New York?

JOSH FOX: [inaudible] Donald Trump was going to be pushing the Dakota Access pipeline through this presidential memorandum at 11:00 in the morning. By 12:00, there was a Facebook event up. By, I think, 2:00 in the afternoon, there were 2,000 people that said they were going to come. We had, we think, between 2,000 and 5,000 people last night in New York City in the freezing rain. We did a rally for about an hour at Columbus Circle, and then we marched towards Trump Tower, only to find that the entire blocks around Trump Tower in New York City in the center of Manhattan have been barricaded, so that we couldn’t get anywhere near Trump Tower. I don’t know how that’s legal. The march, undeterred, however, just started to go around the barricades and ended up in Times Square. It was a very, very powerful moment. And it shows solidarity, and I think it shows just how much people really care about this issue, about Standing Rock, about indigenous sovereignty, about clean water. So, I’m very proud of New Yorkers who came out and for such a long period of time in the freezing rain to stand up for clean water and to fight these executive actions that many believe are illegal and unenforceable and will cause lawsuits.

AMY GOODMAN: Explain the difference between a presidential memorandum—there’s a lot of confusion right now—

And, yes, there are three things, I think, that the consensus of this movement—and although, of course, there is a debate about what to do next—are recommending. One is, definitely participate in that the EIS process, which is underway. You put in public comments. Those public comments really matter. The second is, obviously, divest from the banks. We talked about Chase. We know about Wells Fargo and TD and other banks that are invested in the Dakota Access pipeline. And there is a call on the ground from Chase Iron Eyes and the 500 water protectors that are still at Standing Rock, that if people are able-bodied and peaceful, to come out and continue that watch and to, if necessary, put bodies in front of the line.

So I think what’s happening with Donald Trump here is he’s putting forward a kind of weak presidential action that looks strong, so it looks like he’s pushing people into a corner. But the truth of the matter is, there is a process of the rule of law here. And, of course, what everybody is worried about is that Donald Trump doesn’t respect the rule of law. What everybody is worried about is that he’s just going to give the green light to Energy Transfer Partners and say, “Go ahead and drill.” And that’s why I think a lot of people are saying we still need water protectors holding the line. And, of course, what really worries he and a lot of other people across this nation is that this is the beginning of a trend to continue to push pipelines, Keystone XL. There are a myriad of pipelines that are being proposed for across the United States. There are 300 fracked gas power plants that are being proposed for across the United States, which started under the Obama administration. All of those need pipelines.

So we have communities all across this nation that are up in arms right now, that are getting on the front line, that are saying, “No, we’re not going to do this.” And this action from Donald Trump, I think, has really spurred people towards action. And that’s one of the things that I’m very grateful for. I think this movement is unbelievable. I’ve never seen anything quite like it, thousands of people organizing so quickly.

“I’m Afraid They Are Out to Kill”: Water Protectors Testify to Police Violence at Standing Rock

NEXT“I’m Afraid They Are Out to Kill”: Water Protectors Testify to Police Violence at Standing Rock 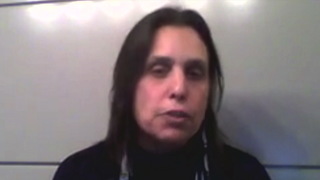