On Tuesday, Donald Trump signed a pair of presidential memorandums to revive the Keystone XL and Dakota Access oil pipelines—two major projects halted by the Obama administration following massive resistance from indigenous and environmental groups. Native American groups and their supporters have long opposed the Dakota Access pipeline being laid a mile from the Standing Rock Sioux Reservation and beneath the tribe’s primary source of drinking water. The Standing Rock Sioux Tribe tweeted, “Trump’s executive order on #DAPL violates the law and tribal treaties. We will be taking legal action.” The tribe added, “Creating a second Flint does not make America great again.” We speak to Winona LaDuke, Native American activist and executive director of the group Honor the Earth. She lives and works on the White Earth Reservation in northern Minnesota.

AMY GOODMAN: Trump’s move sparked a number of emergency protests last night in Washington, New York, Los Angeles, San Francisco, Seattle, Philadelphia and other cities. Native American groups and their supporters have long opposed the Dakota Access pipeline being laid a mile from the Standing Rock Sioux Reservation in North Dakota and beneath the tribe’s primary source of drinking water. The Standing Rock Sioux Tribe tweeted, “Trump’s executive order on #DAPL–violates the law and tribal treaties. We will be taking legal action.” The tribe added, “Creating a second Flint does not make America great again,” unquote.

The Dakota Access project would carry up to 570,000 barrels of oil a day from North Dakota through South Dakota, Iowa and then Illinois. The Keystone pipeline would transport 830,000 barrels of crude every day from Alberta’s oil sands to refineries on the U.S. Gulf Coast for export. Trump’s move comes as scientists with both NASA and NOAA, the National Oceanic and Atmospheric Administration, confirmed 2016 was the hottest year on record, topping the previous record set in 2015, which topped the previous record set in 2014.

Well, for more, we’re joined by three guests. From North Dakota, Winona LaDuke is with us, Native American activist, executive director of the group Honor the Earth. She lives and works on the White Earth Reservation in northern Minnesota.

Here in Park City, Utah, Bobbi Jean Three Legs is with us, from Wakpala, South Dakota, member of the Standing Rock Nation. Last year, she and [Joseph] White Eyes led a group of youth water runners on a 2,000-mile trek from Sacred Stone Camp in Cannon Ball, North Dakota, to Washington, D.C., where they delivered a petition against the Dakota Access pipeline to the Army Corps of Engineers headquarters.

New York, Josh Fox is joining us, director of Gasland and How to Let Go of the World and Love All the Things Climate Can’t Change, one of the leaders of a protest last night outside Trump’s headquarters in New York City that drew thousands of people, only after a few hours’ notice.

We want to welcome you all to Democracy Now! We’re going first to Bismarck, North Dakota. Winona LaDuke, can you respond to the executive action, the presidential memorandum, issued by President [Trump] yesterday?

WINONA LADUKE: Well, to be honest, it is pretty much a declaration of war against us all out here, not just against Native people, but against anybody who wants to drink. And across the board, what the guy is doing looks like that to us—the predator-in-chief. You know, as far as I can, you know, review his thinking on this, aside from being insane, the fact is, is that, you know, infrastructure is needed in this country. I’m totally going to agree on that. We got a D in infrastructure in this country. We’ve got breaking pipelines all over the country. We’ve go water mains that don’t work. That’s where it needs to go, not into massive infrastructure projects that are for oil companies, and not for people. And he definitely wants to shove those pipelines down our throats, whether we’re out here in North Dakota or, you know, wherever we are. That’s what his intention is.

AMY GOODMAN: So, what is happening? You have—you were actually just here, a part of a protest outside of Chase in—here in Park City, but then you went directly to North Dakota. What is the response there?

WINONA LADUKE: Well, our board and, you know, most people up here are very concerned about what is going to happen. Over the past few weeks, we’ve already had a lot of people hit and injured by Morton County. And we understand the National Guard is already in there, you know, hurting some of our people. I’ve had a lot of injuries. And, you know, so it has continued. And we assume that they’re going to work on just shoving the rest of it through, over our rights and over a lot of people.

You know, and I just want to say that, like, in the bigger picture of things, if you invested the money that you’re going to invest in Keystone, you know, they say there’s 300,000 total jobs more, five times as many jobs, if you fix the infrastructure in cities with those union workers and with that steel. You know, the same thing is true with Dakota Access pipeline.

You know, the fact is, is that they’re trying to shove a pipeline through. And I’m not sure where the oil is coming from. You know, I’m sitting out here in Bismarck. This is what a holding cell probably looks like in Bismarck. I happen to be not in a holding cell today, but maybe soon. You know, in any case, we’re looking—we’re looking at this out here, and there is an 85 percent drop in drilling rigs in the Bakken. The oil is not high enough, you know, so they dropped it. And there’s only 900,000 barrels of oil in the Bakken coming out right now. Lynn Helms is projecting that there will be 900,000 barrels of oil a day coming out of the Bakken in 2019. So I don’t know where 570,000 barrels of oil coming out of the Bakken is going to come from, because you can’t just fill oil where there’s no oil in there. All the oil that’s going out is busted up here in the Bakken. And so, he has some fantasy about getting all his pipeline projects through, but there’s not oil for it.

You know, the fact is, is that the person who’s going to benefit most from Keystone is Rex Tillerson, the new secretary of state. That guy is going to be, you know, really busy on all of that. That guy is—you know, Exxon has bet the farm on the tar sands, and they have to get production up there. And I don’t know how they’re going to do that, because there’s not even enough production to fill the Keystone XL coming out of the tar sands now.

So, you know, it’s a complicated mess. And I feel that he has declared war on us out here. And, you know, we are people who have the worst infrastructure in the country on our reservations. We don’t have adequate infrastructure. We don’t have adequate drinking water facilities. We’ve got hospitals that were built in the '50s and ’60s. You've got people with substandard housing. You’ve got energy infrastructure that doesn’t work. And so, all of that would be energy security for all Americans. And instead what we’re getting is a pipeline that he wants to shove down our throat. Definitely a declaration of war on all of us by the predator-in-chief. 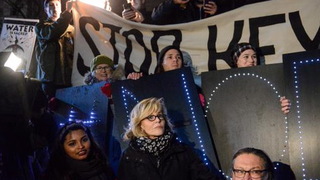