“This is Not a Coup, But It’s Not Normal”: Trump Picks 3 Generals for Top Foreign Policy Posts

As President-elect Donald Trump’s key nominees for Cabinet and Cabinet-level positions include three generals, we get response from Gordon Adams, professor emeritus at American University’s School of International Service, who recently wrote in The New York Times about “Donald Trump’s Military Government.” Confirmation hearings for retired Marine General John Kelly as homeland security secretary begin Wednesday. The hearing for retired General James “Mad Dog” Mattis as defense secretary has yet to be scheduled. As national security adviser, retired Army Lieutenant General Michael Flynn does not have to be confirmed by the Senate.

AMY GOODMAN: Confirmation hearings for President-elect Donald Trump’s key Cabinet nominees begin next week. One of the first to go before Congress will be Trump’s pick for homeland security secretary, retired Marine General John Kelly. Kelly was formerly the head of United States Southern Command, where he oversaw the military prison at Guantánamo. He has repeatedly testified to Congress that the U.S.-Mexico border represents a threat to national security, leading many to worry he’ll escalate the militarization of the border and U.S. immigration policy overall.

He’s one of three generals Trump has nominated for Cabinet and Cabinet-level positions, including retired General James “Mad Dog” Mattis as defense secretary. Mattis is likely to face questioning about his actions in May 2004, when he ordered an attack on a small Iraqi village that killed more than 40 people attending a wedding ceremony. Mattis went on to lead United States Central Command from 2010 to 2013, but the Obama administration cut short his tour over concerns Mattis was too hawkish on Iran, reportedly calling for a series of covert actions there. Mattis only retired from the military in 2013, meaning he’ll need Congress to waive rules requiring defense secretaries to be civilians for seven or more years after leaving the military. The rules are in place to ensure civilian control over the U.S. Armed Forces.

Trump’s third general is retired Army Lieutenant General Michael Flynn, who’s been appointed national security adviser. Flynn is well known for his anti-Muslim worldview, having called Islam a “cancer” and saying “fear of Muslims is rational.” His position does not require Senate confirmation. Despite the fact that during Trump’s campaign he railed against generals…

DONALD TRUMP: I know more about ISIS than the generals do, believe me.

AMY GOODMAN: …if Generals Kelly and Mattis are both confirmed, Trump will have more generals in his Cabinet than any administration since World War II.

Well, for more on Donald Trump and his generals, we are joined by Gordon Adams, professor emeritus at the School of International Service at American University. He just wrote a piece for The New York Times headlined “Donald Trump’s Military Government.” He is also co-editor of the book Mission Creep: The Militarization of US Foreign Policy?

GORDON ADAMS: Thanks for having me.

AMY GOODMAN: So, talk about Trump’s picks, these military generals, and what they mean to you.

GORDON ADAMS: Well, I think, Amy, the first point to recognize, that in the Cabinet as a whole, this is not normal. We’re not dealing with a normal situation anywhere. If you appointed Cabinet officers that are basically highly wealthy, relatively inexperienced in government, very rich, largely white males, that doesn’t look like 21st century America. And many of them simply oppose the agenda of the agencies they’re in charge of. The particular abnormality that we’re talking about here is the appointment of three generals to senior—of the five senior positions in national security and foreign policy—the national security adviser, the secretary of defense, the secretary of the Department of Homeland Security, the Office of the Director of National Intelligence and the state—secretary of state. Those are the five positions. We almost had four, because Petraeus was rumored to be a candidate for secretary of state. That’s quite unusual.

People will say Barack Obama had three generals in his Cabinet, too, at Cabinet levels, and indeed he did. One was the director of office of—director of national intelligence, the early version of James Clapper. Mostly, that job, which is advisory, not policymaking, has been filled by a military officer. And for a while, he had James Jones, who was a retired Marine general, as his national security adviser. Jones didn’t do very well. The third was actually in charge of the Department of Veterans Affairs, which is not a crucial foreign-policymaking department.

So, here, really, at the top of the architecture and right at the center of foreign policy and national security policy, we have Generals Flynn, Mattis and Kelly in the key advisory position to the president and two of the biggest departments involved with American security. That’s unusual.

AMY GOODMAN: And talk about what this will mean, the militarization of U.S. foreign policy, as you put it.

GORDON ADAMS: Right. And what I mean by that term is not what is traditionally thought. It’s not—this is not a coup. But it’s not normal. If this happened in a Latin American country over the past 20 years or so, we’d simply say to the government of that country, “You know, tut-tut, generals should be in the barracks. They shouldn’t be running civilian departments of government and engaged in this kind of mission creep across the American government.” But here we have more what I call the velvet militarization of American foreign policy—the gradual assumption that the right tool to use is the military tool, the tool they know is the military tool, a gradual sense that only the military capacity is capable in the American government of executing and implementing American foreign policy and national security policy.

Generals grow up in a particular culture. It’s hierarchical. It’s order-driven. It tends to see kinetics as a useful and the most useful tool for dealing with America’s foreign and national security challenges. Now, around him, the president has three generals advising him about how to proceed in foreign policy, but he doesn’t have what I call a balanced toolkit of statecraft. He doesn’t have a diplomat. He has a businessman at the secretary of state position with no government agency experience, and certainly no diplomacy experience. And he has a relatively ineffectual new appointee announced at the Office of the Director of National Intelligence, who is likely to be basically wiped off the face of the Earth in intelligence matters by Mike Pompeo, the head of the Central Intelligence Agency, a fight that Leon Panetta and Denny Blair had eight years ago, in which Leon Panetta won as the head of the CIA. So, we don’t have balanced statecraft. The advice is biased, as it were, towards the kinetic instrument.

GORDON ADAMS: “Kinetic” means going to war, deterring and fighting, basically, the combat and deterrence missions of the military. That orients a foreign policy in a particular way towards combatant operations, towards giving the military capability to undertake tasks. That’s the velvet militarization, is who does the job.

AMY GOODMAN: So I want to talk specifically about who is about to be—go before the Senate. As head of U.S. Southern Command, General Kelly was responsible for Guantánamo prison. He differed with Obama on many key policy positions, including whether to close Guantánamo. In an interview with Defense One, Kelly disputed the argument that Guantánamo is a recruiting tool for terrorists, saying, quote, “Bombing the living [bleep] out of ISIS in Iraq and Afghanistan, Syria, that would maybe irritate them more than the fact we have Guantánamo open.” This is General Kelly talking about Guantánamo last year.

JOHN KELLY: Because of the nature of the detention, DOD has to continue guarding them. But I do think there’s a place that we would need to indefinitely hold detainees, at least until whatever the conflict is is over, so whether it’s Guantánamo or a place in the States, continental United States. But I do think we need a place.

GORDON ADAMS: Yes, and General Kelly is probably the mildest of the three in terms of the militarization I’m talking about. “Mild” is a relative term here, because clearly his orientation is towards greater militarization of the American border, the maintaining of Guantánamo as a base. He has been outspoken about defense operations in the Caribbean and at the border with respect to drugs and criminal organizations. General Kelly has that particular can-do, organized, hierarchical, essentially kinetic, militarized view of how we should approach our national security. There’s no balance there. And he’s unusual in being the first general that’s actually headed the Department of Homeland Security, which has its own, as it were, Border Patrol semi-military capability.

AMY GOODMAN: Mattis, who would be defense secretary, having to get that waiver?

GORDON ADAMS: Mattis is, I think, what should be the focus. What’s interesting to me is that the Democratic Party has targeted eight of Trump’s Cabinet nominees as their principal focus. None of them are Mattis. They seem prepared to give Mattis a bye. They seem prepared to authorize the waiver that he requires in order to serve.

Now, that waiver is there for an interesting historical reason. There’s only been one general that ever headed the Defense Department, and that was George Marshall. That was back in 1950. He was secretary of defense for one year. And the law, the waiver law, was written with language in the statute that basically said this is intended to be a one-time exception, because those who wrote the original national security state origins knew that it was ill-advised. It was a question of civilian control to have somebody as the civilian secretary in the Department of Defense. The military side of the Department of Defense is assured by the chairman of the Joint Chiefs of Staff and the service chiefs. And frankly, since 1986, if the president wants military advice, he need only turn to a man in statute called his principal military adviser, who’s the chairman of the Joint Chiefs of Staff. So he has military advice. It’s not a question of giving him military advice. It’s a question of putting a necessary professional deformation towards military and kinetic operations in charge of the civilian control in the department. As I say, in a Latin American country, we’d say this is ill-advised.

AMY GOODMAN: Now, I think General Flynn will be with Trump today as he gets briefed. He doesn’t need—he doesn’t need approval. He’s one of the ones who pushed the idea of the child sex trafficking ring that he said Hillary Clinton was involved with and that she declared war on the Catholic Church. We just have 15 seconds.

GORDON ADAMS: General Flynn is not unusual, because we’ve had Colin Powell, Brent Scowcroft as national security advisers. Not unusual to have a military person. He just seems temperamentally ill-suited to a job which is to arrange the options for the president and give a relatively neutral array of choices to the commander-in-chief. 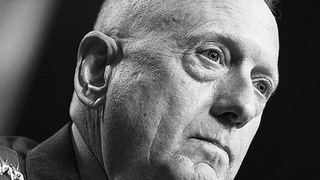