As Deadly Wildfires Rage in California, a Look at How Global Warming Fuels Decades of Forest Fires

In California, powerful winds and bone-dry conditions are fueling massive wildfires. A state of emergency has been declared in northern areas as the fires have left at least 17 people dead, destroying whole neighborhoods and forcing 20,000 people to evacuate their homes. The wildfires come after the U.S. Forest Service warned last year that an unprecedented 5-year drought led to the deaths of more than 100 million trees in California, setting the stage for massive fires. Climate scientists believe human-caused global warming played a major role in the drought. We speak with Park Williams, bioclimatologist at Columbia University’s Lamont-Doherty Earth Observatory and co-author of a 2016 report showing that global warming is responsible for nearly half of the forest area burned in the western United States over the past three decades.

JUAN GONZÁLEZ: We begin today in California, where powerful winds and bone-dry conditions are fueling massive wildfires. A state of emergency has been declared in northern areas of the state as the fires have left at least 17 people dead, destroying whole neighborhoods and forcing 20,000 people to evacuate their homes. State fire officials say they’re battling at least 17 major fires in nine counties, which have burned more than 115,000 acres in just the past 12 hours. The chief of California’s fire agency says the two most destructive fires are “zero percent contained.” One of the worst blazes was in the city of Santa Rosa in Northern California’s Sonoma County, where fire ripped through a trailer park, destroyed homes, restaurants and hotels, and forced medical teams at a local hospital to evacuate patients as flames approached. On Tuesday, Vice President Mike Pence declared the state a disaster area.

VICE PRESIDENT MIKE PENCE: Cal Fire is inspiring the nation, and we stand with them with great admiration and appreciation. Just a few moments ago, I informed Governor Brown that President Trump has approved a major disaster declaration for the state of California to assist in the response to wildfires that are impacting across the state.

For more, we’re joined by Park Williams, who is a bioclimatologist at Columbia University’s Lamont-Doherty Earth Observatory. He’s the co-author of a 2016 report showing global warming is responsible for nearly half the forest area burned in the western United States over the past three decades.

Welcome back to Democracy Now! It’s great to have you with us. So, explain what is happening right now in California. The devastation is just incredible.

PARK WILLIAMS: Yeah, it is. So, these fires that are getting the attention right now in California are very different from the big forest fires that had been getting our attention for the last several years. These fires are burning through towns. And the fires are really being driven by a big high-pressure system that is sitting over the coasts of the U.S. and driving winds from the east to the west, bringing very dry, warm air from the deserts of Nevada and Arizona out to the coast. And by the time the air gets to the coast, it’s compressed down to sea level. It’s very warm and very dry. It pulls the moisture out of vegetation, makes it ready to burn.

JUAN GONZÁLEZ: And you said, before the show began, that part of the problem may have been the rains that came earlier this year?

PARK WILLIAMS: Yeah. So these fires out on the coast are very different from forest fires, in that out near the coast of California there’s not a whole lot to burn oftentimes. We actually didn’t hear a ton about fires occurring near the coast of California during the big drought, simply because it was so dry, there wasn’t much growing, so not much to burn. This year, though, follows a record-breaking wet or near record-breaking wet winter in California. And anybody who was in California in the spring knows it looked like the English countryside, with green, lush grass growing everywhere. Well, that’s the stuff that’s burning right now. Grass is a very effective carrier of fast-moving fire. And all you need to do is dry the grass out, add a flame and add very strong winds, and that’s what’s going on now.

AMY GOODMAN: So, you have said, in this 2016 report that looks at the link between climate change and forest fires, that since 1980—well, how much of the fires can be attributable to climate change?

PARK WILLIAMS: So, when we concentrate on forests, we find there’s a very strongly link between drought and the amount of area that burns in any given year. And one really important part of the drought link is temperature. And we can actually mathematically determine the relationship between drought and fire, and therefore temperature and fire. And we know from climate modeling that the western U.S. has increased in temperature by two to two-and-a-half degrees Fahrenheit over the last century because of human-caused climate change trends. And from that value, we can back out the amount of area that has burned due to human-caused climate change, and we find that about half of the area of forest in the western U.S. that have burned over the last 35 years is attributable to that warming trend. And that half is really big. It equals the size of Massachusetts and Connecticut combined.

JUAN GONZÁLEZ: And what about the issue of urban sprawl, of a continued expansion of towns into areas, forest areas, as well? That’s been also raised as a factor that makes the spread of these fires even more catastrophic.

PARK WILLIAMS: Absolutely. So, the first thing you need in order to have a fire is, of course, a spark—turns into a flame and carries through into a large fire. And in the western U.S., and especially in California, people are the providers of those sparks. This time of year, lightning is not occurring in coastal California. It’s sparks created by people, either because people are lighting fires actively or because human infrastructure is causing fires, such as downed power lines. And so, when I say that global warming has increased the amount of fire, that is really promoted by the huge amount of sparks, the amount of ignitions, that people are providing to the landscape. If it weren’t for people setting the fires, then we wouldn’t see fires responding to global warming as we have.

AMY GOODMAN: Why is there such a disconnect between you, the scientific community, and the meteorologists on television? I mean, who are they? Because now there is a second question being asked. I mean, they all flash “severe weather,” “extreme weather” on their TV screens, across the lower part of the TV screen, as they talk. But they do not flash the words “global warming.” But the second step now is they’re asked, like an anchor will say, “Why is this?” But they will not use these words. They’ll say “warm weather here” or “colder weather,” “rain,” “fog,” whatever, but they will not make this leap.

PARK WILLIAMS: Yeah, it’s a really interesting phenomenon. I think it’s because the term “global warming” and the term “climate change” have been politicized. But in the circles that I work with, with real climatologists who are working on these issues every day, there is no hesitation to use those terms. As you put greenhouse gases into the atmosphere, the globe warms, whether it’s the Earth or another planet. It’s just the law of physics. And so, it is surprising to see trained meteorologists on TV steer away from those terms. Not all of them do. I’ve seen some good, refreshing and educated discussion, as well.

JUAN GONZÁLEZ: I wanted to ask you, in terms of your—you’ve said that we should be getting accustomed to even more and more virulent fires in the future. Could you talk about that, as well?

PARK WILLIAMS: Yeah. So, since the early 1980s—when we go back to talking about forests, since the early 1980s, we’ve seen the amount of area of forest that burns in any given year increased by 600 to 800 percent. And so, these days, every year, we hear people who are fighting fires saying that they’ve been fighting fires for their whole careers—say, the last 30 years—and they’re seeing fire activity different than anything they’ve seen during their whole careers. Now, based on what we know about global warming and the link between warming and fire, and the amount of that fire has already increased in the last 30 years, it’s, I’d say, an easy extrapolation to say, in a warmer world, 30 years from now, fires will once again be unrecognizable to people who are fighting fires today. They will continue growing, and therefore continue to be coming—continue to become far more difficult to fight.

AMY GOODMAN: Well, I want to thank you very much for being with us, Park Williams, a climate scientist at Columbia University’s Lamont-Doherty Earth Observatory, the co-author of a 2016 report showing global warming is responsible for nearly half the forest area burned in the western United States over the last three decades. And we will link to that at democracynow.org.

This is Democracy Now! When we come back, the Reverend Jesse Jackson joins us, before he heads off with a planeload of aid to Puerto Rico. We’ll talk with him about what’s happening on the island. We’ll go from Puerto Rico to the football games and to what Vice President Pence did in going to Indianapolis and then leaving a game, protesting the black athletes who took the knee, who protested racism during the national anthem. This is Democracy Now! Back in a minute. 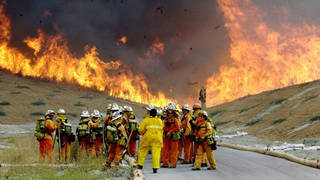