Horace Campbell on U.S. Disregard for Black Lives, from “War on Terror” in Africa to U.S. Army Widow at Home

We continue to examine the U.S. military presence in Africa and what happened during the ambush of U.S. Special Forces by militants in the West African nation of Niger, which is now the subject of a military and FBI investigation. We are joined from Luanda, Angola, by Horace Campbell, who is currently spending a year in West Africa as the Kwame Nkrumah chair at the Institute of African Studies at the University of Ghana. He is a peace and justice scholar and professor of African American studies and political science at Syracuse University.

AMY GOODMAN: This is Democracy Now! I’m Amy Goodman, was we continue to examine the U.S. military presence in Africa and what happened during the ambush of U.S. Special Forces in the West African nation of Niger, which is now the subject of both a military and FBI investigation, with the death of four [U.S. soldiers], five Nigerien soldiers, and at the same time, you have President Trump attacking the African-American congresswoman, friend of the La David Johnson family. The widow herself feels under attack, as well, by the president of the United States.

We’ll look at all of this with Horace Campbell. He’s in Luanda, Angola. Professor Campbell is currently spending a year in West Africa as the Kwame Nkrumah chair at the Institute of African Studies at the University of Ghana, peace and justice scholar and professor of African American studies and political science at Syracuse University in New York.

You’re now in Luanda, Angola, Professor Campbell, but I wanted to go back to Part 1 of our conversation, where we started to talk about Libya. You say in order to understand what’s happening in Niger, we have to understand what has happened in Libya. Can you take us down that path?

HORACE CAMPBELL: Thank you, Amy. And, you know, I wrote a book called Global NATO and the Catastrophic Failure in Libya: Lessons for Africa in the Forging of African Unity. We now know, as was said on this program, that Sarkozy of France said that France went into Libya to save the Europe. There are 14 African countries who cannot have independent monetary and fiscal policy because their currency is tied to the euro through France. Now, France mobilized jihadists, those who are called terrorists, especially from among the Tuareg, in Libya to fight. France mobilized jihadists to overthrow Gaddafi. Those same jihadists were guided to Mali to overthrow the people and to disrupt the situation in Mali. The same France that mobilized the jihadists then went to the United Nations in 2013 to get the United Nations Security Council to support France to fight against terrorism. This is duplicity.

AMY GOODMAN: Professor Campbell, I don’t know how much you’re following back in the United States as you’re there in Angola, but I wanted to go to this unusual news conference that the Joint Chiefs of Staff Chair General Joseph Dunford had on Monday laying out a timeline of the deadly October 4th Niger ambush in which five Niger soldiers and four U.S. soldiers were killed while on patrol, promising the military would conduct a thorough and transparent investigation.

The general’s explanation came as the widow of U.S. Army Sergeant La David Johnson spoke out against Donald Trump’s handling of the aftermath of her husband’s death, saying during a condolence call the president couldn’t remember the name of her husband. In an interview with ABC’s Good Morning America Monday, Myeshia Johnson reaffirmed she and others heard President Trump say, quote, “He knew what he signed up for, but it hurts anyway.” You know, that statement refutes Trump’s claim that the remark was “totally fabricated.”

HORACE CAMPBELL: We should send our condolences to Mrs. Johnson, because what is being played out with the congresswoman and Mrs. Johnson is a reflection of the relationship between the present White House and African population in the United States of America. We know the history of Donald Trump, the Republicans and the conservative forces, when it comes to the African people in the United States of America. It was inevitable that we would have this relationship, because one of the difficulties for the United States in Africa is that it’s very nervous about the presence of black people in the U.S. military, because if black people in the U.S. military get in touch with the revolutionary forces in Africa, then it could create bigger problems for the United States of America. So the nervousness that we see at the top of the U.S. military, in the White House, over its relationship with black people was manifest in what happened with the congresswoman and with Mrs. Johnson.

And what we should be doing is to intensify the call for the dismantling of the U.S. Africa Command, and that every cent that is being spent within the U.S. Africa Command to militarize and destabilize Africa should go to reconstruction in Detroit, in the inner cities and to provide water, healthcare and education for people in the United States of America. Africa is very rich. Africa can reconstruct itself, if the United States is not in Africa to ensure that the dollar is the currency of world trade and that African dictators send billions of dollars out of Africa to keep the dollar as the international currency.

AMY GOODMAN: Professor Campbell, before we go, we talked about Niger, five Nigerien soldiers killed, four U.S. special forces killed. In Somalia, over, it looks like, 358 Somalis were killed in what’s known now as the Mogadishu massacre. It may be—there’s speculation that the Somali involved with this terrible bombing, his own village was drone-struck this summer. Can you talk about what happened in Somalia and also this trip that the U.S. ambassador to the United Nations, Nikki Haley, is now in the midst of, in Ethiopia, South Sudan and Democratic Republic of Congo?

Well, the situation is like this in Somalia, that the people of Kenya want the Kenyan troops to withdraw from Somalia. Uganda plans to withdraw from Somalia. Next door, in Ethiopia, there’s a revolutionary situation in Ethiopia, and Ethiopia cannot deploy troops into Somalia as it did in the past. Then, the United States have to deploy troops in Somalia in order to quell the possibilities of revolution in Ethiopia and to support the conservative forces in Kenya—if you note that the head of the Africa Command said to the Kenyan people that electing Raila Odinga would be wrong, because Raila Odinga is calling for U.S. troops to depart from Somalia.

So, the United States, by going back into Somalia, has a number of reasons: one, to intensify the destabilization of Somalia; number two, to prop up those conservative governments in Uganda, Ethiopia and Kenya, who have troops in Somalia; and, number three, more importantly, to act as an ally of Saudi Arabia, Israel, in the planned war against the people of Iran. It is for those reasons why we have to see the United States’ militarization of the region as part of its failed militarization of the Near East and Iraq and Afghanistan. And Africans will not tolerate this militarization. So, the United States’ presence in Africa is creating the basis for supporting military dictators, as we have in Ethiopia.

AMY GOODMAN: And the visit of Nikki Haley, the significance of where else she is going, like the Democratic Republic of Congo?

HORACE CAMPBELL: Yes. Nikki Haley is someone who doesn’t have a clue about what’s going on in Africa. And in the Democratic Republic of the Congo, we have, again, a situation where, for 40 years, the United States has supported the oppressive forces, after assisting in the killing of Patrice Lumumba. Again, in that society, the African Union, the peacekeeping forces and the democratic forces want peace. There is a collaboration between the United Nations peacekeeping forces and the government of the Congo to ensure that the situation remain destabilized so that the Congo can be looted. The same about South Sudan, where we have more generals than schoolteachers—I’m sorry, more generals in South Sudan than—the amount of generals is so much that millions of dollars are being spent on both sides. And the African Union had an investigation into how to bring peace into South Sudan. Nikki Haley, the United Nations, United States of America are stirring up fires in Africa to ensure that there’s no peace in Africa.

AMY GOODMAN: Well, we’ll have to leave it there, and I thank you very much, Horace Campbell, for joining us, joining us today from Luanda, Angola, currently spending a year in West Africa as the Kwame Nkrumah chair at the Institute of African Studies at the University of Ghana, peace and justice scholar and professor of African American studies and political science at Syracuse University in New York. This is Democracy Now!, democracynow.org, The War and Peace Report. 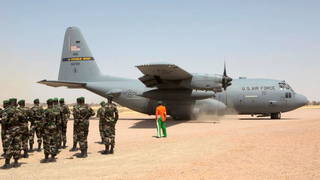