Efforts by President Donald Trump to ease some restrictions on U.S. weapons sales overseas have raised concerns as he considers changes that would allow the State Department and Pentagon to more actively advocate on behalf of American arms manufacturers. The move could be included in an executive order or presidential memorandum Trump plans to issue this fall. This comes as the United States is already the global leader in weapons exports, accounting for more than half the world’s annual arms deals. We speak with William Hartung, the director of the Arms and Security Project at the Center for International Policy.

StoryJul 06, 2022Highland Park Suspect Was in Online Communities Where People Are “Programming Themselves to Kill”

JUAN GONZÁLEZ: Well, we turn now to efforts by President Donald Trump to ease some restrictions on U.S. weapons sales overseas, which has raised concerns about flooding the international market with high-tech weapons. According to press reports, the changes would include allowing the State Department and the Pentagon to more actively advocate on behalf of American arms manufacturers, and are set to be included in an executive order or presidential memorandum that Trump plans to issue this fall.

AMY GOODMAN: This comes as the U.S. is already the global leader in weapons exports, accounting for more than half the world’s annual arms deals.

For more, we’re joined just for a few minutes by Bill Hartung, the director of the Arms and Security Project at the Center for International Policy. His latest book, Prophets of War: Lockheed Martin and the Making of the Military-Industrial Complex.

William Hartung, talk about what the U.S. is doing abroad around guns.

WILLIAM HARTUNG: Well, there’s two things. One is they’re loosening gun exports. They’re moving regulation from the State Department, which at least looks at human rights, to the Commerce Department, which is supposed to promote products. So they’re treating guns like any other product. Hundreds of thousands of people get killed with small arms around the world. So this is of huge consequence.

And I think members of Congress need to stand up to that. They have done so on the Yemen issue. Forty-seven members of the Senate voted against that Trump bomb deal, which is the biggest vote we ever had against the Saudi lobby. But I think on gun control and gun exports, we have a long way to go. Some members, like Senator Leahy, Senator Cardin, Senator Feinstein, have talked about this gun export regs and said, “This is not what America should stand for.” So I think there is a little bit of a foothold in the Congress, but they need to hear more from people. And I think, ultimately, this issue has to become part of the larger progressive movement.

JUAN GONZÁLEZ: And what’s the role of the NRA in this push for sales abroad? I mean, supposedly, the NRA is representative of the people of the United States holding on to their Second Amendment right, not necessarily for exporting guns everywhere else in the world, right?

WILLIAM HARTUNG: Well, going back decades, they’ve concerned themselves with global exports. They think gun control anywhere will eventually come back and infect the United States. And so, they say they care about the troops. A lot of these guns are going to be used against our troops. They’re going to be with criminal gang members and terrorists and dictators. They’re going to fall into the hands of U.S. adversaries. So, again, just as they claim more guns here are going to protect people, and that’s ridiculous, they claim more guns overseas are somehow going to make for a safer world, when in fact they’re going to kill tens of thousands of people. So, the NRA and the gun manufacturers are behind this export loosening. And they’re probably the only ones, in my opinion, who are going to benefit from it.

AMY GOODMAN: Are gun sales down in the United States? Is that also why the U.S. is pushing them abroad?

WILLIAM HARTUNG: Domestically, they’re down, because people aren’t as worried that Trump is going to take their guns away. So there’s not the huge rush there was under Obama. And so these gun manufacturers are desperate for more foreign sales. And they don’t care who the guns go to. And I think that’s really the problem.

AMY GOODMAN: Well, any other words, as we wrap up, of what you feel is important to understand as we are just talking in the aftermath of the worst massacre that we have seen in this country conducted by one single gunman?

WILLIAM HARTUNG: Well, Martin Luther King Jr., in his anti-Vietnam War speech, said, you know, “I can’t in good conscience fight violence at home if I don’t stand up to my own government, which is the greatest purveyor of violence around the world.” And I think we’re still in that position. And I think we need to do both, and I think we can.

AMY GOODMAN: William Hartung, director of the Arms and Security Project at the Center for International Policy.

This is Democracy Now! When we come back, President Trump is headed to Puerto Rico, two weeks after Hurricane Maria devastated the island. Stay with us.

AMY GOODMAN: “I Won’t Back Down” by Tom Petty. Tom died last night at the age of 66 of a heart attack in Santa Monica, California. 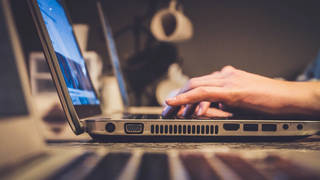