“It Was an Insult”: Rep. Nydia Velázquez on Trump’s Visit to Puerto Rico, Attacks on San Juan Mayor

We get response from Puerto Rican-born Rep. Nydia Velázquez (D-NY) to President Trump’s visit to the island two weeks after Hurricane Maria, and his comments that he would help the U.S. territory wipe out its $73 billion debt to help it recover from the extensive damage caused by Hurricane Maria. White House budget director Mick Mulvaney later walked back the remarks.

NERMEEN SHAIKH: We turn now to Puerto Rico in the aftermath of Hurricane Maria, the strongest storm to hit the island in nearly a century. More than two weeks later, more than 90 percent of its three-and-a-half million residents remain without electricity, running water and adequate food. After President Trump visited Puerto Rico on Tuesday, he told Fox News his administration would help Puerto Rico wipe out its $73 billion debt to help it recover from the extensive damage caused by Hurricane Maria.

PRESIDENT DONALD TRUMP: Well, we’re going to work something out. We have to look at their whole debt structure. You know, they owe a lot of money to your friends on Wall Street, and we’re going to have to wipe that out. That’s going to have to be—you know, you can say goodbye to that. I don’t know if it’s Goldman Sachs, but whoever it is, you can wave goodbye to that. We have to do something about it, because the debt was massive on the island.

MICK MULVANEY: Dealing with the challenges that Puerto Rico had—the island is at least $72 billion in debt, $120 [billion] if you go by other counts, before the storm. We are going to focus our attention right now on rebuilding the island, repairing the island, making sure everybody is safe and that we get through this difficult times. We are not going to deal right now with those fundamental difficulties that Puerto Rico had before the storm. By the way—and that not—many folks have not talked about this yet—a lot of those issues are already dealt with through previous legislation called PROMESA.

AMY GOODMAN: This comes after Trump tweeted last month that, quote, “Puerto Rico, which was already suffering from broken infrastructure & massive debt, is in deep trouble,” with, quote, “billions of dollars owed to Wall Street and the banks which, sadly, must be dealt with.”

For more, we go to Capitol Hill, where we’re joined by Congressmember Nydia Velázquez, who comes from New York but was born in Puerto Rico, actually right where Hurricane Maria made landfall.

We welcome you to Democracy Now!, Congressmember. Can you respond to this issue of the debt, why it is so significant? You went to Puerto Rico right after the storm hit, well before President Trump. You went with New York Governor Andrew Cuomo. Talk about what you say needs to happen now.

REP. NYDIA VELÁZQUEZ: What we need to do is to get the federal government to provide the resources that we need in order to rebuild Puerto Rico. And that should be the focus. The reality is, Puerto Rico is running out of cash, have no liquidity. And this is not the time to deal with the public debt. You know, we have PROMESA, an oversight board, that sent a letter to the president asking for—working with the administration to get an infusion of cash, because, otherwise, the government will not be able to function. So that should be the primary focus, to make sure that Puerto Rico has liquidity, that Puerto Rico can have the safety and security that is needed, and also provide access to healthcare, to the health services, that are so important particularly after the aftermath of this hurricane.

AMY GOODMAN: The Jones Act, are you calling for an extension? There was a waiver for 10 days, after enormous outcry that Texas and Florida had gotten it, but Puerto Rico hadn’t. Explain its significance and what you’re demanding now. Why is the Jones Act so important, what it is?

REP. NYDIA VELÁZQUEZ: It is important, because it’s not only about putting together a relief effort and trying to, you know, remove the debris and do all the cleanup that needs to happen, but in—if we want to put Puerto Rico back on track in terms of economic recovery, the Jones Act really is an obstacle. It really hinders the ability of transporting all the supplies and all the materials that we need, including oil and fuel. And not only that, but also it makes it more expensive. So, what I’m asking is for a waiver of at least one year. But I’m working with other members to introduce legislation that will call for a five-years waiver so that Puerto Rico—it becomes a tool of economic development for Puerto Rico.

NERMEEN SHAIKH: And, Congressmember Velázquez, you went to Puerto Rico very soon after Hurricane Maria made landfall. Can you tell us what you saw there?

REP. NYDIA VELÁZQUEZ: I saw what President Donald Trump didn’t see. I saw the destruction, devastation, and the desperation of the people in Puerto Rico. Ninety percent—still today, 95 percent of the people in Puerto Rico, out of 100, do not have electricity, drinking water, medicines, hospitals. They don’t have power. And as we saw yesterday or the day before—or, late on the day before, the governor, right after the president left the island, said that the toll of death increased, has risen from 16 to 34. And if you read the papers today, all the accounts are telling us that doctors in Puerto Rico are very concerned. Many people are—could be exposed to many illnesses because of polluted water, because of the lack of medicine, because of the lack of medical supplies.

AMY GOODMAN: Congressmember Velázquez, your assessment of the Trump administration and what it’s doing in Puerto Rico? Trump goes down, to say the least, quite late. And he’s hurling these rolls of paper towels at people. He attacks the San Juan mayor, Carmen Yulín Cruz, and talks about Puerto Ricans as wanting everything done for them. Your thoughts?

REP. NYDIA VELÁZQUEZ: It is quite depressing, frustrating. Watching the images coming out of that event make me angry. I believe that it was an insult and a lack of respect to the people of Puerto Rico, fellow citizens, who were expecting from the president to go there, console, comfort, give assurances that the federal government will be there, that he understood the pain, but that the important message was we’re going to be here all the way until Puerto Rico is rebuilt. Instead, he was talking about the cost to the federal budget. How could you, when people are dying, when people are suffering, raise such issues, that you didn’t raise when you went to Texas and Florida? You know, these are American citizens. These are fellow citizens. So, I was quite angry that he went to a Guaynabo suburb, very wealthy part of Puerto Rico. And I was expecting for him to really grasp the severity of the crisis by going into the most isolated areas, the most devastated areas, so that he will be able to come back and then put forward a relief recovery package that makes sense based on the real needs of the people of Puerto Rico.

AMY GOODMAN: Would you call it racism?

REP. NYDIA VELÁZQUEZ: I do not want to. I think that what it shows is how out of touch this president and this administration is right now on the damage that was caused in Puerto Rico, the destruction. You know, I don’t know if it’s racism or ignorance. But I hope that next—next weeks, we’re going to be passing a short-term relief package. And after that, we need to work on a robust, long-term package that would include the resources for Puerto Rico to be able to rebuild.

NERMEEN SHAIKH: And, Congressmember Velázquez, do you think that the debt should be forgiven? And if so, what do you think the effect would be on the reconstruction effort?

REP. NYDIA VELÁZQUEZ: Well, the president made such a statement. He didn’t discuss how he will achieve that. The mechanics, we don’t know. But I will say this to you. Forget about public debt right now. The most important aspect and commitment, from my end, is to fight to get the resources that we need. If we don’t make Puerto Rico whole, you’re going to see a massive migration of people coming into the United States. And hedge funds or others who are owed money, they need to forget that Puerto Rico will be able to pay anything. If anything, we have to take care of retirees in Puerto Rico and the pension liabilities. I think that every—

AMY GOODMAN: Should the debt be forgiven? Forgiven?

REP. NYDIA VELÁZQUEZ: If there is a way, in terms of the authority of the federal government, yes, I will support it.

AMY GOODMAN: I wanted to ask you, very quickly, about DACA. You represent many people from Puerto Rico. Again, Puerto Ricans are American citizens, three-and-a-half million American citizens. But there are many undocumented people in New York. And we want to just ask about what should happen. Today is the deadline for them to apply for renewals of their DACA status, under the Deferred Action for Child Arrivals immigration plan, which shields 800,000 young people from deportation. What is Congress doing on this day?

REP. NYDIA VELÁZQUEZ: Well, as you know, the Democrats filed a discharge petition, that will require 218 signatures. We are not there yet. We got all the Democrats to sign into that discharge. We also introduced legislation, Lucille Roybal-Allard, the DREAM Act. We are at 202 or 200. So, we are working very hard, reaching out to moderate Republicans and reaching out to some of my colleagues in New Jersey, to see if we could get the 218 votes that we need in order to bring a bill to the floor. In the meantime, we have met with the administration. There has been commitments that they will not proceed to deport the DREAMers.

AMY GOODMAN: Congressmember Nydia Velázquez, thanks so much for being with us. 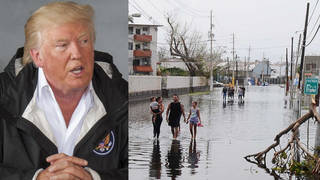