At the United Nations climate summit in Bonn, Germany, Democracy Now! speaks with Democratic Senator Brian Schatz of Hawaii, who has joined a coalition of U.S. lawmakers to represent an anti-Trump bloc at the conference.

AMY GOODMAN: Well, on Saturday, we also got a chance to speak with Democratic Senator Brian Schatz of Hawaii. I began by asking him why he’s here in Bonn, Germany.

SEN. BRIAN SCHATZ: Well, we want to send the unequivocal message that although the president has taken the wrong position with regard to climate, generally, and specific—specifically with regard to staying in the Paris climate accords, that the United States is still in. The framework that allows us to make progress on clean energy is a couple of things. First, it’s the investment tax credit and the production tax credit, which is federal law. Second, it’s the Clean Air Act, which is federal law. He is not a monarch. He cannot repeal that law. He doesn’t—he doesn’t just not only not have 60 votes, he doesn’t even have 50 votes. And so, people don’t necessarily understand that although the president is making unhelpful statements, he is not in charge of clean energy policy. We are making progress at the state level, at the city level and through the private sector. So, the clean energy revolution will continue regardless of what he and Scott Pruitt want.

SEN. BRIAN SCHATZ: Hawaii feels so passionately about climate. You know, our oceans are warming. As a result, we have more ocean acidification and coral bleaching. You can actually see it. There was a summer during which the whole South Shore of Oahu, you could see the bleached coral almost across all of the surfing spots. And so it’s gone from an issue that only environmentalists cared about to an issue that almost everybody in the state of Hawaii cares about, because it’s really affecting our quality of life.

And so, as a result, we’re taking action. We have the first clean energy statute that requires 100 percent of all of our energy to be produced from clean, renewable resources by the year 2045. We started with—similar to the COP21, with voluntary targets and not-ambitious-enough targets, similar to what the U.N. has done. But we ratcheted up our ambition over a period of time. Then we made it mandatory. Then we exceeded those targets. Now we’ve almost quadrupled clean energy production in the state of Hawaii. And last year, we finally signed a law to say 100 percent clean energy.

AMY GOODMAN: You’ve been senator for five years. The last year, President Trump was elected. How has this country changed? How has it affected Hawaii this past year?

SEN. BRIAN SCHATZ: Well, it’s really interesting. You know, President Trump, in a lot of ways, not just on policy but in terms of style, is everything that Hawaii is not. We believe that our diversity is a strength and not a weakness. We believe in each other. We want to protect each other. And so, he really is offending the sensibilities of so many people across the state of Hawaii. And in a lot of ways, you know, we took pride in President Obama’s even-keeled behavior, this idea that you can disagree without being disagreeable. And President Trump is everything that we are taught not to be, growing up in Hawaii.

AMY GOODMAN: Finally, what’s your message for an island president—in fact, President Trump is from New York City, Manhattan is an island, New York has a huge coastline—both identifying with that, from Hawaii to New York, and then the Pacific islands—leader is the president of the COP—and, of course, the Pacific islands are suffering immensely from human-induced climate change?

SEN. BRIAN SCHATZ: Islands are going to suffer from climate change in very, very difficult ways. And it’s not just Pacific islands. It’s not just Puerto Rico. But, you’re right, it’s coastal areas up and down the East Coast of the United States of America. Boston is really vulnerable. New York City is very vulnerable. I know the state of Maine is contending with tremendous challenges as lobster migrates north. You know, nobody can escape climate change, and it’s no longer just something that environmentalists care about. This is a quality-of-life issue. This is an economic issue. It’s a moral issue. It’s a fiscal issue. And we’ve got to solve it together.

AMY GOODMAN: How do you identify with Puerto Rico?

SEN. BRIAN SCHATZ: Well, we’re—you know, I think the challenging thing with Puerto Rico’s situation is that I don’t feel they are getting the respect that they would get if they were closer to the United States. And we have to make sure that we help them to recover. And I thought they should have mobilized the United States military instantly, as they would have if this had happened in an American state as opposed to a territory.

SEN. BRIAN SCHATZ: I don’t want to characterize it. I just think they made the wrong decision.

AMY GOODMAN: And my last question doesn’t relate to climate change, but to immigration, though there are many climate refugees. And that question is about Jeff Sessions speaking on a right-wing radio talk show about the judge, the federal judge in Hawaii, who stopped the Muslim ban. And he said—that’s Jeff Sessions—he said, “How is it possible that a man on an island in the Pacific can stop the president of the United States?” Senator Schatz, what’s your response?

SEN. BRIAN SCHATZ: That island in the Pacific is Oahu. It’s where I live. It’s the capital of the 50th state, the state of Hawaii. And I would just add that Jeff Sessions voted for that judge.

AMY GOODMAN: That’s Democratic Senator Brian Schatz of Hawaii. Later this week, we’ll bring you a special report on the resistance to the largest open-pit coal mine in Europe. That open-pit coal mine is just miles down the road from the U.N. climate summit. We went there on Sunday and visited the tree-sit. Hundreds of people have been involved with this protest for years. Thousands came out last weekend.

Democracy Now! is accepting applications for our paid six-month internships. Go to democracynow.org for information. 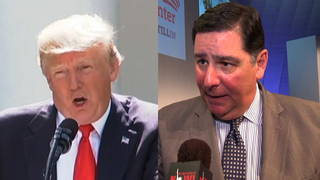