President Donald Trump is visiting the Philippines as part of his 13-day trip across Asia, where he met with Philippines President Rodrigo Duterte and said the two have a “great relationship.” Since taking office in 2016, the controversial Filipino leader has presided over a bloody so-called war on drugs in which more than 7,000 people have been extrajudicially killed by police or vigilantes. It is unclear whether Trump raised the issue of human rights when he saw Duterte. While broadcasting from the U.N. climate conference in Bonn, Germany, we speak with Tetet Lauron, program manager for climate justice at IBON International, who was a member of the Philippines delegation to the United Nations climate summits from 2011 to 2013.

StorySep 04, 2019U.S. Journalist & Activist Brandon Lee Shot in Philippines After Being Called “Enemy of the State”

AMY GOODMAN: We’re broadcasting live from the U.N. climate summit in Bonn, Germany, that’s actually hosted by Fiji. Well, the U.N. climate summit comes as President Trump is in the Philippines as part of his 13-day trip across Asia. Hours ago, Trump met with Philippine President Rodrigo Duterte on the sidelines of the ASEAN summit—that’s the Association of Southeast Asian Nations—in Manila. Trump said he has a “great relationship” with Duterte, who has presided over a so-called war on drugs that’s seen thousands of people killed by police or vigilantes since Duterte took office.

The meeting came after Duterte sang a Filipino love song during a gala dinner Sunday night with other world leaders, saying later he sang it on the orders of President Trump. This all comes just a few days after Duterte bragged about having stabbed someone to death when he was 16 years old. During Duterte’s campaign, he also joked about wanting to have been first in line for the gang rape of an Australian missionary who was raped and murdered in 1989. Duterte said, quote, “She was so beautiful, the mayor should have been first. What a waste,” unquote. Duterte himself was the mayor of Davao City.

Before we talk climate politics, let’s talk the politics of your country and President Trump coming to the Philippines. You know, every U.N. climate summit, it seems, over the last years, we are dealing with a typhoon in the Philippines. What about this year?

TETET LAURON: Well, today, we are facing an even more destructive and horrible cyclone, and that is President Donald Trump himself.

AMY GOODMAN: What do you mean by that? And talk about his trip and his so-called, as he described it, great relationship with Duterte, your president.

TETET LAURON: Yeah. As we speak, I’m very proud to say that a lot of—thousands of activists, thousands of farmers, workers are trooping down the streets of Manila to disrupt this meeting of the ASEAN and also to say that Trump is not welcome in the Philippines.

The Philippines and the United States has always had a special relationship, in the sense that, you know, governments and presidents, even before Duterte, have welcomed U.S. policy with open arms, and very welcoming of U.S. investments, U.S. corporations taking away our resources, exploiting our people and just getting away with virtually everything, even military exercises.

AMY GOODMAN: Can you give us a history—I did a little bit—of his human rights record? I mean, he’s only been president for a year now, just as President Trump has been. But, I mean, this story of 1989, him saying he wishes he was first in line to rape an Australian missionary, who was raped and murdered? To talk about just the last few days, he says he murdered a person when he was 16 years old?

TETET LAURON: Yeah, you can really see the character, you know, that he’s racist, he’s sexist, he’s misogynist, and he’s militarist. In his reign as 20—for 20 years as mayor of Davao, everyone knows, but it’s not really admitted officially, that he was—you know, he has a Davao death squad behind him keeping peace and order in Davao. And he’s doing it right now. And he even brags that he could put the whole county, the entire country, under martial law anytime he wants to.

AMY GOODMAN: And the significance of Trump saying that he, in a sense, supports—he says he has a “great relationship” with Duterte. What does that mean for the Filipino people?

TETET LAURON: It only goes to show Duterte’s true colors. Initially, he said that he was going to pursue an independent foreign policy. He was very critical of the United States. But what we’re seeing now is that these two guys, these two macho bullies, have a very special relationship and that they like each other. So what does it say about the policies, no? Duterte is here to follow or to be obedient to whatever the U.S. says.

AMY GOODMAN: What is the name that people have for Donald Trump and Rodrigo Duterte?

TETET LAURON: Oh, we call them Dutertrump, because they’re basically of the same mold. 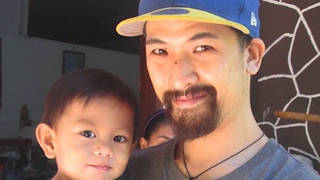 U.S. Journalist & Activist Brandon Lee Shot in Philippines After Being Called “Enemy of the State”