As the U.N. climate summit gets underway in Bonn, Germany, African negotiators, activists and youth are particularly vocal about the need for urgent action to mitigate the most devastating effects of global warming. Africa is expected to suffer more from climate change than any other continent. This summer, flooding and mudslides in Sierra Leone killed more than 1,000 people, while extreme drought has left millions of people at risk of famine in Kenya, Somalia and Ethiopia. We speak with Kumi Naidoo, longtime South African anti-apartheid activist and former head of Greenpeace International. He is the chair of a new organization called Africans Rising for Justice, Peace and Dignity.

AMY GOODMAN: Yes, we’re broadcasting live from the U.N. climate summit here in Bonn, Germany, the home of Beethoven. This is the first climate summit since President Trump has vowed to pull the United States out of the landmark 2015 Paris climate agreement, a process that takes four years. While this action would leave the United States entirely isolated as the only nation on Earth that’s not a party to the agreement, many other nations’ leaders are worried about the Trump effect—the idea that the U.S.’s planned withdrawal will allow other nations to also weaken their commitments to the Paris deal.

Well, at this year’s climate change conference, African negotiators, activists and youth are particularly vocal about the need for urgent action to mitigate the most devastating effects of climate change. The continent is expected to suffer more from climate change than any other on Earth. Many African countries are already feeling some of the worst effects. This summer, flooding and mudslides in Sierra Leone killed more than a thousand people, while extreme drought has left millions of people at risk of famine in Kenya, Somalia and Ethiopia.

Kumi, it’s great to have you back on Democracy Now!

KUMI NAIDOO: Great to be here.

AMY GOODMAN: So, we’ve had you on as head of Greenpeace International. Now you’re starting a new organization. Talk about what is happening in Africa and why you see the need for this group.

KUMI NAIDOO: Well, firstly, people need to understand that climate impacts are already devastating the African continent. The difference with us compared to, say, hurricanes that happen or typhoons that happen in Southeast Asia, the main impacts of climate at the moment is climate-intensified drought and climate-intensified desertification. And these are not cataclysmic media moments like a typhoon or a hurricane is. But people need to understand that the terrible injustice of this is that the people that are paying the price, the first, most brutal price, with their lives, with their livelihoods, with their soil, with their water and so on, are those that lead the most low-consumptive lifestyles anywhere on the planet.

And the lack of action that we have seen from the dominant parts of the world suggests to us that, in fact, what we are dealing with is a problem that you could call climate apartheid, that, in fact, if you look at where the problem has been caused mostly and where the impacts are, that it is people of color, whether it’s in the Pacific, whether it’s in Africa, whether it’s in the Middle East and so on, are in the front edge. I guarantee you that if it was flipped, we would probably have much more action, because the reality is that, as Africans, we recognize that racism is alive and well at the global level, and we see it in places like the United States in a very powerful way now. And part of getting a climate solution is about actually valuing human life in an equal way across the planet.

AMY GOODMAN: Can you talk about the Trump effect and if there is one? This is the first climate summit where the president of the United States has said he’s pulling the United States out of the accord, leaving the U.S. alone in the world as the only country not part of the Paris climate accord. What effect do you see that having?

KUMI NAIDOO: I think it’s had a negative and a positive effect. The negative effect is that it’s left the majority of Americans today feeling their president is not acting in their interest, is giving up global leadership and so on.

The fact that he has gone after the Paris climate accord, we must remind ourselves—and people seem to have forgotten about this at this negotiations—that Paris was not a perfect accord. It simply gave us the chance to live to fight another day. Right? It got the negotiations back on track. We need to go beyond the Paris commitments, and we built into the Paris accord review mechanisms and to increase, you know, ambition and so on.

When I tongue-in-cheek say he’s also been positive is that because Donald Trump is reviled by the majority of Americans, is totally reviled by people across the world, it’s actually got people who never really took interest and passion from climate saying, “Well, you know, if Donald Trump is against this accord, there must be something good in it.” And if you look at the United dates, you can see how governors, local government leaders and so on are stepping up to say, “We will meet those commitments without, you know, necessarily the support of the federal government.”

AMY GOODMAN: You know, we have something unusual happening right now, Kumi, right behind you. You can just turn around. David Banks, the U.S. representative for President Trump, his energy adviser, is standing right there. Our producer Nicole Salazar is asking if he would come over and join this discussion. He’s the one who had the only U.S. summit. Would you come on over, David, to join this discussion? David, if you’d just come for five minutes to join us to talk?

AMY GOODMAN: OK, very good. He’s saying that he’s tempted. Come on over. OK, we’re trying to get him to come over.

KUMI NAIDOO: Well, this is the first time I’ve had this in an interview, and it’s great. And let’s just say that those of us who believe that the Paris accord must be met and exceeded, we are completely willing to dialogue and educate President Trump and the people around him, because it’s clear they are in need of a desperate injection of reality. They have created a little bubble for themselves, and they are living in this bubble. It’s clear. I mean, you know, even Syria has signed the accord, you know?

AMY GOODMAN: And Nicaragua before, which hadn’t signed because they thought it was too weak.

KUMI NAIDOO: Because of—it’s too weak, yeah. So—

KUMI NAIDOO: And they’ve signed it not because they think the Paris accord is great, but they believe that the global community has to work together to address this problem.

And Donald Trump and the people of America need to understand that what he’s doing, he is actually undermining American economic interests, apart from anything else. If you look at meetings I had when I was at Greenpeace with Chinese leaders, it comes out very clear that they have come to a conclusion that the successful countries of the future are not those that dominate the arms race or the space race. The successful economies of the future are going to be those that dominate the green race, those that get as far ahead of the green technology race now. That is why you find China, for example, 90 percent of solar panels installed in Europe comes from China. And China is making—I would prefer that panels be installed in China, but that’s a different story. But they have turned the crisis of climate change into an economic competitive advantage. And so long as Donald Trump and the small number of people around him that are pushing him in a particular direction stick to the position, they are not only undermining the possibility of life on the planet, they’re also undermining the short-, medium- and long-term economic interests of the United States.

AMY GOODMAN: I mean, interestingly, you know, President Trump is a proud climate change denier. He has called it a “Chinese hoax.” But, in fact, sadly, climate change is a Chinese bonanza, because the U.S. isn’t supporting alternative energies. I believe the environmental adviser for President Trump, Kathleen Hartnett White, who just had her confirmation hearings before the Senate—we’ll see if she’s actually confirmed—has said that—you know, agrees with President Trump and says carbon dioxide is a plant nutrient and that solar power is “parasitic.”

KUMI NAIDOO: Wow. So, you know, what you see happening in the Trump administration is a really very bad dose of cognitive dissonance, where the science is crystal clear. And if you didn’t want to deal with the complexity of the science, all you have to look at, what has happened in the last decade. In the last decade, we’ve had more than a 100 percent increase in extreme weather events. You know, people say, yes, there always was hurricanes. True, there was always hurricanes, typhoons and so on. But what you find now, without any reasonable doubt, the frequency of such events is increasing. The strength of and the impact and the devastation caused is breaking record after record. And we need understand that this is not about, you know, saving the planet. People need to understand that the struggle that we are engaged in here is to ensure that our children and their children’s futures are protected. And Donald Trump is betraying not only the American future generation, but people around the world.

And I want to say, over your right shoulder, again, David Banks remains there, though he hasn’t walked over a few feet to sit down next to you to have a debate. Yesterday, in the panel, he said he was fully accessible. We’ll see what happens, if we can get him this week. Again, he is Donald Trump’s special assistant to the president, international energy and environment.

But we’re going to play that session and the walkout that took place, the actual revolt, leaving the room three-quarters empty, when David Banks and other—and the White House, the Vice President Pence’s representative talked about supporting Donald Trump and pulling out of the climate accord, but also their corporate executives. The only panel here of the U.S. government were representatives of nuclear, gas and coal. And that’s what you’re going to hear next. And then we’ll get Kumi Naidoo’s response. And if we’re lucky, David Banks, the president’s representative, will join us, as well. Stay with us. 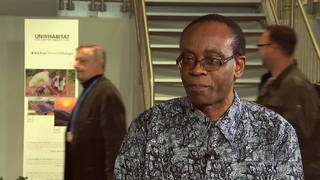