Broadcasting from the United Nations climate summit in Bonn, Germany, we speak with Nigerian environmental activist Nnimmo Bassey about global warming in Africa and the role of climate change in displacing farmers and ranchers, who, in some cases, join the ranks of Boko Haram.

StoryNov 10, 2021This Will Set Africa on Fire: Nnimmo Bassey of Nigeria Blasts Progress of Talks at U.N. Climate Summit

AMY GOODMAN: You said you didn’t think anything else could horrify you about what the U.S. is doing right now.

AMY GOODMAN: You’ve been at COP for many years. This is the first U.N. climate summit in which the U.S.—well, the new president, Donald Trump, has said he’s pulling the U.S. out of the U.N. climate summit. Your response to this, the significance of this and what it means for Africa?

NNIMMO BASSEY: You know, when the announcement came, my first reaction was “Well, the U.S. has never really been a positive force in the Conference of Parties on Climate Change.” The U.S. has consistently, right from Kyoto in 1997, been—they have introduced market forces. In 2009 at Copenhagen, the U.S. brought the COP Copenhagen Accord, driving the discussions from having binding regimes to voluntary regimes, which is what we ended up having to define in Paris and what is being negotiated now.

So, when Trump pulled out, my fear was that he was—the pulling off wasn’t taking immediate effect, but rather will take a couple of years before it happens. So, within the time, the U.S. will do more harm, more harm than they will have done if they had just left immediately, Trump said, “We are leaving.” And so, this is a big problem for the world, because it means that the problems that nations in Africa and vulnerable small island states are facing from storms, hurricanes and typhoons, they’re going to face more, and that there’s no hope that a rich polluting nation like the U.S. would do its own fair share to help mitigate these problems.

AMY GOODMAN: And Nigeria, the largest oil-producing country in Africa, how climate change affects your nation, the most populous nation in Africa?

NNIMMO BASSEY: Oh, yes, we’re having real serious impacts. And we’ve been discussing with the government on this, and that Nigeria needs to take action, not just depending on what others may help them to do. For example, the northern part of Nigeria is highly impacted by increasing desertification. Nigeria is close to the Sahara Desert. And we’re having 11 states in northern Nigeria being impacted by desertification. In the south, we have a sea level rise combined with—combined with heavy pollution from the oil industry. And so, you’re having people being displaced from the south and displaced from the north. When you hear about violence in the north, it’s like the Boko Haram violence. A lot of the conflict that we’re having between herdsmen and farmers is caused by climate impacts, not religious.

AMY GOODMAN: Why do you say climate impacts? Boko Haram, people would be very shocked.

NNIMMO BASSEY: Oh, yeah, they did that. They have done horrible things. They’re still using little girls as suicide bombers, which is horrible. And, I mean, whatever they’ve done cannot be defended. But what gives them the army that they’re working with? Is it climate impact that is dispossessing the people? People are—Lake Chad was once 25,000 square kilometers, now only 1,500 square kilometers. And so, a lot of people—the fisherfolks, the farmers, the pastoralists—have been displaced, looking for grazing land, because we don’t have ranches like they have in the U.S. We have free-range cattle. And so they’re moving southwards and having conflicts with farmers. Really, the middle part of the country, there is a lot of bloodshed due to this kind of conflict, clearly traceable to global warming.

AMY GOODMAN: Well, we want to thank you, Nnimmo Bassey, for joining us today and for being here, I think probably longer than we have been, at all the U.N. climate summits back to Copenhagen. I’m used to seeing you getting arrested here at some protest.

AMY GOODMAN: Nnimmo Bassey, Nigerian environmental activist, director of the Health of Mother Earth Foundation, wrote the foreword for the report by Corporate Accountability titled “Polluting Paris: How Big Polluters Are Undermining Global Climate Policy.” We’re going to talk about that report in just a minute. He’s also author of the book To Cook a Continent. Stay with us. 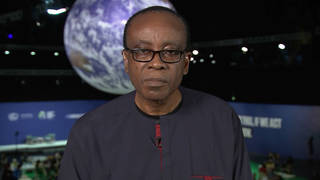 This Will Set Africa on Fire: Nnimmo Bassey of Nigeria Blasts Progress of Talks at U.N. Climate Summit