Yes or No: Amy Goodman Asks Trump’s Fossil Fuel Reps at COP23 If They Support US Quitting Paris Deal

On Monday, activists and Democratic lawmakers at the U.N. climate summit in Bonn, Germany, staged a full-fledged revolt Monday when the Trump administration made its official debut at this year’s conference with a forum pushing coal, gas and nuclear power. The panel was the only official appearance by the U.S. delegation during this year’s U.N. climate summit. Democracy Now!'s Amy Goodman asked the corporate representatives pushing nuclear, gas and coal whether they agreed with Trump's decision to pull the U.S. out of the climate agreement.

FRANCIS BROOKE: All right, this is—this is our—this is our last question before we have to wrap up.

AMY GOODMAN: Quick question, just a simple yes or no from each of you: whether you support President Trump pulling the U.S. out of the Paris climate accord? If we could begin with Lenka?

LENKA KOLLAR: The question was?

AMY GOODMAN: Whether you support President Trump pulling the United States out of the Paris climate accord?

LENKA KOLLAR: No, I don’t support it.

HOLLY KRUTKA: I know you want yes or no, but our company’s statement wasn’t a yes or no, so please just allow me to say what it is. We did not ever weigh in. There was reports, actually, that we weighed in in both directions. Our opinion was that it’s up to them. There’s a lot to decide. But whether or not the U.S. is in the Paris climate agreement, we will continue to work on low-emissions technologies for coal.

AMY GOODMAN: And you, personally, Holly?

HOLLY KRUTKA: Gosh, I’m not really a policy person. I’m sorry, that was a cop-out. You’re right. I, personally—I’m not here to represent myself, so come talk to me afterwards.

AMY GOODMAN: Yes or no, are you for or against?

HOLLY KRUTKA: I’m not going to answer for my personal opinion.

AMOS HOCHSTEIN: I think I have the easiest task. I don’t think Dave or Francis expect me to say anything else. I worked for the Obama administration. I supported the Paris Agreement fully, thought it was a great achievement for the president.

AUDIENCE MEMBER: Yes or no!

BARRY WORTHINGTON: The U.S. Energy Association did not take a position before the president pulled out of Paris. As soon as he pulled out of Paris, we issued a statement saying that he should renegotiate Paris. From my own personal standpoint, the answer is yes, because of the reasons I laid out. We’re—

AMY GOODMAN: You support Trump pulling the United States out.

BARRY WORTHINGTON: We’re achieving the emissions reductions goals without having the regulatory burden. We’re doing it for other reasons.

FRANCIS BROOKE: Thanks, Barry. Now we’re going to go to closing from our speakers.

FRANCIS BROOKE: Can you—we are not here—

FRANCIS BROOKE: I mean, pretty clearly, we both work for the administration, so that’s who we’re here to represent, and it’s not going to change anything. So we’re going to go through closing now.

FRANCIS BROOKE: So we’re going to start with Barry Worthington.

AMY GOODMAN: Yes or no?

FRANCIS BROOKE: He’s going to close for us.

DAVID BANKS: I work for the president of the United States.

AUDIENCE MEMBER: So is it a yes or a no?

AMY GOODMAN: And that was David Banks, White House special assistant for international energy and environment, the person we’ve been trying to get on the show who’s been standing next to our broadcast. Before that, Francis Brooke, policy aide in the Office of Vice President Mike Pence. Of the four corporate representatives pushing nuclear, gas and coal, two of them said they were—well, Lenka Kollar of NuScale energy and Amos Hochstein of Tellurian disagreed with Trump pulling the U.S. out of this climate agreement. Holly Krutka of Peabody wouldn’t say, and Barry Worthington of the U.S. Energy Association agreed with President Trump’s withdrawal. That was the final question at the Trump administration’s one and only panel here at the COP23. 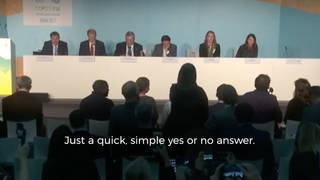