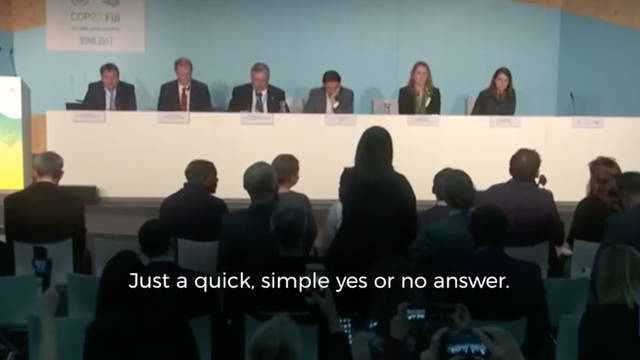 On Monday, activists and Democratic lawmakers at the U.N. climate summit in Bonn, Germany, staged a full-fledged revolt Monday when the Trump administration made its official debut at this year’s conference with a forum pushing coal, gas and nuclear power. The panel was the only official appearance by the U.S. delegation during this year’s U.N. climate summit. Democracy Now!'s Amy Goodman asked the corporate representatives pushing nuclear, gas and coal whether they agreed with Trump's decision to pull the U.S. out of the climate agreement.

The Weather Channel has published a video featuring Amy Goodman questioning the panelists:

The next day, Amy Goodman caught up with Trump climate adviser David Banks, who moderated the panel, and asked him about human-caused climate change and government subsidies for fossil fuel extraction. Watch here.

And, click here to watch Democracy Now!’s full report on the revolt activists staged Monday at the only official U.S. event at the U.N. climate talks. 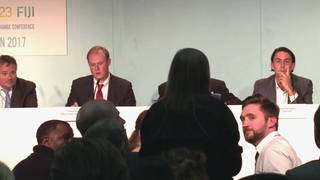 Yes or No: Amy Goodman Asks Trump’s Fossil Fuel Reps at COP23 If They Support US Quitting Paris Deal