Broadcasting from the U.N. climate summit in Bonn, Germany, we look at protests underway against oil, coal, gas and nuclear power. Indian activists are demonstrating against India’s largest nuclear power station, the Kudankulam plant in India’s southern state of Tamil Nadu. Activists also disrupted a presentation by the European Investment Bank at an annual corporate conference held alongside the climate summit here in Bonn, with a protest against the construction of the Trans Adriatic gas pipeline, known as TAP, which is slated to run from the Greek-Turkish border, under the Adriatic Sea and into Italy. Meanwhile, activists had a special welcome ready for German Chancellor Angela Merkel on Wednesday before her address to the conference.

AMY GOODMAN: We’re broadcasting live from the U.N. climate summit in Bonn, Germany, COP23. COP is a U.N. term that stands for Conference of Parties. This year is known as the first “Islands COP,” with Fiji presiding over this year’s summit. The event itself is being held in Bonn, Germany, because of the logistical challenges of hosting tens of thousands of people in Fiji at the start of the South Pacific cyclone season. Bonn is the former capital of West Germany and the birthplace of the composer Ludwig Beethoven.

Well, protests against oil, coal, gas and nuclear power continue here at the U.N. climate summit. On Tuesday, Indian activists protested against India’s largest nuclear power station, the Kudankulam plant in India’s southern state of Tamil Nadu. Also Tuesday, activists disrupted a presentation by the European Investment Bank at an annual corporate conference held alongside the climate summit here in Bonn. The activists were protesting the construction of the Trans Adriatic gas pipeline, known as TAP, which is slated to run from the Greek-Turkish border, through Greece and Albania, under the Adriatic Sea, into Italy.

Today, German Chancellor Angela Merkel is slated to address the United Nations climate summit. This morning, activists had a special welcome for her.

AMY GOODMAN: We’re in the main plenary area of the U.N. climate summit. And a group of activists have just rolled out a red carpet—a little different than dignitaries are used to. It says on it, “Keep it in the ground,” with a finger pointing down. We’re joined now by two of the activists who rolled out that red carpet. Can you tell me your name?

JOSEPH-ZANE SIKULU: My name is Joseph, and I’m from Tonga.

LUSIA FEAGAIGA: And my name is Lusia, and I’m from Samoa.

AMY GOODMAN: And can you tell me why you rolled out this carpet?

JOSEPH-ZANE SIKULU: It says “Keep it in the ground.” And today, a lot of politicians are going to be coming into this space. But we especially wanted to welcome Chancellor Merkel. She’s coming to these discussions. There’s a lot of discussion in Germany at the moment about the coal phaseout. And we really just want to send that message that we need to keep coal in the ground. We’re asking them to transition away from fossil fuels.

AMY GOODMAN: Can you talk about how climate change affects Samoa?

LUSIA FEAGAIGA: In the Pacific, with the sea levels rising, a lot of our lower-lying atoll countries are being affected. I mean, Marshall Islands is two meters above sea level; Tuvalu, probably three. And once king tides come in, it’s most likely that their villages will be flooded with saltwater because of the rising sea levels.

AMY GOODMAN: And how does it affect Tonga?

JOSEPH-ZANE SIKULU: In the same way. I think one of the biggest things people are worried about at the moment is food security. People are having to find new ways to grow their food, or the fish that they used to fish for before have gone because of the ocean acidification and because the waters have warmed and the coral is bleaching. So, finding new ways to grow food, and especially water security, is a really big issue right now.

AMY GOODMAN: Are you afraid of losing your countries altogether?

LUSIA FEAGAIGA: Definitely. I mean, the risk of losing our homelands is real. But if we can at least get our government officials to listen and to keep it in the ground, then maybe we get to keep our homelands for a bit longer.

AMY GOODMAN: And do you have any message for President Trump, who has called climate change a hoax and has vowed to pull the United States out of the Paris climate accord?

JOSEPH-ZANE SIKULU: Yes, we’re asking him to stand down. If that is the stance he’s going to take, then stay out of these negotiations and stay out of these conversations and let the leaders who are actually here to make a change do that, and give them that space to do so.

LUSIA FEAGAIGA: And also for President Trump to come to the Pacific and have a look for himself. It’s not just Paradise. We’re people, as well. And he’ll be able to see the way that we live and our livelihoods, so maybe that will help change his stance.

JESSE BRAGG: My name is Jesse Bragg, and I’m with Corporate Accountability. On Monday, we, alongside the Pacific Climate Warriors, delivered a petition from 100,000 people in the United States, on behalf of millions more around the world, demanding that the U.S.—because they’re not bringing anything to the table here besides the fossil fuel industry’s agenda, demand that they get out of the way of countries actually trying to make progress here, stop pushing the fossil fuel agenda and stop bogging this process down, so we can make progress on this agreement, because the world needs it.

AMY GOODMAN: And what was the response of the Trump administration?

JESSE BRAGG: Well, three different officials from that office opened the door, recognized who we were and then shut the door. They did accept it, but they refused to discuss it. They just don’t want to face up to the reality that they are the only—now the only country that has no interest in being part of this process.

AMY GOODMAN: Also this morning, in the nearby city of Cologne, Germany, activists launched a blockade of the Weisweiler coal power plant. Now, seven hours later, large parts of the plant are still shut down. 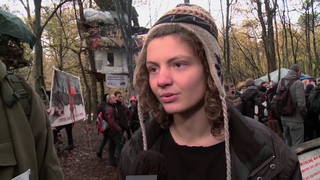