The Trump administration plans to revoke a special immigration program for nearly 60,000 Haitians, many of whom came to the United States after the devastating 2010 earthquake in Haiti. Their temporary protected status, or TPS, will now end in July 2019. We speak with Marleine Bastien, executive director of FANM, Haitian Women of Miami.

JUAN GONZÁLEZ: We end today’s show with news that the Trump administration will revoke a special immigration program for nearly 60,000 Haitians, including many who came to the United States after the devastating 2010 earthquake in Haiti. Their temporary protected status, or TPS, will now end in July 2019.

AMY GOODMAN: For more, we go to Little Haiti in Miami, where we’re joined by Marleine Bastien. She’s executive director of FAMN, Haitian Women of Miami.

Marleine, welcome to Democracy Now! Can you talk about what this decision means?

MARLEINE BASTIEN: I could hardly hear you.

AMY GOODMAN: Could you talk about what the TPS—the revoking of TPS for 60,000 Haitians, what does it mean?

MARLEINE BASTIEN: Well, that means that thousands of Haitian families who have been living here, for an average of eight to 29 years, will probably have to pack their bags in a few months to be deported to a nation in turmoil. So, of course, this news has thrown the Haitian families in a high level of anxiety and confusion. Many of them have U.S. citizens—27,000 U.S.-born children. And it is a very hard choice that they’ll have to make.

JUAN GONZÁLEZ: And what about the argument of the Trump administration that this was supposed to be a temporary status, not a permanent one, and that the crisis in Haiti has abated?

MARLEINE BASTIEN: Yes, we do know that Haiti is still in turmoil, is still reeling from the worst crisis in modern history, an earthquake which killed over 200,000 and left Haiti’s infrastructure in disarray. To add insult to injury, an imported cholera epidemic killed over 8,000 and left 1.2 million contaminated. A year ago, Hurricane Matthew destroyed the entire south peninsula in Haiti, killing thousands and then destroying all the crops and livestocks, which resulted in severe food crisis that still exists today. And then, most recently, Hurricane Irma and Maria also wreaked havoc in the north end. So, Haiti has not had a break for years. Even in the U.S., it takes years to recover from an earthquake. FEMA is still helping families as a result of Katrina. So how could you expect a small nation like Haiti to recover after such a grave disaster in less than eight years? So, Haiti has not recovered.

I led a fact-finding mission there in August. And then we produced a documentary called Let Haiti Rebuild. And it shows clearly that Haiti does need time to recover. And it is not in the best interest of the U.S. nor Haiti to deport 58,000 families, who are gainfully employed, who are contributing to Social Security, paying taxes, to deport them to a nation where their lives and the lives of their children, U.S.-born children, could be in danger.

AMY GOODMAN: So, this is then-candidate Donald Trump speaking on the campaign trail last year, when he visited Little Haiti in Miami and vowed to be a champion for the Haitian-American community.

AMY GOODMAN: So, Marleine Bastien, Donald Trump is back in Florida. He’s at Mar-a-Lago for the holiday. There was a protest in front of his house yesterday. Can you talk about what you are demanding now? Did this latest decision come as a shock to you? They had extended TPS before. And what are the plans? People, if they were deported, it would start in a year and a half from now, in 2019?

MARLEINE BASTIEN: Yeah, so, we are demanding that the Trump administration reconsider, because we are trying to help these families stay here on a permanent basis. There are already bills in Congress, introduced by Congressman Nydia Velázquez, Congressman Yvette Clarke and Congressman Carlos Curbelo, that could help these families gain permanent residency. But they do need the time for these bills to go through Congress. We are asking the Trump administration to reconsider, because this—his decision, his arbitrary decision to terminate TPS, at a time when Haiti is still in turmoil, is throwing all these families in complete disarray. It is in the best interest of the U.S. and Haiti for these families to remain. President Trump did promise to be Haiti’s—Haitians’ best champion. And this is not the way to show that he is our champion, to keep his promise.

Many families will spend a somber Thanksgiving tomorrow, because instead of spending happy times with their families, being grateful, they have to think about deportations. Two TPS recipients who spoke at our press briefing yesterday discussed how depressed they are, how one of them was admitted recently in the emergency room, diagnosed with anxiety disorder. So, we hope that the Trump administration will reconsider, will continue temporary protected status. When you look at the conditions of Haiti today, Haiti is a textbook case for TPS. Every indicator prove that Haiti qualifies for a continuation.

AMY GOODMAN: We want to thank you very much for being with us, executive director of FAMN, Haitian Women of Miami.

That does it for our show. Tune in to our specials Thursday and Friday. On Thursday, we remember blacklisted lyricist Yip Harburg. On Friday, we feature interviews with the founder of the #MeToo campaign, Tarana Burke, as well as Carmen Yulín Cruz, the San Juan mayor. 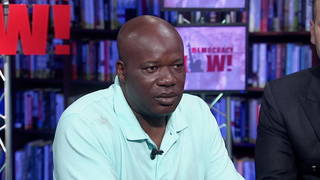