Floating Guantánamos: How the Coast Guard Uses Indefinite Detention to Wage “War on Drugs” at Sea

A shocking new exposé reveals how the U.S. Coast Guard is detaining thousands of suspected drug smugglers they arrest in international waters and keeping them jailed at sea for up to several months before they are charged in a U.S. federal court. Many of the suspects are low-level smugglers from impoverished fishing towns in Latin America. During their imprisonment at sea, they are shackled on deck, exposed to the elements and denied access to lawyers and their families. The increased detentions began when General John Kelly headed the Pentagon’s Southern Command from 2012 to 2016. Kelly is now President Trump’s White House chief of staff, after briefly serving as secretary of homeland security. We are joined by Seth Freed Wessler, the journalist who broke the story in The New York Times Magazine in a piece headlined “The Coast Guard’s 'Floating Guantánamos.'” Wessler is a Puffin fellow at the Investigative Fund at The Nation Institute.

JUAN GONZÁLEZ: We end today’s show with a shocking new exposé that reveals how the U.S. Coast Guard is detaining suspected thousands of drug smugglers they arrest in international waters and keeping them jailed at sea for up to several months before they’re charged in a U.S. federal court. Many of the suspects are low-level smugglers from impoverished fishing towns in Latin America. During their imprisonment at sea, they are shackled on deck, exposed to the elements and denied access to lawyers and their families.

And for more, we’re joined by the journalist who broke the story, Seth Freed Wessler, also a Puffin fellow at the Investigative Fund at The Nation Institute.

AMY GOODMAN: Floating Guantánamos, describe what they are.

SETH FREED WESSLER: Well, the Coast Guard has been deployed deep into the Pacific Ocean to pick up drugs being moved from South America—Colombia and Ecuador—to Central America, mostly cocaine. And in the process of that interdiction work, they are detaining hundreds of suspected smugglers every year and then chaining those men aboard Coast Guard cutters by short chains, chains around their ankles, chained to the decks of these ships or along the side of these ships, and holding them aboard Coast Guard cutters for weeks or months while the ships continue their drug interdiction patrols, and eventually transferring these men back to the United States to face prosecution here.

The numbers of detainees over the last six years have increased dramatically. And even more dramatically, the numbers of people being prosecuted criminally in the United States for this activity that’s happening in international waters, often aboard foreign-flag ships, has increased dramatically. This past year, 700 men were detained aboard these boats, and I spent a good part of the last year talking to many of these men, talking to Coast Guard officials and trying to figure out what’s happening on these ships.

JUAN GONZÁLEZ: Now, Seth, is there a presidential executive order, or how was the policy developed to allow the Coast Guard to go so far afield from the U.S. coast?

SETH FREED WESSLER:* Well, the Coast Guard has long been sort of in the business of interdicting contraband, right? It’s the only branch of the U.S. military that’s also a law enforcement agency. For its several-hundred-year history, it’s engaged in this sort of drug interdiction work. What changed in the ’80s was that, for the first time, the act of smuggling drugs in international waters became a U.S. crime. And then, in 2012, Southern Command, the Department of Defense, launched a program called Operation Martillo to shut down smuggling routes between South America and Central—

SETH FREED WESSLER: For “hammer,” that’s right. So to shut down the smuggling route in the transit zone. And what really shifted is that we sort of started to flood the Pacific with Coast Guard ships and began to prosecute nearly everybody we picked up, rather than returning them to their countries or to Central American countries for prosecution.

AMY GOODMAN: So, tell us about the man you profiled, Jhonny Arcentales. Tell us what happened the night he was taken, where he’s from and what’s happened to him.

SETH FREED WESSLER: So, Mr. Arcentales is a fisherman from the central coast of Ecuador. He has been a fisherman for more than 20 years. He came on sort of hard times and made a fairly rash decision to take a drug smuggling job, moving cocaine off of the northern coast of Ecuador to Central America.

On that trip, this thousand-mile trip, he was spotted by a U.S. Navy airplane that flew off of a Central American base, interdicted, picked up by the Coast Guard and then brought aboard a Coast Guard cutter. And he and the six other men he was smuggling drugs with were held for 70 days aboard a series of Coast Guard and Navy ships, until eventually they were transferred to the U.S. and prosecuted criminally.

AMY GOODMAN: Their families thought they were dead?

SETH FREED WESSLER: So, in many of these cases, these families, their relatives really believed them to be dead. In one case, a Guatemalan man I spoke with, his family actually held a funeral for him, expecting that he had died. Fishermen disappear at sea. That’s a thing that happens. They assumed that they would be receiving a waterlogged body back in their town. Instead, they got a call, more than 70 days later, from—in the case of Johnny Arcentales, from a Florida jail, saying that he had been brought to the United States.

JUAN GONZÁLEZ: Now, you mentioned that they are not given any legal representation or read Miranda rights and so forth. But what about the issue that if the Coast Guard is arresting people that they know are from other countries, they have some responsibility to the governments of these countries to notify them that they’re seizing their subjects?

SETH FREED WESSLER: Well, the U.S. is notifying the countries that the boats are registered to. So, in this case, the United States contacted Guatemala, where the boat that Jhonny Arcentales was aboard was registered. Guatemala gave the U.S. permission to board and detain the men on this ship, on this speedboat.

There were seven men in this group of people. Several of them were Guatemalan, several were Ecuadorean and one was Colombian. They were all brought to the United States after Guatemala signed off. The U.S. has agreements with dozens of Central and South American countries to facilitate this boarding process, and, as a result, has been able to prosecute hundreds of people every year in U.S. court for this activity that’s happening in the sort of legal gray zone of international waters.

JUAN GONZÁLEZ: And which U.S. court do they bring them to?

SETH FREED WESSLER: They bring nearly all of these men to Florida, to courts in the 11th Circuit in Florida, because the 11th Circuit prosecutors and judges there have experience in these cases, there are task forces set up in Florida to take on drugs, and because the 9th Circuit, the California courts, have actually put some restrictions on the kinds of cases that can be prosecuted. And so, instead of moving people up the West Coast to San Diego, which would often be much easier, these men are held aboard these cutters and then either brought through the Panama Canal or flown from Central America to Florida.

SETH FREED WESSLER: Under the Obama administration. Southern Command is responsible for sort of managing the U.S. War on Drugs in Latin America. And under his command, the numbers of people detained by the Coast Guard, which is formally under the Department of Homeland Security—the number of people detained by the Coast Guard grew dramatically. And even more dramatically, the number of people prosecuted started to spike.

Kelly has long been a proponent of this idea that to keep the U.S. safe, we need to push our border outward. We need to operate law enforcement and military activity far, far away from the borders. And that’s really been the strategy that the Coast Guard has been pulled into—

SETH FREED WESSLER: —to operate deep into the Pacific, sometimes thousands of miles from the U.S., and hold people aboard these cutters in the meantime for weeks or months at a time.

SETH FREED WESSLER: It was under his watch at Southern Command that this program grew.

AMY GOODMAN: We’re going to leave it there, but we’ll continue to pursue this story.
Seth Freed Wessler, we’ll link to your story in The New York Times Magazine, headlined “The Coast Guard’s 'Floating Guantánamos.'” 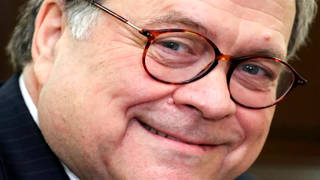