White House Chief of Staff John Kelly has reportedly developed a plan to push Secretary of State Rex Tillerson out of his post and replace him with CIA Director Mike Pompeo. The New York Times reports President Trump would then appoint Republican Senator Tom Cotton to replace Pompeo at the CIA. Cotton has been a key ally of the president on national security matters. White House Press Secretary Sarah Huckabee Sanders denied the reports on Thursday. We speak with Marcy Wheeler, an independent journalist who covers national security and civil liberties at her website EmptyWheel.net. Her new piece is headlined “Throwing H2O on the Pompeo to State Move.”

AMY GOODMAN: We begin today’s show with reports that White House Chief of Staff John Kelly has developed a plan to push Secretary of State Rex Tillerson out of his role and replace him with CIA Director Mike Pompeo. The New York Times reports President Trump would then pick Cotton—that’s Republican Senator Tom Cotton—to replace Pompeo at the CIA. Cotton has been a key ally of the president on national security matters. White House Press Secretary Sarah Huckabee Sanders denied the reports Thursday, as did State Department spokesperson Heather Nauert.

HEATHER NAUERT: Here’s what I know. I don’t work at the White House, but what I can tell you is that Chief of Staff Kelly called our department this morning and said that the rumors are not true, that those reports are not true. … He remains, as I have been told, committed to doing this job. He does serve at the pleasure of the president. This is a job that he enjoys. He is continuing with his meetings. He’s continuing with his calls. He has spoken not only with Foreign Minister Gabriel but also with the—pardon me, with the U.N. secretary-general earlier today. And so he’s continuing with a full schedule.

AMY GOODMAN: President Trump did little to indicate he has confidence in Tillerson. After posing for photographs with the Bahraini crown prince, Salman bin Hamad Al Khalifa, at the White House, reporters asked Trump about his plans to replace Tillerson.

REPORTER: Do you want Rex Tillerson on the job, Mr. President?

REPORTER: He’s here. Do you want him to stay in his job?

PRESIDENT DONALD TRUMP: Thank you very much, everybody. Thank you.

AMY GOODMAN: Tillerson’s tenure at the State Department has been rocky. He’s been criticized for dramatically downsizing the department and gutting the diplomatic corps. More than 100 senior Foreign Service officers have left the State Department since President Trump took office, in what appears to be a forced exodus carried out by Tillerson.

Tensions between the president and the secretary of state have spilled over to U.S. foreign policy. In October, Trump publicly undermined efforts at diplomacy with North Korea initiated by the State Department. After Tillerson said the U.S. had two or three channels open to North Korea’s leadership and he was pursuing dialogue, Trump responded by tweeting, “I told Rex Tillerson, our wonderful Secretary of State, that he is wasting his time trying to negotiate with Little Rocket Man… …Save your energy Rex, we’ll do what has to be done!” Trump tweeted.

Tensions also flared between the two after reports that Tillerson had called Trump, quote, “an F-ing moron” during an NBC interview. Trump responded in an interview with Forbes magazine saying, quote, “If he did that, I guess we’ll have to compare IQ tests.”

Welcome back to Democracy Now!, Marcy. OK, lay out what you understand is happening with Tillerson summoned to the White House yesterday.

MARCY WHEELER: Well, the claim is that Tillerson is going to be ousted, and Mike Pompeo, who is currently in charge of the CIA, will be moved over to the State Department, and then Tom Cotton, who is a senator, who’s on the Senate Intelligence Committee, he would be—he would replace Pompeo at CIA.

And that would have the effect of taking somebody who’s terrible at the State Department, but still better than Pompeo, and putting in two very similar people. Pompeo and Cotton are both pro-torture, pro-Gitmo. They have both talked about prosecuting journalists. And very importantly—and I think this is the key issue—they are both willing to politicize the intelligence on Iran in order to support a more belligerent stance against Iran. And I sort of think that’s what this is mostly about, is, as you said, Tillerson has tried to keep diplomatic channels open with North Korea, but he’s also said that Iran is complying with the agreement that Obama put into place. And both Pompeo and Cotton have made efforts to deny that. And so, this, to me, feels like an effort to get real Iran hawks in both of those positions, State and CIA.

AMY GOODMAN: This is Senator Tom Cotton expressing his views on waterboarding during an interview on CNN.

WOLF BLITZER: That’s in training. But the U.S. doesn’t do it anymore. They’ve stopped.

SEN. TOM COTTON: But we’ve done it in the past. And—

WOLF BLITZER: But do you think the U.S. should do it again?

WOLF BLITZER: So you accept waterboarding?

SEN. TOM COTTON: If experienced intelligence professionals come to the president of the United States and say, “We think this terrorist has critical information, and we need to obtain it, and this is the only way we can obtain it,” that’s a tough call. But the presidency is a tough job. And if you’re not willing to make those tough calls, then you shouldn’t seek the office.

MARCY WHEELER: Right. And as I said, Pompeo has also supported torture and thwarted the publication of the Torture Report. So, you have there two people, plus Trump, because he, of course, came out in favor of torture on the campaign, who have affirmatively said that they would welcome the return to the use of torture that we had under the Bush administration. So that would be a big part of it. And CIA, of course, would be probably in charge of it again, and we’d be back down that route of really counterproductive programs of trying to get intelligence from terror suspects and others.

AMY GOODMAN: And talk about the significance of moving the CIA director to the State Department. And then, again, Rex Tillerson, former head of the largest oil corporation in the world, ExxonMobil, as head of State—they talk about reorganizing, but it’s just a massive gutting of the department. But it’s not as if he’s not doing that for the president of the United States, that that wasn’t the express intent that whoever is there would be doing.

MARCY WHEELER: And there’s no reason to believe Pompeo would do a better job. One of—a couple of the things that Pompeo has been accused of at CIA is bringing religion into public events at the CIA. Cotton would probably continue those at CIA. But Pompeo would do the same, presumably, at State. He has de-emphasized diversity—really important at both CIA and State Department. We would assume that he would continue to do that there. So, it’s—you know, there’s no reason at all to believe that Mike Pompeo would start rebuilding the State Department in a way that we would need to happen. As I said, I think this is really about policy and really about especially Iran.

AMY GOODMAN: So, what’s happening now with Tillerson is this massive shaming that Trump is engaging in, right? He answers the reporters yesterday—”Are you going to fire him?”—by saying, “Rex is here.” He’s brought into the White House. But he won’t answer whether he has confidence in him or whether he’s firing him.

MARCY WHEELER: And this is really similar to what we saw during the summer with Jeff Sessions, right? The reports were that Sessions was going to be fired. Trump did very, very similar things, shaming Sessions publicly. And as a result, Sessions started moving towards opening an investigation into Hillary Clinton again on the Uranium One thing. And I think that—I think that this is a very similar tactic, which is that Trump, his management style is to shame and humiliate his subordinates, and do that as a way to get them back on the policies that he wants. I mean, he shouldn’t have that much control over Cabinet officials, but this is his way of exercising control. That’s my bet, is that he is trying to get Tillerson into a far more belligerent stance versus Iran and North Korea and other things than he thinks is smart. And he’s using the press to do that. That’s at least my read of it. 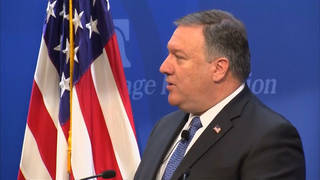