Exposing the predatory behavior of powerful men like Hollywood mogul Harvey Weinstein has helped open the space for millions to share their stories of sexual harassment and sexual violence. But while all women are at risk, women who are not public figures are often more vulnerable if they call out their abusers. We look at how sexual abuse also thrives in low-wage sectors like farm work, hotel cleaning and domestic work, where workers are disproportionately women of color and immigrant women and are highly vulnerable to sexual harassment and sexual violence. We are joined for an extended conversation by Tarana Burke, founder of the “Me Too” movement and one of the women featured in Time magazine’s Person of the Year issue; Alicia Garza, co-founder of Black Lives Matter and strategy and partnership director for the National Domestic Workers Alliance; and Mily Treviño-Sauceda, co-founder and vice president of the National Alliance of Women Farmworkers.

StoryOct 19, 2022Rep. Cori Bush on Being Raped, Her Abortions, Police Brutality & Her Journey from Activism to Congress

AMY GOODMAN: This is Democracy Now!, democracynow.org, The War and Peace Report, with Part 2 of our conversation about women who survive sexual harassment and assault, and speak out. I’m Amy Goodman, with Nermeen Shaikh.

NERMEEN SHAIKH: On Wednesday, Time magazine announced the 2017 Person of the Year goes to the women who have spoken out against sexual assault and harassment, sparking an international movement.

AMY GOODMAN: It calls the group “the Silence Breakers,” includes Hollywood actresses, journalists, farmworkers, hotel cleaners, women who want to remain anonymous and women who are willing to be named.

For more, we continue with our conversation with Tarana Burke. She is the founder of the “Me Too” movement, who coined that term. Mily Treviño is with us from Palm Springs, California, Mily Treviño-Sauceda. She is one of the founders of the National Alliance of Women Farmworkers. And Alicia Garza joins us from Berkeley, California, with the National Domestic Workers Alliance, co-founder of Black Lives Matter.

In Part 1 of our discussion, we talked about this incredible moment on the cover of Time magazine, six women, some famous, others not, one not even named, but who have all spoken out against sexual harassment and assault, this at time when President Trump falsely put out that he was going to be named Time “Man of the Year,” a man who is president of the United States, who has been accused by at least 16 women of sexual harassment or assault.

I wanted to start with Alicia Garza about what this moment means, especially for the not famous, the people you represent, for domestic workers, who suffer violence in the places where they work. I mean, some people go to work, and then they go home, and that’s their sanctuary. But these mainly women, mainly black and brown women, have to go into people’s private homes. Talk about the dangers there and what you—how you organize and what you recommend to people how they can remain safe.

ALICIA GARZA: Absolutely. So, some of the big dangers are that, first, these women are working in homes by themselves. This work is incredibly isolating. They’re not working in offices with other people. They’re very much working in someone’s home by themselves, outside of the public eye.

The other big danger that we see is that oftentimes this industry itself is really what we call the wild, wild west. There is not a lot of regulations or clear protections for women in this industry, and really not a lot of clarity about where do you go to report violence or abuse when you’ve experienced it.

And so, what we think is necessary right now is a couple of things. One, we think it’s important to make the laws clearer, and laws that don’t further criminalize survivors, but instead provide a confidential place to be able to share your story and to know that there will be some follow-up and accountability that happens from that.

The other big thing, though, is that I think, before we start to talk about legislating solutions, we also have to talk about changing culture. The fact of the matter is, this type of violence, this type of harassment, is something that’s seen as normal. It’s seen as what happens when you’re just being one of the guys. And, in fact, it’s—there’s a lot of questioning that happens to survivors, particularly those who are low-wage workers, immigrant women, black and brown women, about whether or not they actually experienced what they experienced. And so, what that tells us is that the culture that we live in very much supports and normalizes this kind of violence and behavior towards women. And so, unless we’re able to change that, then it means that laws will continue to be ineffective, because there’s a big gap between what we believe to be normal and commonsense and then how we actually deal with that. So we think that both of those things need to come together.

NERMEEN SHAIKH: Tarana Burke, can you comment on what Alicia said? Specifically, what kind of conversation needs to happen? How can the culture change?

TARANA BURKE: Well, I think the culture change is, one, we have to start with young people, right? We have—this should be a conversation about comprehensive sex education in schools, where we start talking about consent and boundaries and what respect looks like between genders and between individuals, at a very young age. And I just imagine what it looks like if you layer that conversation every year, if that’s required for young people. By the time they graduate high school, you have young people who have been hearing since they were children about what consent is, about respect—right?—about boundaries. So I think it’s really important that we start very young.

I also think that we have to shift this conversation—I’ve said this very many times—from talking about individual people. These are systemic—excuse me—problems that we’re looking at. This sexual violence is so pervasive that it’s not just about individual monsters who are rising up. It’s about a culture that’s been created that allows these men, and women, and whatever perpetrators to behave in the way that they do. And so, it’s not just—I think when we individualize it and start talking about how these individuals are bad people, then it take away from the—like what Alicia was talking about—the culture that’s created that allows these people to do what they do.

AMY GOODMAN: And, Mily Treviño-Sauceda, you are with the National Alliance of Women Farmworkers. One of the six women on the cover of Time magazine—it’s Taylor Swift, Ashley Judd, the famous, high-profile women, anonymous sixth woman, pictured in the company of former Uber engineer Susan Fowler, lobbyist Adama Iwu and Isabel Pascual, who’s a strawberry picker and an immigrant from Mexico, whose name was changed to protect her identity. You have worked in the fields. What do you tell women? How do women protect themselves? Is it about laws? What are the safe places they can go? How much retaliation do they face?

MILY TREVIÑO-SAUCEDA: Thank you for asking that question—or questions.

It’s very easy to say this. We face harassment on a daily basis. And we’re talking about—this is about farmworker women. As a farmworker woman, I was sexually harassed. And because I silenced myself, because of the taboos and because I knew I was going to be blamed, I—it made it worse. So I became much more vulnerable. That meant that I was harassed several more times.

So, what I—what we do, what we do in this movement, is to really talk about in what way we are—we are supporting each other, how—that we’re not alone, that it’s not—it’s very, very hard to even talk about the issue. I know—we know that it’s very shameful, but we really need to make sure that we have the conversation.

We do it in very different ways. We use theater skits. We use art. We use conversational—in the kitchen, in the dining room, where we can talk confidentially, and we give each other some support. And then we make sure that the agencies are there to support the work that we’re doing, so that the women can feel safe and that we—that we just give them the support that they need.

At a national level, what we’re doing is trying to make sure that we bring visibility. We’ve been doing this for more than 20 years. And thank you, thank you, thank you, that this is coming to a part where we’re going to start working together, where we’re saying, “This is enough.” We need to be in solidarity. We need to work together, all different industries, women that—because, yes, there’s a lot, a lot of privilege that we have created for some people, and they feel that they can continue, you know, abusing. And we just need to work together.

Farmworker women are speaking out. But that doesn’t mean that it’s become easier. It’s become harder, because we are talking about things that we were not used to talk about before.

AMY GOODMAN: I want to thank Alicia Garza of the National Domestic Workers Alliance and Mily Treviño-Sauceda of the National Alliance of Women Farmworkers. This is Democracy Now!, democracynow.org, The War and Peace Report. I’m Amy Goodman, with Nermeen Shaikh. 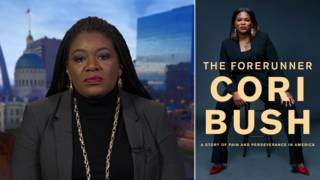