California vs. Trump: Lawmakers Push to Become “Sanctuary State” Despite Threats from Washington

California state Senate President Kevin de León recently introduced a bill to make California a sanctuary state. President Trump responded by threatening to pull federal funds from the state. “If they’re going to have sanctuary cities, we may have to do that. Certainly that would be a weapon,” Trump told Fox News.

AMY GOODMAN: So I want to talk about sanctuary cities and states. Kevin de León, you have introduced a bill to make California a sanctuary state. Last week, Fox News’s Bill O’Reilly asked Trump about your bill.

PRESIDENT DONALD TRUMP: Well, I think it’s ridiculous, sanctuary cities. As you know, I’m very much opposed to sanctuary cities. They breed crime. There’s a lot of problems. If we have to, we’ll defund. We give tremendous amounts of money to California.

PRESIDENT DONALD TRUMP: California—California, in many ways, is out of control, as you know. Obviously, the voters agree; otherwise, they wouldn’t have voted for me.

BILL O’REILLY: So, defunding is your weapon of choice.

PRESIDENT DONALD TRUMP: Well, it’s a weapon. I don’t want to defund a state or a city.

BILL O’REILLY: But you’re willing to do it.

PRESIDENT DONALD TRUMP: I don’t want to defund anybody. I want to give them the money they need to properly operate as a city or a state. If they’re going to have sanctuary cities, we may have to do that. Certainly, that would be a weapon.

AMY GOODMAN: So, Senate President Pro Tem Kevin de León, your response? The defunding of the state of California and what exactly a sanctuary state means?

SEN. KEVIN DE LEÓN: Well, a couple things, Amy. Far from being out of control, we are the sixth-largest economy, not nationally, but in the entire world. We’re an incredible tapestry of different ethnicities and hues and immigrants from all over the nation, from all over the world.

But let me underscore something. I’m going to make up a word, because I think he’s weaponizing federal funding. When the president makes the threats that he has made as of recent, that he’s going to withhold dollars from California, what he’s doing is he’s threatening senior citizens who have the early signs of dementia or Alzheimer’s, or children who have—who are on the spectrum of Asperger’s or autism. He is threatening to punish and to hurt people. That’s mean-spirited. That’s vindictiveness. That is spitefulness. That’s not who we are as a nation. And, just as importantly, it’s illegal. It’s unconstitutional. This is not a monarchy. This is a republic. The president, by fiat, cannot threaten a state like California to withhold dollars. And let me be very clear about something: Those dollars belong to the people of California. They are our tax dollars by hard-working Californians. They are not Donald Trump’s dollars. He’s not giving it to us out of the largesse of his heart because it’s a gift to California. Those are the constituents of the hard-working taxpayers of California.

So, what I’m attempting to do is to make sure that we’re not a cog in the deportation machine of Donald Trump, that in order for Donald Trump to be successful in separating children from mothers, and mothers from children, he needs to commandeer local police departments, he needs to commandeer local sheriffs, he needs to commandeer state highway patrol, to be an extension of the federal immigration authorities. I want to make sure that he doesn’t use our tax dollars, our hard-earned tax dollars, to separate children from their mothers by commandeering our local police agencies as well as resources. I’m clearly aware that federal immigration law is the sole exclusive jurisdiction of the federal government and Homeland Security and ICE. But if you think that the state of California is going to cooperate with you, be very clear about one thing: We’re not going to lift one single finger, nor are we going to spend one single cent, to help this man separate children from their mothers. It’s just not who we are as a state. It’s not who we are as a great country.

JUAN GONZÁLEZ: And, Steve Choi, New York City, obviously, is in the same situation, declaring itself a—Mayor de Blasio has declared New York City a sanctuary city. Your sense of the threats of cutoffs of funds to municipalities, especially in lieu of the fact of how much money New York City provides the rest of the nation in its taxes?

STEVEN CHOI: Yeah. I mean, there is a threat, but I think—I want to start by saying the term “sanctuary” is a little bit misleading. Really, when we are talking about sanctuary, we’re talking about two things. One is a confidentiality policy that says that when city and state employees are talking to people, they’re not asking about immigration status. And we’re also talking about detainer policies that basically say, if people are caught up in the criminal justice system and ICE issues a detainer, those don’t have to be respected. Those are commonsense policies that make our cities and our states safer.

There was a mayor of New York City who believed so strongly in these policies that he filed a lawsuit that went all the way up to the Supreme Court and said, “If you’re undocumented and you’re hard-working, we don’t want you to feel like you’re a fugitive. We want you here in the city.” That was Rudy Giuliani back in 1997. So if it’s good enough for Rudy Giuliani in 1997, it should be good enough for Donald Trump in 2017.

I do want to note, though, that “sanctuary” is a little bit misleading. I think the issue is that we do need to make sure that, in California and New York, cities and states are not doing anything to actually make deportations happen. But there’s nothing that stops ICE—as we saw this past weekend, there’s nothing that stops ICE from coming to New York City, doing raids, engaging in kinds of actions that are going to sweep people up. And so, I think we need to make sure that when people use the term “sanctuary,” they’re not providing a misleading sense of hope that ICE can’t come into these cities and states, because they can.

AMY GOODMAN: Kevin de León, how do you protect people in Los Angeles, in San Francisco, throughout California, in Sacramento, around this issue that, of course, ICE is there, they’re raiding people? Do you think, in fact, Los Angeles was targeted for being a sanctuary city? People are talking about that in Austin. Activists are saying in Texas, you have the governor, who has cut off funds to Austin, because it’s a sanctuary city, and says he wants to put a ban on any kind of sanctuary legislation.

SEN. KEVIN DE LEÓN: A couple things, Amy, as well as Juan, is I do agree with Steve. The terminology, “sanctuary city,” “sanctuary state,” is a bit misleading, because it gives you the perception that you have an invisible force shield, and as long as long as you get behind that invisible force shield, you are safe. That’s not the reality. Federal immigration law is exclusive jurisdiction of the federal government, Homeland Security and ICE. If you are undocumented, you can be detained, and you can eventually be deported—hopefully, after due process.

But the reality is this: It’s very difficult to know if Homeland Security and ICE stepped up their efforts because of Donald Trump, because the lack of transparency and accountability. Now, during President Barack Obama’s administration, there was more collaboration, more cooperation. The reason why is that they didn’t want to instill fear and panic among immigrant communities throughout Southern California and elsewhere. That’s not the case with this new administration. It was very difficult to secure the necessary information to know exactly who they were going after and who they were not going after. That breeds mistrust.

And let me go back to the governor of the state of Texas and his punishment of a city, a great city like Austin, Texas. This shows you how different states are dealing with the issue of immigration, or, the lack thereof, immigration reform. And this is a very clear reflection of the abdication of responsibility, political and legal responsibility, of the Congress to deal with this issue, combine border security as well as a pathway to legal residency and citizenship.

AMY GOODMAN: I want to end—I want to end with Steven Choi, just asking: If ICE comes to your door, do you have to open it?

AMY GOODMAN: And they most usually don’t have one?

STEVEN CHOI: I think what we’ve found is often that ICE thinks that they are going to a certain place, and they’ll call them collateral targets. That’s their term, about people who may not necessarily be the target, who get swept up. I mean, the fact is, we do need to educate folks—

STEVEN CHOI: —because they have rights that are guaranteed, and we need to make sure everybody knows about them.

AMY GOODMAN: I want to thank you, Steven Choi, for joining us, with the New York Immigration Coalition. And thank you to Kevin de León, president pro tem of the California state Senate.

That does it for our broadcast. Democracy Now! produced by Mike Burke. A very happy birthday to Brendan Allen. 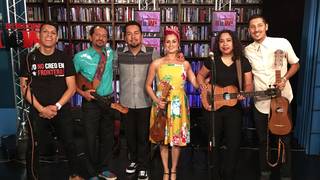