Today, hundreds of fast-food workers plan to converge on the corporate offices of labor secretary nominee Andrew Puzder and demand the fast-food mogul withdraw his nomination or be rejected by the Senate. The Washington Post reports Puzder’s chain restaurants, Carl’s Jr. and Hardee’s, have been the subject of multiple Labor Department investigations over wage theft, which have led the companies to pay nearly $150,000 in back pay to workers and more than $80,000 in penalties. The companies have also been cited with more than 30 health and safety violations. We speak with a shift leader at a Carl’s Jr. in Los Angeles for two years, Maggie Guerrero. She’s with Fight for 15 Los Angeles.

JUAN GONZÁLEZ: We’re looking at labor secretary nominee Andrew Puzder, who has his confirmation hearing scheduled for Thursday. Puzder is head of the company that franchises the fast-food outlets Hardee’s and Carl’s Jr. Today, hundreds of fast-food workers plan to converge on his corporate offices to demand that he withdraw his nomination.

AMY GOODMAN: We’re joined by two guests. We’ve been speaking with Saru Jayaraman, who is co-founder and co-director of Restaurant Opportunities Centers United. Their new report, “Secretary of Labor Violations?: The Low Road Business Model of CKE Restaurant Inc’s Andrew Puzder.” In Los Angeles, we’re joined by Maggie Guerrero, who worked as a shift leader at a Carl’s Jr. for two years.

Maggie, can you talk about your experience there, what your concerns are about Andrew Puzder as labor secretary?

MAGGIE GUERRERO: Yeah, and good morning. Thank you. Well, when I was working at Carl’s Jr., in less than a year, I was sexually harassed. I had a co-worker approach me and tell me that he wanted to have sexual relations with me. And I asked my manager not to schedule me with him anymore and to do something about it. And she said she would talk to him. But even after that, she still managed to schedule me with him two more times. So I brought it up to HR, and they just brushed it off, saying that I came up to them too late.

And then, on top of that, they promised me a raise for my shift leader pay, that I never received. They just kept passing it back and forth to general manager to the district manager, saying, “Ask them. Ask them.” And then, I didn’t want to quit, because I needed to pay for my college education. And I was staying, because I needed that like right now. I had to drop out of school, because I don’t have enough to pay for my college.

JUAN GONZÁLEZ: Well, and in terms of the—how much money did you make when you started there? What were your hours like? What kind of benefits did you have, if any?

JUAN GONZÁLEZ: Well, The Washington Post reports Puzder’s chains, restaurants, Carl’s Jr. and Hardee’s, have been the subject of multiple Labor Department investigations over wage theft, which have led the companies to pay nearly $150,000 in back pay to workers and more than $80,000 in penalties. The companies have also been cited with more than 30 health and safety violations. What were some of the problematic conditions that you had at your place of work?

AMY GOODMAN: Well, last month, workers at Carl’s Jr., like you, Maggie, and also Hardee’s, the two fast-food chains run by Puzder, spoke about widespread wage theft and abuse at his restaurants during a forum that was hosted by Massachusetts Senator Elizabeth Warren and Washington Senator Patty Murray. This is Laura McDonald, a former general manager at Carl’s Jr.

LAURA McDONALD: My name is Laura McDonald, and I’m talking to you today because I worked for Carl Karcher Enterprise for more than 20 years. I actually worked in California. I’ve moved to Tucson recently with my new job. I want to tell you what it’s like to work for Mr. Puzder. Everything at CKE is controlled from the top. There are thousands of pages in manuals that control everything. There’s also strict standards. Every restaurant has to meet the strict standards for wait time, service time for your drive-through, time and a long list of other standards. Meeting all those standards is a huge amount of work. CKE requires all of its general managers to be available 24/7. They specifically tell you that you must always be available by phone to address problems in the restaurant and to answer calls from the district manager. The work is nonstop. I worked more than 60 hours a week there. Until 2009, CKE paid a flat salary to general managers. Even though we do the exact same work as hourly employees, the company refused to pay any overtime or even to pay anything to recognize the fact that we always work more than 40 hours each week.

AMY GOODMAN: So, Saru Jayaraman, if you can weigh in on this hearing that took place, where it took place—did senators hear it, who are going to be deciding the fate of Andrew Puzder, whether he’ll become the labor secretary?

One of our members actually spoke at that hearing, Roberto, and—from L.A., who worked at the company for 18 years and, at the end of an 18-year career at Carl’s Jr., had his paycheck stolen by his manager. His manager literally just signed over his paycheck to herself. He inquired about it and, after inquiring about it, was essentially terminated after a few weeks. So that’s the kind of treatment that this company has given to workers who have worked in the company for a very, very long time.

The hearing was packed. The testimony has been heard by millions of people online. It’s an incredible story—incredible stories that are getting out there. It’s amazing that this man is still being considered to run the very department that, as I mentioned, really should be indicting his company.

NEXTSaru Jayaraman: Trump Labor Nominee Andrew Puzder Does Not Respect Women At All 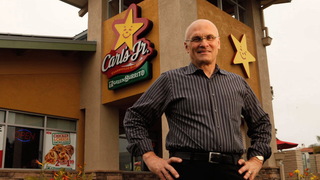