A growing number of asylum seekers are braving freezing temperatures in an attempt to cross from the United States into Canada. Several refugees have suffered frostbite after trekking for hours in sub-zero weather, and aid organizations are overwhelmed. Many of those seeking refuge in areas including Manitoba come from one of the seven countries targeted by Donald Trump’s anti-immigration executive order. They say they are worried about being deported if they remain in the U.S. We speak to Clayton Thomas-Muller in Winnipeg, Manitoba.

AMY GOODMAN: Clayton, you’re speaking to us from Manitoba, where many refugees have been braving freezing temperatures and trekking through deep snow in an attempt to reach Canada from North Dakota. There are reports of at least two men who lost all their fingers to frostbite after a 10-hour journey across the border. This is Omar Jamal of the Somali Community of Minnesota.

OMAR JAMAL: They do it because they think it’s worth the risk; otherwise, they wouldn’t do it. Canadian government will take some urgent steps to address these people’s plight and concern and very serious issue. I hope we can get their attention to do something about this, not watch people suffer.

AMY GOODMAN: That was Omar Jamal of the Somali Community of Minnesota. Your response to immigrants leaving the United States and going over the border, and what he’s describing he faces, Clayton?

CLAYTON THOMAS-MULLER: Well, I think, you know, there has been many disturbing stories about migrants coming across the border in search of a better life and in search of freedom from Donald Trump’s tyranny and the oppressive ICE raids that are taking place and wreaking terror across communities in the United States. You know, Justin Trudeau, being like any politician, has used this opportunity to get some points in the media by saying that our doors are open, but we know that it’s just, you know, not that black-and-white.

I think that for us in the climate justice movement, we understand that within our lifetimes we will see the migration issue grow into the hundreds of millions, you know, because of catastrophic climate destabilization and violent, unpredictable climate weather-related events. And these problems are only going to compound—again, another reason why I think that Trudeau has missed the mark in saying that Canadians don’t want him to set a good example in how we deal with a regime in the United States that is blatantly white supremacist, blatantly Islamophobic, blatantly against working in a good way with its local indigenous population. Justin Trudeau can do better. 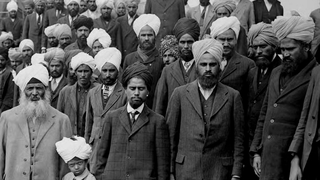