Nearly 2 million Brits have signed a petition calling on President Trump’s official state visit to be canceled. On Monday, thousands of protesters gathered outside Parliament in London as British lawmakers debated whether to deny Trump a formal state visit. We speak to Asad Rehman of Friends of the Earth International. He spoke at the protest in London yesterday.

StoryJul 13, 2018Meet the Activist Who Called Piers Morgan an “Idiot” for Criticizing Anti-Trump Protests in Britain

JUAN GONZÁLEZ: Well, nearly 2 million Brits have signed a petition calling on President Trump’s official state visit to be canceled. On Monday, thousands of protesters gathered outside Parliament in London as British lawmakers debated whether to deny Trump a formal state visit. Inside Parliament, MPs debated for three hours. This is Labour MP Naz Shah.

NASEEM SHAH: In the last 31 days, what we have seen has, in many ways, been chilling. The executive orders that have dominated Donald Trump’s first weeks in the White House have been frightening. And the question many of us are asking: Where does this slippery slope really lead? If we take only one of the groups of people he has sought to divide, those of the Muslim faith, not necessarily distinct to one country or another, his rhetoric has been so broad that even I, personally, as a Muslim, feel attacked and misrepresented. And no doubt, many of my constituents, who make wonderful contributions to this country on a daily basis, feel the same way. We have to take every opportunity to show that his negativity and divisive messages are not going to divide us. And just as importantly, we cannot let them define us.

JACOB REES-MOGG: What complaint did the honorable gentleman make when Emperor Hirohito came here, who was responsible for the Rape of Nanking?

PAUL FLYNN: Certainly, we can’t try to imitate the errors of the past. We should set an example by making sure that we don’t make those mistakes again.

AMY GOODMAN: For more, we’re going to London, where we’re joined by Asad Rehman of Friends of the Earth International, who spoke at the protest outside Parliament yesterday.

Asad, thanks so much for being with us again. We usually speak to you at the U.N. climate summit, wherever it’s happening in the world. Talk about what’s happening right now and what you think is going to happen with the state visit of President Trump.

ASAD REHMAN: Well, since the—both President Trump’s various executive orders targeting the Muslim—with the Muslim ban and, of course, his outrageous comments, or against women and migrant communities, the normalizing of a really—of hatred, bigotry and xenophobia, a large number of British people, and I think right across the political spectrum, find it absolutely abhorrent that this government should roll out a red carpet for President Trump. And the state visit is an honor that is bestowed by the U.K. government. It’s not something that happens automatically. And nearly 2 million people signed a petition asking the government to withdraw its offer of a state visit. Hundreds of thousands of people have now been mobilizing on the streets. In fact, yesterday, there was the fourth big mobilization that there’s been to send a message to this government that they should listen to British people.

And there has been already a commitment that if Donald Trump steps inside this country, and when he does, that there will be a huge mobilization. We intend to put millions of people on the street, not only to oppose Donald Trump and his agenda, but also to hold up a mirror about what’s happening both in the U.K. and across Europe, and, listening to your previous guest talking about the normalization of racism and attacks on migrants and refugees, talking about how we are slowly moving into a space where the far right and extreme right-wing parties are dominating our political space, and how we have to be able to oppose that, and we have to actively oppose that.

And to do that, we need to build a movement, a movement that is much more inclusive and brings together a different spectrum of views and organizations. And that’s why Friends of the Earth, we’re one of the organizers of the Stop Trump Coalition. And we, together with trade unions, Muslim organizations, migrant organizations, have been organizing these huge protests that have been taking place, because we think that the struggle for climate justice, for climate refugees, is a struggle for justice. And it’s the same struggle against—whether we’re talking against sexism, sexist violence, racism or bigotry.

JUAN GONZÁLEZ: And, Asad, I wanted to ask you about Theresa May, the prime minister, who has obviously extending her hand to Trump, and her relationship, her reaction to what’s happened here. And, of course, famously, when she did visit Washington, Trump tried to grab her hand as they were walking in the White House, and she pulled back.

ASAD REHMAN: Well, that image, I think, will live on in most people’s minds, and it sort of sums up the picture of that relationship. I mean, many people felt, you know, that, of course, we have—we’re in a post-Brexit world. And the U.K. has voted in the referendum last year to leave the European Union. There’s a great deal of uncertainty as to what that actually means. Many people are arguing for a hard Brexit, which could lead to real crisis in terms of our economy and jobs. And, of course, the issue of migration is being played very much by some forces to justify a vote to leave the European Union.

Now, all of those things means that this government is basically willing to accept anything from the U.S. administration. And that’s part of what I think has angered so many people, that what the U.K. is hoping, that by cozying up to Donald Trump, by accepting the kind of views that he’s espousing, that somehow we will manage to get a trade deal. Unfortunately, we know what kind of trade deal that will be. The trade deal will be that we will have given up our rights. We would have given up decency. We would have accepted this agenda of hatred. And in return, we would have had a trade deal of deregulation, of weakening labor laws, environment protection. We would had to give up in terms of our controls around our food, our health. And all of those things are just—

ASAD REHMAN: —I think, unacceptable. And all of that is part of the agenda of actually making Theresa May say—take a step back and think again about rolling out this red carpet.

AMY GOODMAN: We want to go back to Monday’s parliamentary debate on whether the state visit of Donald Trump should be canceled. Green Party MP Caroline Lucas said Trump’s climate change denials alone should disqualify him from being invited.

CAROLINE LUCAS: Many of them have raised not only Trump’s misogyny and racism, but also his contempt for basic climate science. Would the honorable member agree that to have a state visit for someone who has shown such effrontery to basic climate science is another reason to say that he should not be coming here?

AMY GOODMAN: So, that was inside Parliament, as thousands were outside. What’s coming of this vote? And what actually will happen?

ASAD REHMAN: Well, the vote is not a binding vote. But I think it was very clear from the speakers who spoke in Parliament yesterday, the number of people who contacted their members of Parliament, that the overwhelming majority of members of Parliament also oppose that this government—the state visit of Donald Trump. We’ve heard, unprecedented, that the speaker of the House, one of the most powerful positions in the House of Commons, has himself said he thinks it’s absolutely inappropriate that if Donald Trump comes on a state visit, that he should be allowed the honor of speaking in Parliament to our Parliament, both the House of Commons and House of Lords. This is an incredible rejection of Donald Trump and his agenda. And we heard it last night, and we heard it from right across the political spectrum. And it’s really now up to the government to listen to those voices, because we have been here in the past, where, of course, we have had a prime minister who has been willing to accept an American agenda, and that led us into a really disastrous war. Two million people marched on the street. And, of course, that prime minister’s reputation is in tatters now. And I think there’s a stark warning to Theresa May that cozying up to Donald Trump could end up with her and her reputation being in similar tatters.

AMY GOODMAN: Well, we want to thank you for being with us, Asad Rehman, spokesperson for Friends of the Earth International. 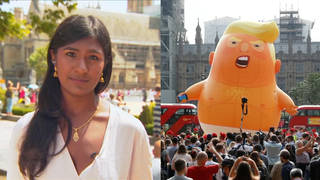