The White House is moving to greatly expand the Department of Homeland Security’s authority to deport millions of undocumented immigrants and to increase the number of immigration and Border Patrol agents by 15,000. We look at how President Obama’s deportation practices set the stage for today’s new crackdown. During his time in office, Obama deported a record 2.7 million people. In 2014, the head of the National Council of La Raza, Janet Murguía, called Obama the nation’s “deporter-in-chief.” We speak to former Department of Homeland Security attorney Margo Schlanger and attorney Cesar Vargas, co-director of DREAM Action Coalition.

AMY GOODMAN: In 2014, the head of the National Council of La Raza, Janet Murguía, calling President Obama the nation’s “deporter-in-chief.”

JANET MURGUÍA: For us, this president has been the deporter-in-chief. Any day now, any day now, this administration will reach the 2 million mark for deportations. It’s a staggering number that far outstrips any of his predecessors and leaves behind it a wake of devastation for families across America. … The president says his administration does not have the authority to act on his own. All we hear is no—no from Congress, no from the administration. But here’s the thing: We won’t take no for an answer.

AMY GOODMAN: So that’s the head of the National Council of La Raza, Janet Murguía, calling President Obama the nation’s “deporter-in-chief.” And, Professor Schlanger, a recent McClatchy piece was headlined “Trump doesn’t need a deportation machine. Obama’s already built it.” You worked for President Obama. What were your thoughts at the time? And do you feel that’s a fair characterization?

MARGO SCHLANGER: Well, I think that President Obama tried very hard to get Congress to sign off on comprehensive immigration reform. And that was a failed effort. And then, when it became clear that that was failing, he implemented DACA. And I think DACA has been a very good step forward. He also implemented a set of practices to prioritize immigrants who were both—people who were very, very recent entrants, who were really caught right at the border, and people who had committed criminal offenses. I think those were appropriate baby steps. And I think that what’s needed is comprehensive immigration reform. So I think that the—that President Obama operated within a really constrained environment and did some really good things in it.

What President Trump is doing is he’s taking all of the—all of the apparatus that was built and funded and insisted on by Congress, and he is ramping it up. He is—you heard it yourself from Spicer. He’s unshackling the discretion of line officers, and now they can deport pretty much whoever they want. And I think that’s an abdication of responsibility by the president and just an appalling way of running an immigration system.

CESAR VARGAS: Yeah, you know, as much as—as much as we blame right now and are concerned of what Donald Trump is doing, the reality is that politics was a critical calculation into all this thing. And the reality is that President Obama did deport more people than any American president. And also, President Obama was reluctant to take action on DACA. And one of the things that we’re seeing, for me, frankly, is that we had a president that we had to push for years. We were deeply involved in the fight to push for DACA, for stopping deportations, and it was the White House who was reluctant to protect many families, versus now we’re seeing Donald Trump, in his first month, taking action to complete everything that he said.

So, you know, I think it’s not about placing blame on President Obama. It’s about holding accountable Democrats, because, at the end, this is exactly what 2016 was all about. It was about the Democratic Party, led by President Obama, who failed to listen to what the concerns of the American people. And people wanted immigration reform, no question about it. The real culprit here are not the immigrant communities, are not the American people. The real culprits here are Congress, Republicans and Democrats, who failed to listen to the American people, to pass immigration reform, to take action on protecting families, to take action to protect the families and to really ramp up the economy. But we didn’t. So we just saw, literally, a president who played politics, both parties, and now we have a president, Donald Trump, who’s just simply doing whatever he feels like and tweeting. And I think that’s not how you govern this nation. So, it’s about holding accountable both Democrats and Republicans, because both of them must take responsibly for a broken immigration system. And now we’re going to see these results play out, sadly.

AMY GOODMAN: At one of the many massive protests that have taken place, this one down at Battery Park, as people, thousands, marched to Federal Plaza, one of the people was holding up a sign that said “France called. They want their statue back.” I want to thank Margo Schlanger for joining us, a professor of law to University of Michigan Law School. And, Cesar Vargas, thanks so much for being with us, co-director of DREAM Action Coalition, New York state’s first openly undocumented attorney. That does it for this segment.

When we come back, we go to Montgomery, Alabama, and to the Anne Frank Center here in New York. Stay with us.

Anne Frank Center: Trump’s Remarks on Anti-Semitism are Too Little, Too Late

NEXTAnne Frank Center: Trump’s Remarks on Anti-Semitism are Too Little, Too Late 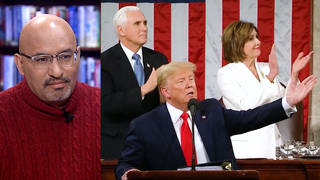