Anne Frank Center: Trump’s Remarks on Anti-Semitism are Too Little, Too Late

Eleven Jewish community centers across the country were hit by another wave of bomb threats Monday. It was the fourth wave of nationwide bomb threats against JCCs in the last five weeks. In total, 69 threats have been reported against 54 JCCs. Meanwhile, at a cemetery in University City, Missouri, the gravesites of more than 100 Jews were vandalized over the weekend. For weeks, President Trump has faced increasing criticism for failing to denounce anti-Semitic and anti-Muslim threats. On Tuesday, Trump briefly addressed the recent wave of anti-Semitic threats. We speak to Steven Goldstein, executive director of the Anne Frank Center for Mutual Respect. The group posted a statement on Facebook titled “Mr. President, Your Too Little, Too Late Acknowledgment of #Antisemitism Today is Not Enough.”

StorySep 25, 2020“Without Love, We Won’t Make It”: Bishop Michael Curry on Faith & What’s at Stake in November

AMY GOODMAN: Eleven Jewish community centers across the country were hit by another wave of bomb threats on Monday. It was the fourth wave of nationwide bomb threats against JCCs in the last five weeks. In total, 69 threats have been reported against 54 JCCs. Meanwhile, at a cemetery in University City, Missouri, the gravesites of more than 100 Jews were vandalized over the weekend. The Southern Poverty Law Center has revealed the number of anti-Muslim groups in the United States tripled last year, from 34 in 2015 to 101 last year. The Southern Poverty Law Center and other groups have said hate groups have been energized by the candidacy and then the election of Donald Trump.

In recent weeks, Trump has faced increasing criticism for failing to denounce anti-Semitic and anti-Muslim threats. Well, on Tuesday, President Trump briefly addressed the recent wave of anti-Semitic threats, after tremendous public outcry that he hadn’t. His comments came after he toured the National Museum of African American History and Culture in Washington, D.C.

PRESIDENT DONALD TRUMP: The anti-Semitic threats targeting our Jewish community and community centers are horrible and are painful and a very sad reminder of the work that still must be done to root out hate and prejudice and evil.

JAKE TURX: What we are concerned about, and what we haven’t really heard being addressed is an uptick in anti-Semitism and how the government is planning to take care of it. There has been a report out that 48 bomb threats have been made against Jewish centers all across the country in the last couple of weeks. There are people who are committing anti-Semitic acts or threatening to—

PRESIDENT DONALD TRUMP: You see, he said he was going to ask a very simple, easy question. And it’s not.

JAKE TURX: It’s an important one.

PRESIDENT DONALD TRUMP: It’s not. Not a simple question, not a fair question. OK, sit down. I understand the rest of your question.

So here’s the story, folks. Number one, I am the least anti-Semitic person that you’ve ever seen in your entire life. Number two, racism—the least racist person. In fact, we did very well relative to other people running as a Republican.

PRESIDENT DONALD TRUMP: Quiet, quiet, quiet. See, he lied about—he was going to get up and ask a very straight, simple question. So, you know, welcome to the world of the media.

AMY GOODMAN: He was telling the Jewish reporter to be “quiet, quiet, quiet.” Well, during a separate news conference, only days earlier, when he was standing with the Israeli Prime Minister Benjamin Netanyahu, President Trump responded to a question from an Israeli reporter about the rise in anti-Semitic attacks—by boasting about his election victory.

Well, for more, we’re joined by two guests. Steven Goldstein, the executive director of the Anne Frank Center for Mutual Respect here in New York. The group posted a statement on Facebook: “Mr. President, Your Too Little, Too Late Acknowledgment of #Antisemitism Today is Not Enough.” And in Montgomery, Alabama, we’re joined by Mark Potok. He is senior fellow at the Southern Poverty Law Center. He authored the group’s year-end report, “Hate groups increase for second consecutive year as Trump electrifies radical right.”

Steven Goldstein and Mark Potok, welcome to Democracy Now! Steven, let’s begin with you. So you just heard that statement he read at the African American museum. Your response?

STEVEN GOLDSTEIN: Well, I actually thought the president lost it, if it was possible to think that he already hadn’t lost it. His response was remarkable for its tin-eardom. This president said absolutely nothing over the weekend, when Jewish gravesites were desecrated. He said absolutely nothing about bomb threats. And he refused even to include Jews in the Holocaust. Then, all of a sudden—

AMY GOODMAN: —he did not cite Jews as having to go—

STEVEN GOLDSTEIN: Amy, astonishing, astonishing. Then, all of a sudden, he wakes up on a Tuesday, decides to give a speech, which, by the way, he read with all the sincerity of a bad method actor. And this is a president who really knows how to speak with passion when he wants to. And he expected our applause simply because he acknowledges anti-Semitism. And I have to ask: Are our nation’s expectations so low that our president, merely by acknowledging anti-Semitism, something other presidents have now done for decades, should receive some applause? And worse yet, his spokesperson, Sean Spicer, yesterday chastised my organization for not applauding and be grateful for the president’s remarks. It’s unbelievable. It was as if little crumbs of condescension were being thrown my organization’s way. Remarkable tin-eardom and remarkable prejudice coming from this administration.

AMY GOODMAN: I want to see if we have this clip of the reporter who asked the question yesterday. This is CBS News foreign affairs and White House correspondent Margaret Brennan questioning White House spokesperson Sean Spicer.

MARGARET BRENNAN: Sean, I want to give you a chance to respond to something, because I think that the president’s remarks and your clarification about where he stands on anti-Semitism is clear. But after that statement was made by the president, the Anne Frank Center released a pretty strongly worded one—

MARGARET BRENNAN: How would you respond to that?

But I think that it’s ironic that no matter how many times he talks about this, that it’s never good enough. Today, I think, was an unbelievably forceful comment by the president, as far as his denunciation of the actions that are currently targeted towards Jewish community centers. But I think that he’s been very clear previous to this that he wants to be someone that brings this country together and not divide people, especially in those areas.

So, I saw that statement. I wish that they had praised the president for his leadership in this area. And I think that, hopefully, as time continues to go by, they recognize his commitment to civil rights, to voting rights, to equality for all Americans.

AMY GOODMAN: So that was Sean Spicer at his White House press briefing. Steven Goldstein?

STEVEN GOLDSTEIN: That was insane. Sean Spicer is living in a parallel universe. First of all, admonishing us that we should praise the president—are we supposed to salute this president? And as far as the words of the president being good enough, who says that to an oppressed community, that our words should be good enough? They simply cannot relate to anyone who looks like themselves. And as far as this president repeatedly calling out anti-Semitism, let alone Islamophobia, racism, sexism, he never speaks about it. So, I don’t know what script Sean Spicer is reading from, but it was not a script from reality. 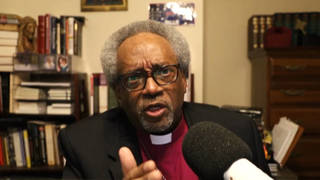